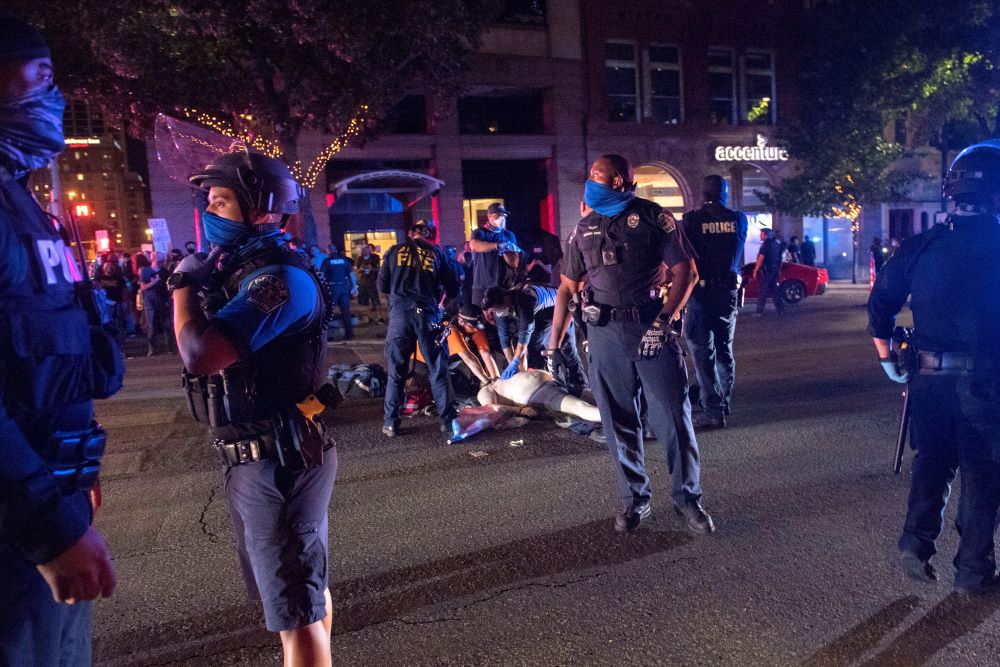 Police and medics try to resuscitate Garrett Foster after the protester was shot by a motorist who drove into the crowd. (photo by John Anderson)

On Sunday night at Fourth and Congress, at the same spot where Garrett Foster had been shot to death the night before, hundreds assembled to remember the person they saw as a friend and comrade, and also a hero and an inspiration for their struggle.

The vigil was followed by another march, like the one the night before (organized in solidarity with the protests in Portland) at which a motorist in a black sedan drove into the crowd. Foster, who was armed with an AK-47-type rifle carried openly, approached the driver, who fired five shots. Another member of the crowd – possibly a volunteer medic supporting the march, according to witnesses and social media reports – then returned fire at the car as it fled. 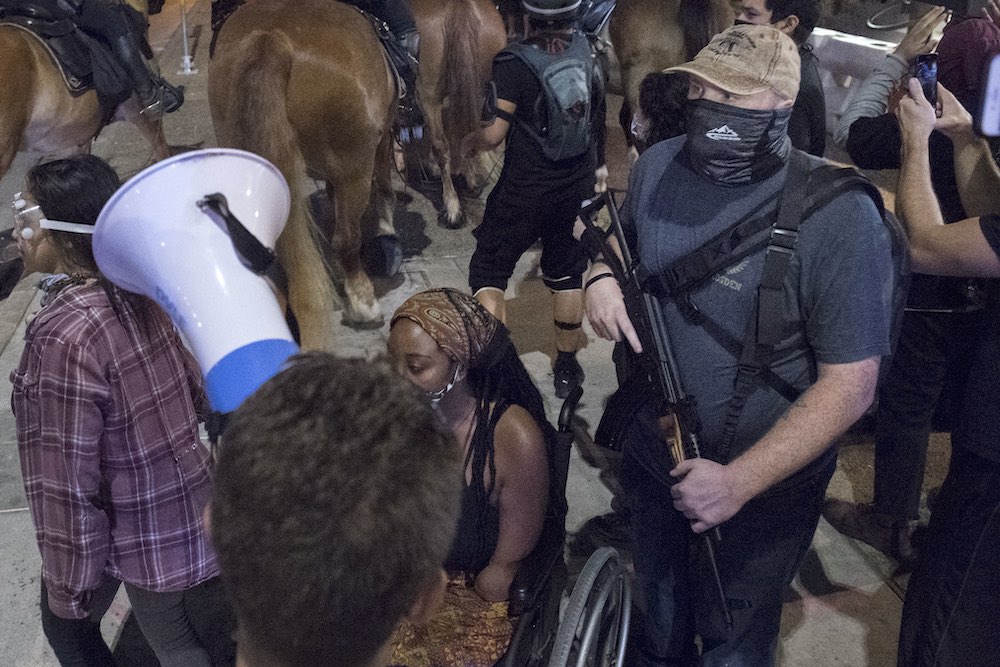 Victim Garrett Foster (with firearm) and his fiancee Whitney Mitchell, surrounded by police during an arrest outside APD headquarters on July 17. (photo by John Anderson)

Foster, who did not fire his weapon, received first aid at the scene before being transported to Dell Seton Medical Center, where he was pronounced dead around 10:30pm Saturday night. Despite early reports of multiple victims, no other injuries have been reported. The motorist, whose name has still not been made public by Austin police, reportedly called 911 after driving away and was brought in for questioning by homicide detectives, as was the second shooter. According to a Sunday evening briefing by Police Chief Brian Manley, both have been released pending further investigation.

Many who gathered on Sunday had marched and rallied alongside Foster and his fiancée Whitney Mitchell throughout the weeks of protests against police violence and white supremacy organized by the Mike Ramos Brigade. With Mitchell present, the vigil featured flowers, candles, incense, and fond memories of Foster, as with other occasions for public grieving that have become sadly familiar.

But the purpose of the MRB protests – that is, the cause for which Foster gave his life – was never far away. As one speaker simply summarized, “Garrett was a hero.” Others described him as a martyr to their cause who died protecting Mitchell and his fellow activists – “a white body given to protect Black lives.” Stepping back from their struggle was simply not an option, most who spoke said. “You can kill the revolutionary, but you can’t kill the revolution,” one of the final speakers told the crowd, which erupted with cheers that could be heard blocks away.

Foster and Mitchell had stood out among the activist crowds since the protests began. Mitchell is a small Black woman, an amputee who uses a wheelchair; Foster was a large white man who was her full-time caretaker. They’d been together since high school, and during his years in the military; they were planning to marry within the next year, and all at the vigil described her as his wife.* According to speakers Sunday night, he began to bring his rifle to the protests after a prior incident in late June when another motorist tried twice to mow down protesters at APD HQ. (Police detained the driver in the department parking garage but also released him.) Foster’s core political leanings, according to those at the vigil and on social media, were not only anti-police and anti-racism but thoroughly anti-government and libertarian. Mitchell, at the spot where Foster was fatally wounded, is surrounded by supporters at Sunday’s vigil (Photo by Jana Birchum)

On Saturday night, APD gave a terse briefing to reporters confirming Foster’s death and noting that the driver was (at that time) in custody. Manley’s briefing Sunday went further, but also included unsubtle comments – praising officers’ efforts to save Foster’s life despite his politics, and noting his death added to our rising violent crime rate – meant (he acknowledged) to influence how Austinites and their City Council feel about defunding, downsizing, and disempowering the police force. (Council voted unanimously in June to adopt a statement of non-confidence in Manley’s leadership; several members have called directly for his resignation, including Jimmy Flannigan, who attended the vigil Sunday night.)

Manley’s efforts to change the dialogue likely won’t be helped by his summary of the shooting itself, which enraged many protesters and MRB leaders. In his briefing, the chief stated as fact that the driver had inadvertently turned into the crowd, which then began to attack the car, and that Foster then pointed his gun at the driver. This all sets up a “stand your ground” defense for the shooter and no doubt is what the motorist told police, but is at odds with the statements of witnesses and bystander video. (Both shooters were licensed, with legal weapons, as was Foster, Manley said*. In his response to the shooting, Mayor Steve Adler tweeted, along with his grief and sympathy, “There are too many guns.”)

The chief implored witnesses and bystanders to share info and video with APD to further the investigation, but much documentation of Saturday’s shooting and its aftermath is already public and has been viewed worldwide. The “revolutionary news service” Tribune of the People has already compiled a five-minute edit of video from multiple sources at the scene and its aftermath. Independent journalist Hiram Gilberto Garcia, who has covered the protests since they began (and who was himself arrested by APD on July 17) captured the actual shooting on his livestream, which has since been picked up by numerous outlets including The New York Times.

Predictably, many pro- or anti-leftist voices on social media have inaccurately amplified the narrative of Foster’s death to fit their needs (such as the hundreds of right-wing posts claiming that Foster not only fired his gun but shot first). But not all of the online attention has been counter-productive. As of just before midnight Sunday, a GoFundMe for the “Official Garrett Foster Memorial Fund,” created to cover funeral expenses and provide ongoing support and health care for Mitchell, had raised $108,000.