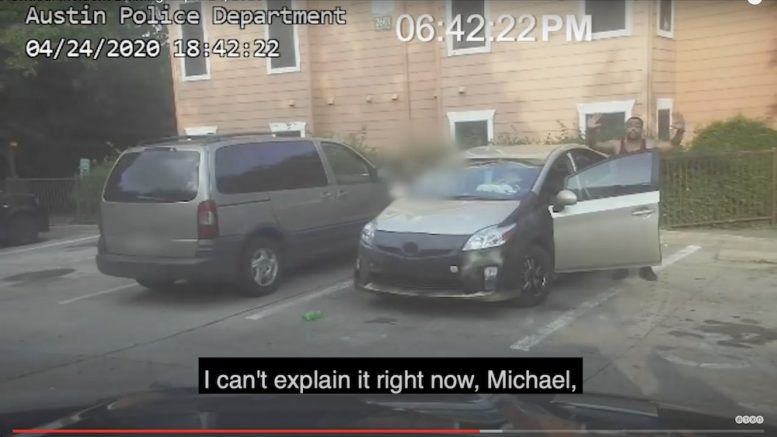 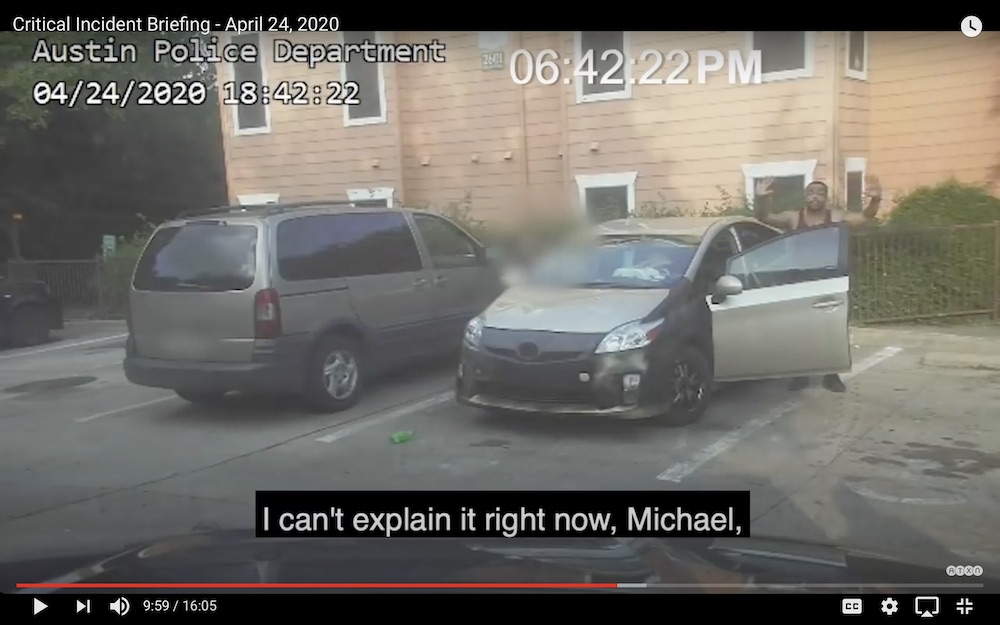 Screenshot from the critical incident video released today to the public

The video, viewable at the bottom of this post, includes footage from body-worn cameras showing Ramos pleading with officers to put down their weapons. The 42-year old man, who was Black and Hispanic, can be seen with his hands in the air, explaining that he does not have a gun and asking: “What the fuck is going on?”

“I can’t explain it right now, Michael,” an officer responds, as the shouting continues from officers with their guns drawn. Ramos can be seen complying with requests from the eight officers sent to the scene – first to put his hands in the air, then to lift his shirt so officers could see if he had a weapon. But the scene becomes more tense as officers refuse to put their weapons down or explain to Ramos why they have approached him with such force.

Audio from the 911 call that led officers to the scene, included in the video, may help explain the aggressive response. In that audio, the caller states that Ramos and a woman – later revealed to be his girlfriend – in the car were “smoking crack and cooking meth.” The caller also says that Ramos and the woman are in a gold and black Prius – a vehicle that had been reported stolen. In 2010 and 2012, Ramos had been arrested for auto theft.

The operator continues to press the caller, and the caller eventually changes the account to say that Ramos was just holding the gun. This was not true. While the officers on scene could not have known at the time if there was a gun in the vehicle, APD detectives failed to find a weapon on Ramos or in the car during a sweep after the shooting. 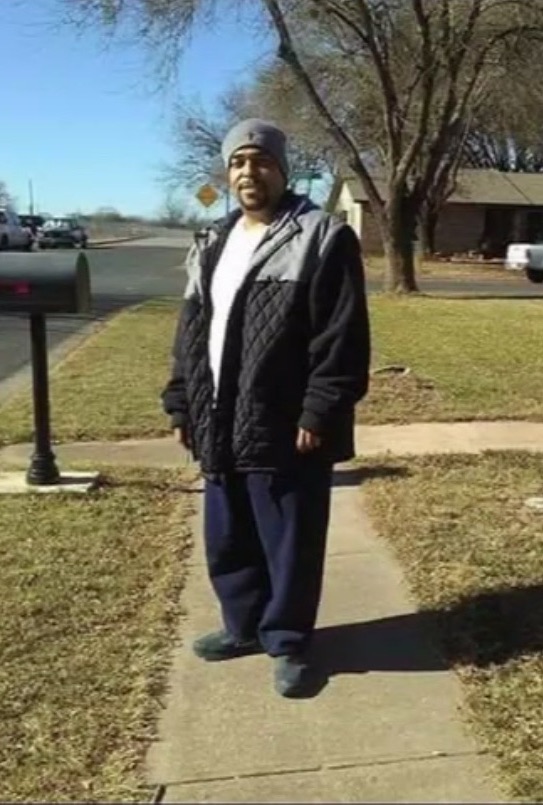 “The video is upsetting, because it confirms what we’ve been saying all along,” Austin Justice Coalition Executive Director Chas Moore told the Chronicle. “Mike didn’t have a weapon and he wasn’t doing anything threatening to officers. It shows he was complying with them as much as he could while guns [are] drawn on him.”

Later in the video, as officers continue to issue demands without explaining why they have surrounded Ramos with weapons drawn, one officer says: “You’re going to get impacted if you don’t listen,” referencing the use of a lead-pellet bag. After hearing that, Ramos begins to move behind his driver side door, which has remained open throughout the interaction. “Impact me for what?” Ramos responds at one point.

Throughout the interaction, Ramos has no idea that an unnamed person called 911 on him and his girlfriend, stating that he was using drugs and in possession of a gun. As he tried to gain an understanding of why he’s been surrounded by armed officers, not one of them attempts to de-escalate the situation by lowering their weapons or explaining why they are there. Instead, the officers attempt to gain further compliance from Ramos by asking him to walk toward them while their weapons are aimed at him. “Man, you all scared the fuck out of me,” Ramos says at one point.

Later in the critical incident video, perspective shifts to footage from the camera worn by Taylor. From that footage, an officer can be heard shouting “impact him” three times before Officer Mitchell Pieper adjusts his position and fires at Ramos with the lead-pellet bag round. As bystander video recorded by witnesses at the scene shows, Ramos then enters his vehicle and begins to drive away from – not toward – the officers at a slow pace. Then, Taylor shoots Ramos three times, killing him.

“It feels like The Twilight Zone,” Rebecca Webber, one of the attorneys representing Ramos’ mother, Brenda Ramos, said of watching the video. “It’s like the officers are in a different reality than the one I live in,” she said, pointing to the lack of any attempt to de-escalate the situation as inexplicable.

The critical incident video is the first to be released under a new policy crafted by APD in collaboration with the Office of Police Oversight and criminal justice advocacy groups. The policy is meant to provide a more transparent and expedient process for the release of video from certain incidents, but in the case of the Ramos video, it still took the department 94 days to release any official footage from the scene. The video was initially set to release on June 22, but City Manager Spencer Cronk delayed publication of the video, because APD officials did not follow policy by including OPO in creation of the video.

Earlier this week, Travis County District Attorney Margaret Moore announced that she would delay presentation of the case against Taylor to a grand jury. In a statement, Moore wrote that she would allow the new D.A. – presumably José Garza, who defeated Moore in the D.A. run-off, and who is heavily favored to defeat GOP nominee Martin Harry in November – to handle the case once taking office in January. “The voters of Travis County have spoken,” Moore wrote. “By overwhelmingly supporting a candidate for District Attorney who ran on a platform of changing how officer-involved shooting cases are prosecuted, I believe the community has clearly stated it would like to see the new administration oversee the prosecution of these cases from beginning to end.”