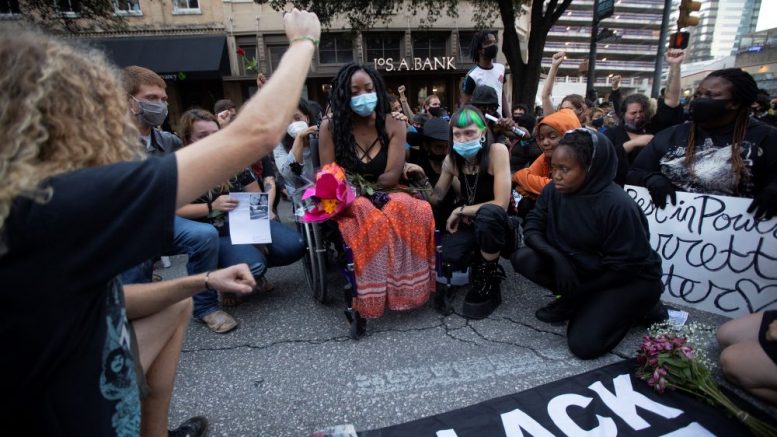 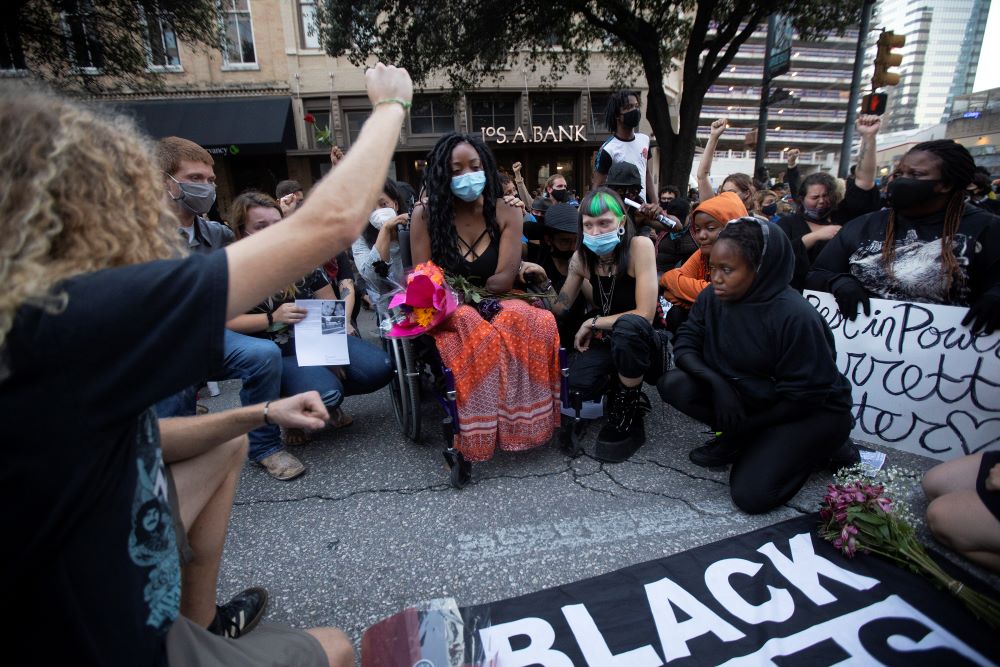 Foster’s fiancee Whitney Mitchell, surrounded by supporters at the site of the shooting, at a July 26 vigil. (Photo by Jana Birchum)

Daniel Perry*, an off-duty U.S. Army sergeant working as a ride-hailing driver, has been confirmed to be the man who killed Garrett Foster on Congress Avenue on Saturday night, according to a statement issued by his attorneys.

In a press release from the law firm of Broden and Mickelsen, their client Perry is identified as a decorated soldier who’d served in Afghanistan and an Eagle Scout who “is devastated by what happened. … Sgt. Perry and his family deeply sympathize with the loss and grief being experienced by Mr. Foster’s family.” The lawyers assert that Perry did not attempt to escape or “flee” and “was fully cooperative with the police following the shooting” and since, and urges “the public to allow the police to conduct a full investigation.”

The statement’s version of the events of July 25 largely aligns with that presented by Police Chief Brian Manley at his briefing the following day – Perry, while working a driver shift, inadvertently encountered the protest organized by the Mike Ramos Brigade, which he did not know was taking place. As marchers beat on the vehicle, Foster “motioned with the assault rifle for Mr. Perry to lower his window. Sgt. Perry initially believed [Foster] was associated with law enforcement and complied with the command.”

At that point, the statement says, Foster began to raise his rifle “in a direct threat to Sgt. Perry’s life” – a fact publicly contested by witnesses who’ve spoken with the Chronicle, but that the attorneys say was confirmed by statements to police from “witnesses who were demonstrating with Mr. Foster.” Realizing that Foster was not law enforcement, Perry “fired on the person to protect his own life,” with his handgun, carried to defend himself if needed from his passengers.

The statement disclosing Perry’s name and version of events comes in the wake of vigorous efforts by activists – both associating themselves with MRB here in Austin, and others of varying allegiances across the social-media landscape – to identify Foster’s killer, in the wake of the Austin Police Department‘s refusal to do so after having released Perry from custody overnight on Sunday. Late Thursday – after the Chronicle‘s print coverage of Foster’s death was published – APD publicists issued a statement again asserting they would not disclose the shooter’s name, but pushing back on rumors that he was an APD insider, saying he “was not involved with law enforcement in any way.”

As we reported, Perry’s version of events is contested not only by witnesses but also bystander video that many believe shows, at a minimum, that Perry’s driving into the crowd was not entirely inadvertent. This has compounded the community’s angry incredulity at APD’s opting to promptly release Perry, claiming it “lacked probable cause” for an arrest – a decision state Sen.-elect Sarah Eckhardt termed “an epic failure of leadership.” (A potential “stand your ground” defense for Perry would need to be advanced in court; it does not give police the power to unilaterally decide Perry has not committed a crime.)

When the Chronicle went to press on Wednesday, Perry’s name was already being widely shared among news media and citizen investigators, based on witness photos and intercepted APD dispatch calls citing the license plate NFN9573 – a 2020 black Hyundai registered to Perry. The “revolutionary news site” Tribune of the People – which openly supports* MRB – cited eyewitness confirmation that Perry was the driver they saw shoot Foster and published its story late Thursday night.

That story naturally depicts Perry as much less of an Eagle Scout as do his attorneys, although the evidence it presents – social media posts, long-ago misdemeanors – is not very conclusive of its assertion that Perry is a reactionary ideologue who deliberately targeted MRB. That said, the ofrenda assembled at the July 26 vigil in Foster’s memory was later vandalized (with white paint; it has since been reassembled); a man who resembles Perry, as shown in a photo published by Tribune of the People, was said to be harrassing mourners there around the same time, earlier this week.

*This post has been updated since publication to correct Perry’s first name; the Chronicle regrets the error. Also, we have clarified Tribune of the People’s relationship with the Mike Ramos Brigade, at the news site’s request.