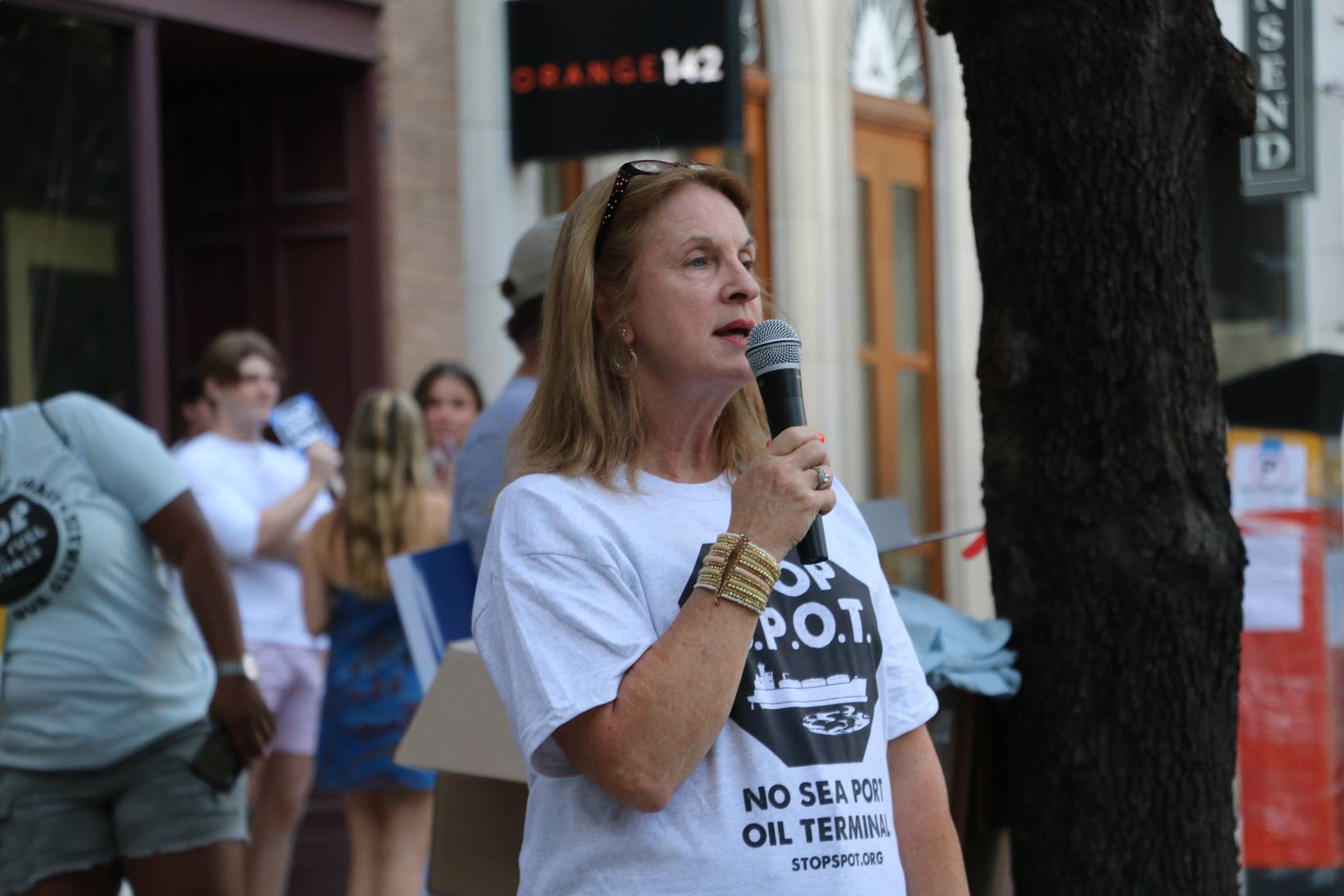 Near the end of the Texas Tribune Festival’s opening-night keynote with U.S. Secretary of Transportation Pete Buttigieg, a murmur rolled through the Paramount Theatre and heads craned to house left. From the balcony, a bright yellow banner unfurled that read “Please Pete, Stop S.P.O.T. No Fossil Fuel Exports.”

Someone yelled “Secretary Pete!,” the murmur rose, phone cameras snapped, and Buttigieg went on speaking. But during the audience Q&A section that followed, he shouted the protesters out approvingly as “calling attention to a problem… as these folks have done here tonight exercising their First Amendment rights.”

That “problem” is the Sea Port Oil Terminal (SPOT), an export terminal proposed for the Gulf Coast outside Houston. Residents of Harris and Brazoria counties, which include some of the most polluted communities in the nation, have provided 50,000 comments along with the backing of 30 environmental advocacy groups, including Earthworks and Citizens for Clean Air and Water, urging the U.S. Maritime Administration, part of Buttigieg’s department, to reject the terminal application, which is set to be decided this November.

A proposed pipeline would transport 2 million barrels of domestic crude oil per day for global export via Very Large Crude Carriers (VLCCs) from Houston to Surfside Beach, Melanie Oldham’s town. She says, “We’re one of those sacrifice communities everybody keeps talking about. We have all kinds of health problems, cancer clusters in Brazoria County where we’re from. We have high rates of respiratory heart problems, and we’re overburdened already. We’re surrounded by Dow Chemical, BASF … Freeport LNG [liquefied natural gas terminal] is five minutes from where I live.”

SPOT is just one of six pending applications for new pipelines on the Gulf Coast. “We have so many pipelines,” Oldham said, “and people like my congressman Randy Weber say, ‘Well, what’s one more pipeline for you guys? What’s one more tank? We’re in severe non-attainment [of federal air quality standards] for ozone; it can’t get any worse.’”

During the Q&A portion of his keynote one-on-one with Texas Tribune CEO Evan Smith, Buttigieg responded to a question on SPOT: “Under public comment [as part of the project’s environmental review],, we received thousands of comments on that. Now we’re in a stage where I can’t comment much because of where it sits in the legal process. But what I will say is that we’re going to take all that input very seriously. And that any outcome is going to be one that upholds the law and is responsive to things that are requirements [of DOT] as a department.” Texas Campaign for the Environment tweeted that it’s still waiting on a firm answer:

We got @SecretaryPete’s attention tonight, but we’re still waiting on a firm answer! Will he stop SPOT? #StopSPOT https://t.co/guFDAuU7dg

Buttigieg was also a keynote speaker at South by Southwest earlier this year, when the Infrastructure Investment and Jobs Act (the “bipartisan infrastructure bill”) was still fresh and top-of-mind; as Smith dryly noted, it’s been “infrastructure week” for nearly a year now. So they talked about other stuff, too: What’s it like being the only queer member of the Cabinet? How does it feel to be told your marriage is invalid? How’s Joe Biden doing? Remember when you trounced him in the Iowa caucus? That was wild! And so on. (The questions submitted by the audience, on the other hand, were all about his day job, not just SPOT but also the controversial Texas Dept. of Transportation rebuilds of I-35 in Austin and I-45 in Houston; the latter project got put on hold by Buttigieg’s department over concerns its review process ignored and/or violated impacted communities’ civil rights.)

Buttigieg fielded the more personal questions with aplomb, if haltingly – one can tell that he has become used to being on display, his every move watched and commented on, for a while, and it’s not his favorite part of the job – and noted that he couldn’t imagine a circumstance where he would feel fit to weigh in on the validity of Ted Cruz’s marriage, so he just doesn’t get why the reverse isn’t true. Do you?