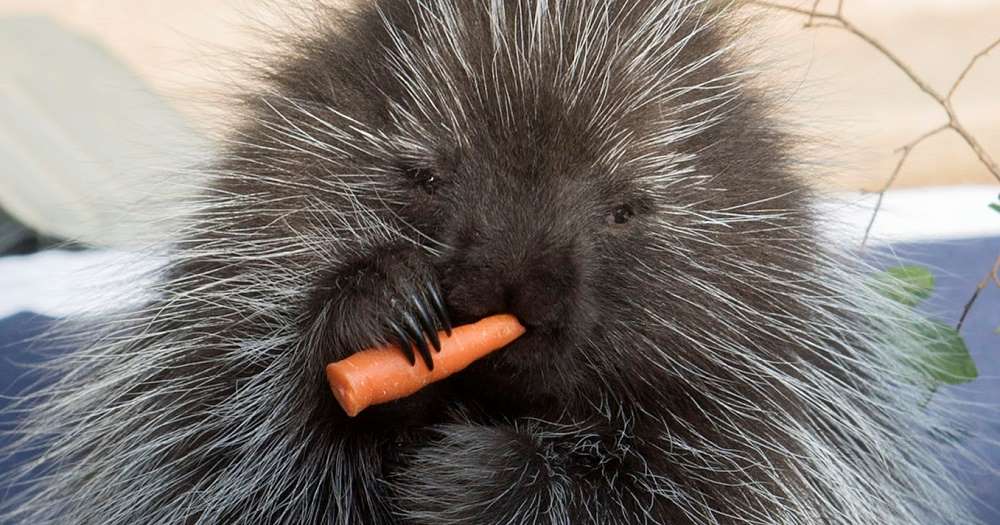 Meet the neighbors: one of the two baby porcupines recently added to the collection at the Austin Nature & Science Center. (Photo by John Anderson)

There’s a snuffling, and chewing. The newest resident at the Austin Nature & Science Center, a four-month-old male porcupine, is gnawing on on some treats: fresh fruit, veggies, and especially his favorite, sweet potatoes.

The young porcupine is one of a pair that are becoming permanent residents of the Austin Nature & Science Center, and Austinites will get to meet them both as part of this year’s Austin Museum Day, taking place September 18. The center is hoping that visitors will be so inspired by the experience that they may help with an important challenge: giving the duo names (suggestions being taken now via the Friends of ANSC Instagram account).

The porcupines are just the first of several new residents at the Center. Coming soon are two baby reptiles, and a secret surprise addition that City of Austin Recreation Supervisor Jessica called “really cool and really unique,” and, like all over the over 100 animals that are either on display or part of the center’s educational program, native to Central Texas.

The additions are part of a larger ongoing rehab of facility, including the outside enclosures for larger animals, and the interior of the Small Wonders display. Gilzow explained that “a lot of the animals have lived here for many, many years, and some of the birds have been here since almost the beginning. As time marches on, it’s time to start rethinking about those exhibits.”

There were considerations about new residents: after all, there are only three staff dedicated to animal welfare, and they have to look after all the animals, from spiders to bobcats, every day of the year, in all circumstances. “Even during Snowpocalypse Uri,” Gilzow said, “we had animal keepers that slept here to look after the animals.”

However, the animals must also be local to Central Texas, and that can be part of the center’s essential educational programming. “So when we were thinking about a rodent, and thinking about a herbivore, a porcupine was one of the things that we had had before in our collection and that people don’t get to see, and that live in Central Texas.”

The educational component is central. After all, this is not a zoo: nor is it a refuge, although most of the larger animals were either injured when they came to the center, or were former pets that were imprinted on humans: in either case, they would not be able to return to the wild. The porcupines are a little different, as they actually came from a licensed breeder.

The center hopes that people can learn a lot about their nocturnal neighbor – not least that they are found in Central Texas, although they are rarely spotted because they are nocturnal. There’s even been signs of wild porcupines in Zilker Park, so it’s not impossible the duo may get visitors. Many other residents of the center do, with wild Roadrunners often circling the Roadrunner enclosure, and ravens cawing to Pogo, their cousin who is part of the collection. Gilzow said, “People forget very quickly when they live in an urban environment that that once was habitat for animals. We build things, and these animals have smaller bits of land to live on, and that’s when they have interactions. That’s why we’re here, to let people know that there’s this diversity of wildlife living in their back yards, living in the parks, and that we should be thoughtful about how we provide habitat for them.”

With the porcupines, another part of the education will be debunking the myth about them shooting quills. “We want people to see that they’re not vicious,” Gilzow said. “They’re herbivores, they’re great.”

Want to see more of our prickly neighbors, and their friends at the Austin Nature & Science Center? Check out our gallery here.