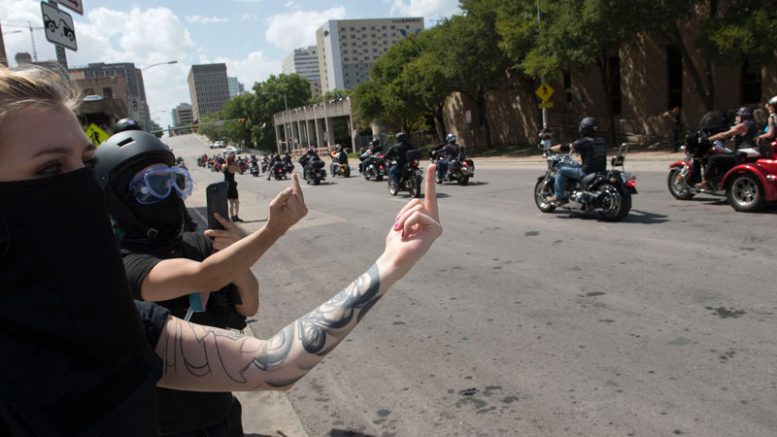 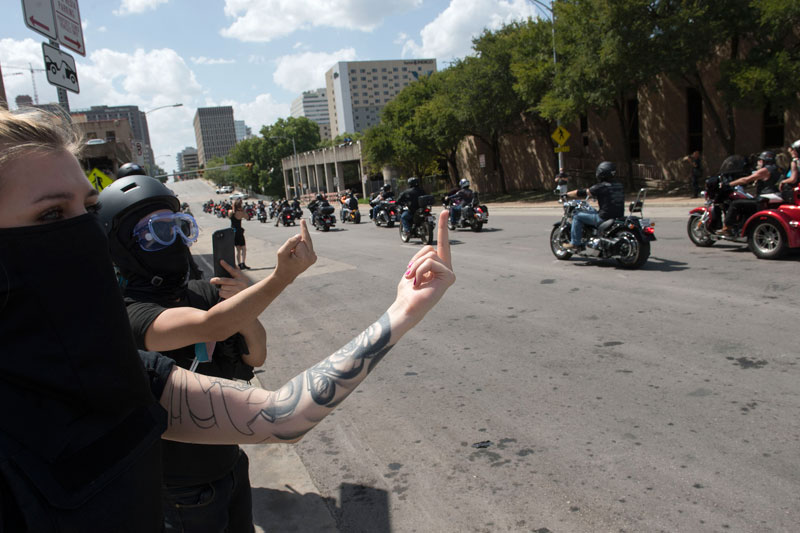 Counter-protesters give a pointed welcome to “Silent No More” bikers. (Photo by John Anderson)

To show its support for law enforcement, a local motorcycle club staged a “pro-police” demonstration Downtown on Sunday afternoon, August 9, drawing a contentious face-off with counter-protesters.

By the end of the event, Austin Police Department officers had arrested 18 people, on charges that ranged from resisting or interfering with arrest to “city ordinance violations.” The latter, according to protesters, included such things as jaywalking, riding bikes on the sidewalk, and amplified sound without a permit. Not all of those arrested were protesters; they included a photographer and two others whom police could not confirm were part of the events.

The Wind Therapy Freedom Riders, or WTFrs, spent the weekend visiting police officers in Leander and Buda, among others as part of their event, “Silent No More – We Back Our Protectors.” After arriving in formation amid heckling counter-protesters in front of Austin police headquarters at I-35 and Eighth Street, about 50 motorcycles parked along Seventh St. in spaces reserved for APD vehicles. As APD officers arrested a protester for apparently jaywalking, bikers greeted other officers with handshakes and fist-bumps while cheering on the arrest. Joining the group was Christopher Ritchie, a participant in the 2017 Unite the Right Rally in Charlottesville.

Meanwhile, about half a block away, counter-protesters who, throughout the afternoon, stayed on the sidewalk as a group were warned over an APD loudspeaker that they were “violating state law.” Shouts of “we’re on the fucking sidewalk” were met with the declaration the counter-protesters were engaged in an unlawful assembly. Bike cops briefly lined up next to the sidewalk, and a few minutes later the opposing groups met face to face, with counter-protesters largely masked up for COVID-19 and the bikers not so much. While the two groups chanted, yelled and jeered at each other for approximately 30 minutes, officers charged at and snatched counter-protesters, at one point being cheered on with the chorus of “Na Na Hey Hey Kiss Him Goodbye”.

Sunday’s arrests followed the arrests of four Black Lives Matter protesters the night before. After police warned marchers over a loudspeaker to get out of the street, the group of about 20 protesters complied. They gathered on the sidewalk next to the ofrenda memorial for protester Garrett Foster, who was killed two weeks prior. Within minutes, officers charged the crowd for arrests, at one point pushing protesters into the memorial and damaging it. One protester claimed his shin was cut after being shoved by police and landing in broken glass from the candles.

The Saturday night arrests included street medic Justin Daisy, who was charged with obstruction of a highway and unlawfully carrying a weapon. According to Daisy, he was holding a bike in a lane blocked off from cars on Congress Ave when police grabbed him without warning. Daisy, who has an concealed-carry license for his gun, described the situation as, “It’s all bullshit.”