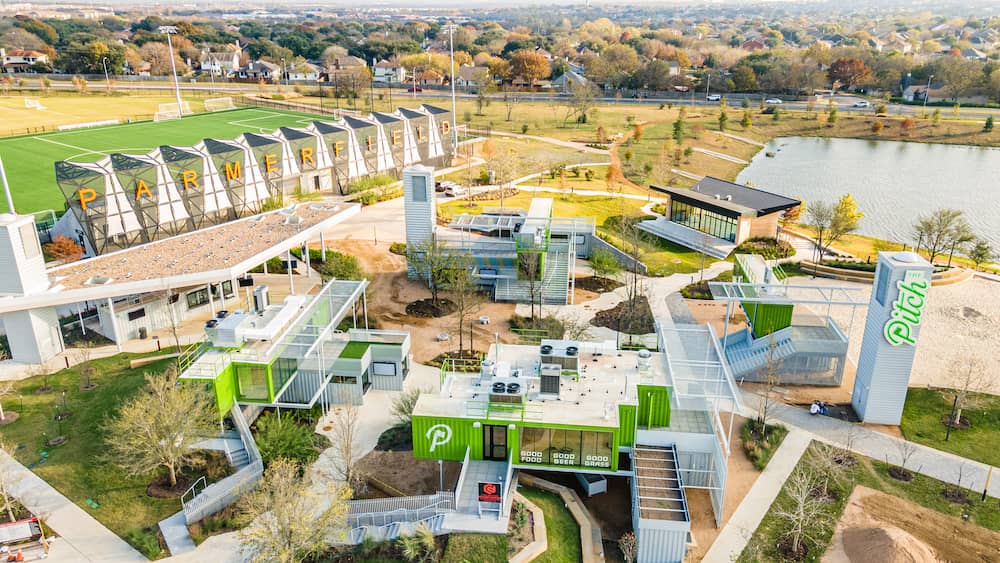 Taking a page out of the playbook of the Dallas Cowboys who, in 2016, opened a mega hospitality and entertainment district at the team’s practice facility in Frisco, Austin FC will soon run its training sessions beside a multipurpose food and fun venue called The Pitch.

Set to open in February when Austin FC starts its preseason campaign, The Pitch is a dining and outdoor events center located beside the club’s St. David’s Performance Center off Parmer Lane in North Austin. The project was developed in collaboration between Austin FC’s ownership group and Karlin Real Estate, and is part of the larger Parmer Austin development, which features multiple large office buildings across the street from the soccer complex.

Clearly designed with those office building tenants in mind, The Pitch profiles as a happy hour utopia. It features four restaurants: Ranger Burger, a burger bar; Ga Roti, a Vietnamese rotisserie chicken counter; Taco Flats, a taco spot; and Sand Bar, a beach bar and grille complete with a sand volleyball court, as well as coffee and bakeshop Coffee Club and Corner Kick, a craft beer and cocktail bar. Each is constructed out of multi-level, customized shipping containers painted bright Verde.

In addition to dining, the complex will feature jumbo television screens, an events center, and a five-acre nearby pond with jogging trails.

“The vision behind The Pitch at the Parmer Pond District is to be a first-of-its-kind sports, dining and entertainment destination,” project lead Dave Greeley said in a press release. “This will be an unmatched experience for Parmer Austin tenants, Austin FC and club supporters, and the community.”

The Pitch is located more than five miles northeast of Q2 Stadium, putting it a bit out of the way for Austin FC fans looking for a pregame tailgate spot for MLS matches. However, connected to the facility is a 1,200-seat stadium and artificial turf field that will host matches featuring Austin FC’s academy teams. It is also easy to imagine Austin staging preseason matches there in the future, though the two scrimmages taking place at St. David’s Performance Center this preseason are closed to the public.