The answer is, of course, no.

We mean, don’t be stupid. 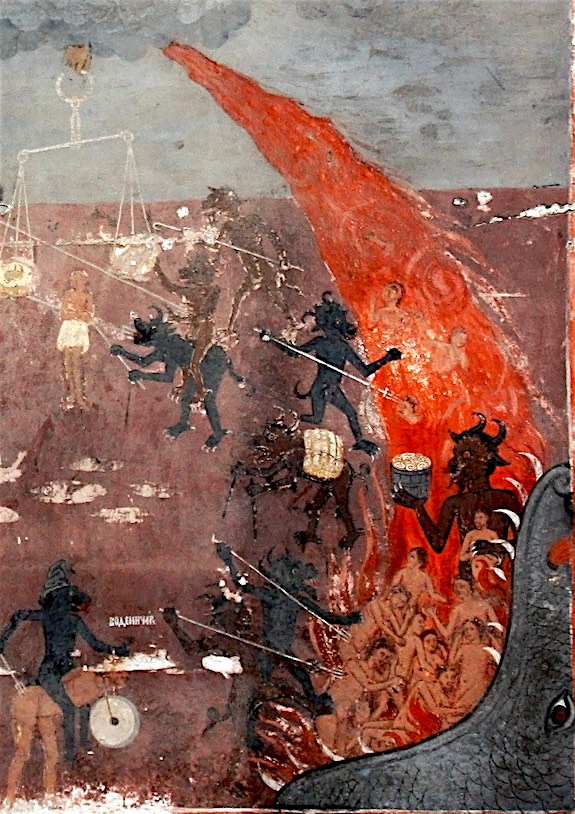 The heat is, as they say, on.
(Detail from a fresco in the medieval church of St Nicholas in Raduil, Bulgaria)

But if we’re talking about Hell, Michigan, for instance, then Austin is actually hotter than Hell today: That unincorporated community near the bottom of the Lake Huron-pinching Mitten probably won’t surpass 80° before the night closes in.

That’s also true for the Hell that’s in the Cayman Islands.

And even Hell, California, might not be as hot as Austin’s predicted pinnacle of heat on this 23rd day of July.

And Norway’s Hell isn’t even in the running.

But, okay, what about the abstract concept, right? What about Christian Hell, that hell with the accompanying mythos that’s at least passingly familiar to so many people in the U. S. of A?

Science, placing its grubby mitts all over the body of faith, estimates that Hell (if it’s really underground, after all; if it’s wayyyyyyyy down deep in the center of the planet) must be somewhere between 9,000 and 11,000 degrees Fahrenheit. Which temperature the gravel-strewn parking lot behind the Chronicle offices has yet to reach this day – and we assume that the same holds true for the rest of our fair city.

(Note: Yes, we’ve been using Fahrenheit all along.)

And if we leave reality to the realists and religion to the religionists, we find that – according to this clever little thesis from the 1920s – the temperature of Hell is between 240° and 832°.

(Which also makes it, according to the same Bible-based reckoning, cooler than Heaven.)

So, again, citizen, the answer is: No, Austin is not as hot as Hell right now.