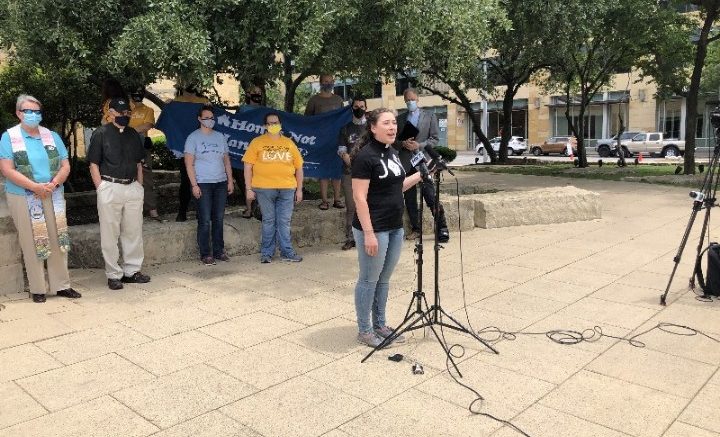 More than 70 Austin faith leaders have ramped up their opposition to Proposition B on the May 1 ballot, which seeks to reverse city policies on homelessness, including partially reinstating a ban on public camping.

In a letter last Friday, April 23, and a socially distanced press conference on Monday, the group, which only formed last week, presented a diverse range of voices representing a number of Christian, Muslim, and Jewish congregations.“Prop B does not provide any housing or services, and does nothing to address the underlying issues that drive homelessness in our community including soaring housing prices, inequality, and mental health issues,” the letter reads.

The leaders assembled at City Hall on Monday to express their concerns, after which several members of the group filed inside to cast their ballots. The groups said the camping ban represents a civil rights issue that shouldn’t be determined by partisan lines. “Nothing is going to help the homeless community beyond a more concerted effort between those on progressive and conservative sides,” said Rev. Abigail Parker Herrera, associate pastor at Tarrytown United Methodist Church. “It’s going to take all of us to care about people.” Chris Harris from Homes not Handcuffs, the coalition organized to oppose Prop B, said the faith leaders’ stance underscores the ethical question facing voters. “It helps people to understand, if not the practical side of what will solve this, the sort of moral imperative that exists to treat everyone how we would want to be treated, should we find ourselves in that situation,” Harris said.

Prop B’s opponents, whose activism in 2019 pushed City Council to decriminalize aspects of homelessness, have stressed that encampments are not supposed to be long-term housing solutions, but are a more humane practice than forcing Austin’s unsheltered poor to run from the law and hide in the shadows. Advocates say that re-criminalizing camping, sitting or lying on sidewalks, and panhandling would force many unhoused Austinites into a cycle of chronic homelessness and break the connections some have already made with supportive services. Run-ins with law enforcement create a burdensome criminal record and can lead to institutionalization for people with disabilities or mental illness.

Advocates also noted that COVID-19 safety protocols have impacted how law enforcement engages with residents in encampments, which have become larger and more visible over the last year, in part, because federal guidelines recommend against removing them during the pandemic. “Clearing encampments can cause people to disperse throughout the community and break connections with service providers. This increases the potential for infectious disease spread,” reads the statement from the U.S. Centers for Disease Controil and Prevention.

Both sides acknowledge that the city must do more to provide housing; opponents of Prop B expressed hope that the discussion will catalyze change. Chris Davis, a spokesperson for Austin’s Ending Community Homelessness Coalition (ECHO), said that more short and long-term supportive housing is key, as the city’s shelter capacity has been at more than 90% throughout 2020 and into this year. “The solution to homelessness is a safe and stable home,” Davis said.

Homes not Handcuffs is concerned about the uphill funding battle that it faces. “I’ll reference the elephant in the room, they’re an extremely well-funded operation,” Harris said. “Way more funded as it relates to this effort than the folks that are pushing against it.”

Save Austin Now, the group supporting the measure, had raised around $430,000 when the last campaign finance reports (30 days prior to the election) were filed at the beginning of the month, compared to around $20,000 for Homes not Handcuffs, which had just organized as a political action committee. (Save Austin Now has been in existence as a PAC, and fundraising, since it first kicked off its petition drive to place Prop B on the ballot, more than a year ago.) In the latest finance reports (8 days prior), both sides show financial support from prominent Texas politicians. Homes not Handcuffs received donations of $1,000 and $500, respectively, from 2020 Democratic congressional candidates Mike Siegel and Julie Oliver, both of whom have also organized volunteers to campaign against Prop B, as well as contributions of $10,000 from ECHO and $5,000 from the Austin Justice Coalition.

Meanwhile, Gov. Greg Abbott’s campaign, which has something like $50 million in the bank, invested around $44,000 in advertising to support Prop B – almost as much as Homes not Handcuffs reported raising for its whole campaign. “Voting YES on Prop B will ensure greater health & safety for everybody in the entire Austin area,” Abbott tweeted after casting his vote last week.

Save Austin Now’s fundraising has dramatically outpaced anyone else working for or against items on the May 1 ballot; it reported $820,000 raised in its latest filing (so, just in the last few weeks), with a slew of donations below $1,000. However, there are big-dollar donors in SAN’s corner for this contest, which is not constrained by the campaign finance limits that apply to City Council elections. Some large contributions came from TelcoDR founder Danielle Royston ($98,000), Palantir founder Joe Lonsdale ($40,000), and TRT Holdings, the company owned by Dallas billionaire Robert Rowling ($50,000).

However, Save Austin Now has also spent much of that money, reporting only $122,000 in cash on hand. Most of that has gone towards advertising, as Austinites have probably noticed; as was the case in its last report, a six-figure sum (nearly $337,000 this time) has gone to Victory Solutions (identified in the report as WAB Holdings LLC), the Ohio-based consultancy run by former Trump campaign and White House aide Shannon Burns.

On this report, more than half of Victory’s haul is identified as “solicitation/fundraising expense” rather than advertising; it’s common, especially in Republican-allied campaigns, for consultants pumping small-dollar donors via email and digital media to take a hefty commission of the proceeds. Save Austin Now co-founder Matt Mackowiak, also the chair of the Travis County Republican Party, crowed in a press release earlier in the month that, “No one has ever run as sophisticated a campaign as the one we are running.”