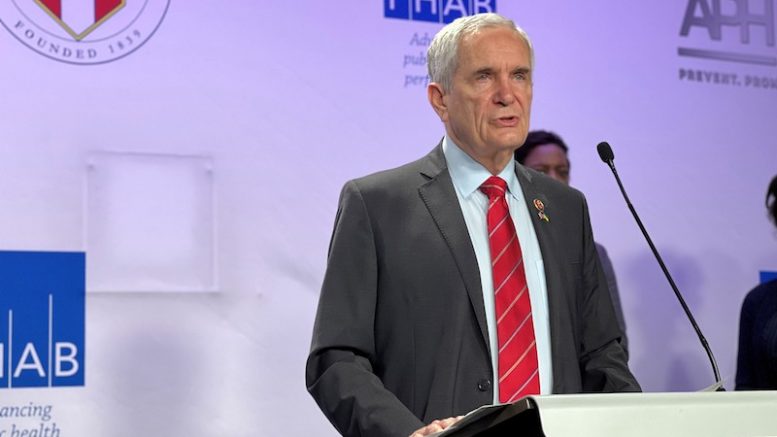 This funding will augment the combined $2.5 million the city and county have already invested in opioid response; it will flow first through existing partnerships between the city and county and on-the-ground groups like Texas Harm Reduction Alliance and Communities for Recovery. “We don’t have a panacea but hopefully we have some progress,” Doggett said.

In addition, Austin Public Health will use federal funds to hire a full-time peer recovery coaching team, the first in its history, and a street outreach team; create safe disposal programs for prescribed drugs; and train first responders to administer naloxone (brand name Narcan), an overdose-reversing drug that Travis County Judge Andy Brown carries in his backpack – “and I encourage everybody to try to do the same.” But, as Mayor Kirk Watson noted, naloxone “is in high demand and short supply. We [also] have to have preventive measures.”

Prevention will focus on education and public information campaigns: Health Authority Dr. Desmar Walkes noted that overdoses occur in every demographic and all over the city, including in the home, necessitating education about the risks of opioid addiction through health care providers as well as street outreach. Federal money will also go toward health care providers and preventing cycles of dependency. “Some of this results, of course, from over-reliance in pain reduction on opioids,” said Doggett, acknowledging the need to keep “looking for non-opioid pain management options.”

Despite Brown’s partnership with THRA to address the opioid overdose crisis over the last year, a preliminary medical examiner’s report shows 199 accidental overdose deaths in the first six months of 2022, 118 of them fentanyl-related – a number comparable to the entire death toll in 2021. At Tuesday’s presser, Brown noted that the numbers of women, Black residents, and Hispanic residents who died were up 150%, 180%, and 155% respectively. “These numbers are troubling and it’s very likely that they’ll get worse when we see the next report,” said Brown. “Overall overdoses will dwarf the 2021 total.”

Brown and Doggett went on to urge the 88th Texas Legislature to legalize fentanyl testing strips and expand Good Samaritan laws, and also to direct some of the state’s unprecedented $33 billion budget surplus to help ease the financial burden the crisis is imposing on local government. “This is a team effort – this session is going to decide the fate of millions and millions of dollars that frankly could be used to help end the need for Narcan in this community by fully funding it for us,” said Brown. “A drug addiction or recreational drug use should not be a death sentence.”