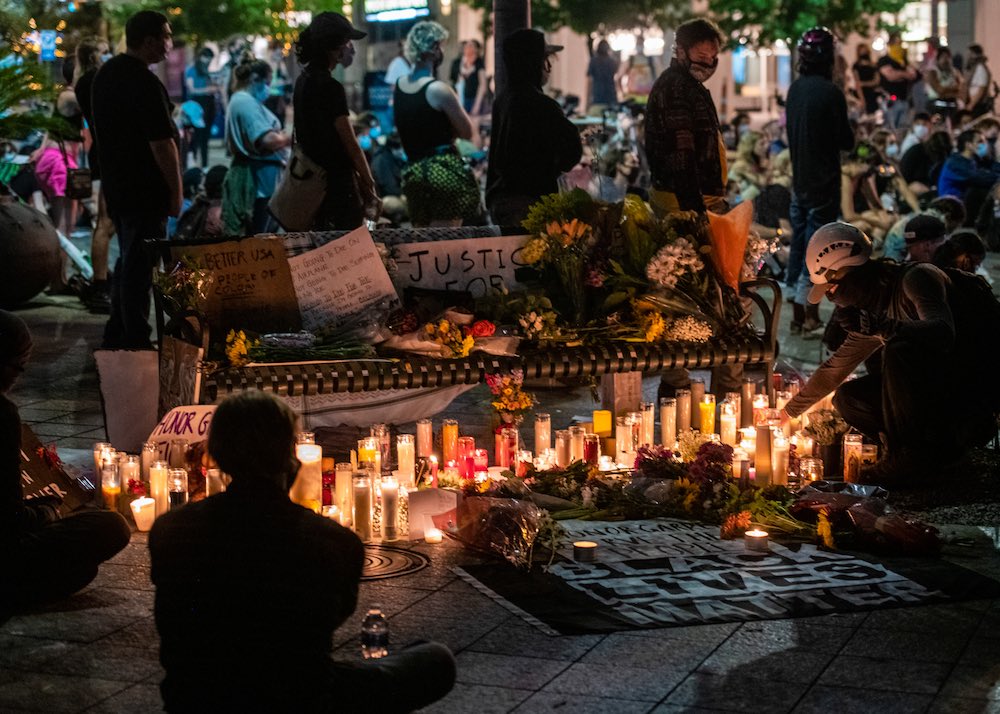 On July 26, 2020, several hundred Austinites reconvened at the site of Garrett Foster’s shooting death the day before for a vigil and march to City Hall (photo by David Brendan Hall)

On July 1, Travis County District Attorney José Garza announced that a grand jury has indicted Perry for murder, aggravated assault with a deadly weapon, and deadly conduct. The active-duty sergeant surrendered to Travis County authorities that afternoon, was booked into jail, and released on a $300,000 bond.

BLM supporters have been waiting for the indictment since the evening of July 25, 2020, when Perry, stationed at Fort Hood but driving for a ride-hailing company in Austin, encountered 100 protesters marching north on Congress Avenue at Fourth Street shortly before 11pm. Multiple videos of the event show Perry honking his horn and pulling his vehicle aggressively into a group of the marchers. He stopped in front of Garrett Foster, an Air Force veteran who routinely carried an AK-47 at the marches, and his fiancée Whitney Mitchell, a quadruple amputee whose wheelchair Foster pushed through the streets in protest after protest that summer. Witnesses said that as Foster approached Perry’s car, the sergeant shot through the open driver’s side * window, hitting Foster three times in the chest. He died with Mitchell screaming by his side.

Perry fled and turned himself in to Austin police, telling them that he’d shot in self-defense after Foster raised the barrel of his AK, something that protesters on the scene swore was not true. APD released him several hours later on his own recognizance.

Perry continues to claim that he shot Foster in self-defense. However, he refused to testify before the grand jury. His lawyer, Clint Broden, told reporters that Garza did not allow him to submit written testimony to the grand jury, saying, “We understand the political motivations of the District Attorney” – but not specifying what, exactly, those are.

Garza refuted Borden’s assertions – and insinuation – at a press conference announcing the indictments. “Both of those accusations are simply false,” the D.A. said. “Mr. Perry’s attorney presented our office with a packet of information and the overwhelming majority of that information was, in fact, presented to the grand jury for their consideration.” Garza did not characterize the contents of Borden’s packet – that is against the law – but said the only material from the packet that was withheld was information that would not have been permitted in a trial.

Garza stated that it took his office three weeks to present all of the evidence it had collected. “[The] evidence presented by our Homicide and Major Crimes Unit included over a 150 exhibits and testimony from 22 witnesses,” he said. “In addition to the investigation that law enforcement conducted, the District Attorney’s Office also reviewed evidence and interviewed witnesses in order to present the most accurate possible set of facts to the grand jury.” Garza’s reference to 22 witnesses strongly suggests that a significant number of those present at the shooting have appeared before the grand jury, and will likely testify in the coming trial. Also, Perry’s indictment for deadly conduct – a misdemeanor that relates to how he drove his car into the group of protesters – demonstrates that the grand jury judged this to be an act of aggression.

Garza couldn’t say when Perry’s trial will begin, as the system is still suffering from a backlog of cases due to the COVID-19 pandemic. He did say that his office will be asking a judge to authorize the confiscation of any guns that Perry may own in order for him to remain free on bond. He said they may ask for the imposition of other conditions as well.

Foster’s partner, Whitney Mitchell, was devastated by his killing. He was her sole caretaker and they had been looking forward to getting married. Mitchell’s attorney, Angelica Cogliano, released a brief statement after the indictments were announced: “We are grateful for the hard work of the District Attorney’s Office in prosecuting the senseless killing of Garrett, who was a loving, supportive partner to Whitney. This is the first step in a long process that we hope and trust will yield a just result.” Cogliano said that Mitchell may release her own statement next week.

Editor’s note: This story has been updated since publication to clarify the description of the shooting.