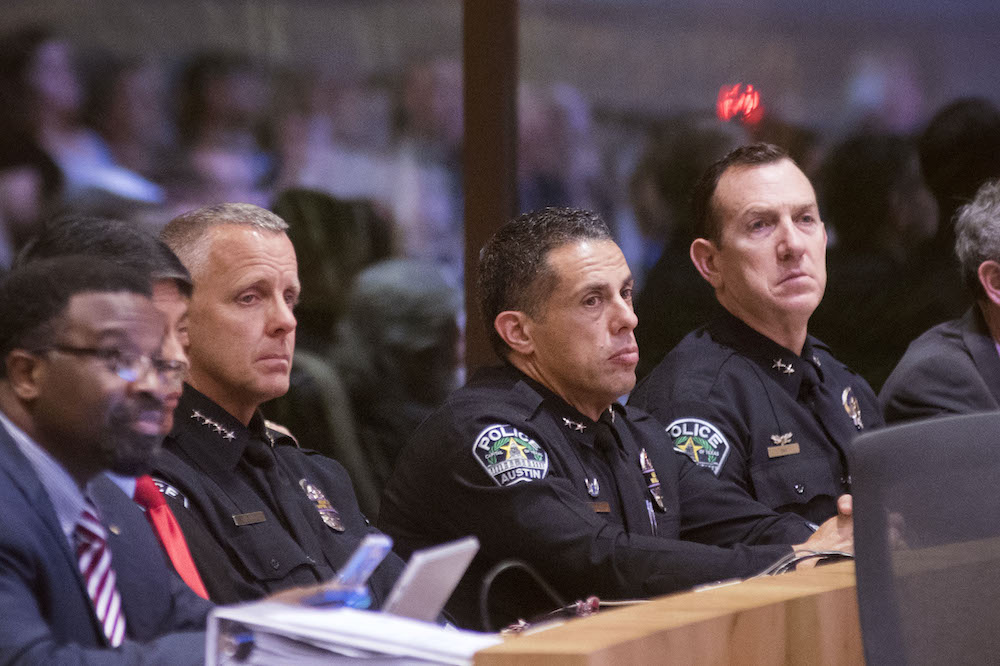 Assistant Chief Joe Chacon has gotten the nod from City Manager Spencer Cronk to serve as the interim leader of the Austin Police Department while the city undergoes a search for its next chief of police.

Chacon’s appointment as interim chief requires City Council confirmation, per state law; that vote is set for this week’s Council meeting Thursday, March 25. Last week, the Chronicle reported on conversations inside City Hall that APD Chief of Staff Troy Gay – the current APD No. 2 under Chief Brian Manley, who retires March 28 – was favored for the interim role, despite opposition from both inside and outside the department.

Although Chacon has a better reputation than Gay among justice advocates who have been influential in the last year’s drive to “reimagine public safety,” they had urged Cronk to look outside APD entirely. “I had an incredibly difficult choice [of] interim candidates,” Cronk told reporters Monday morning, alluding to his consideration of current, former, and non-APD leaders for the role. “It was important that I found a balance, and I believe that Chief Chacon provides that balance.”

Cronk cited the importance of having an interim chief “well versed in the ins-and-outs of our current practices,” but also pointed to “individuals with new perspectives and values” that will serve as advisors to Chacon. Those include Deputy City Manager Nuria Rivera-Vandermyde (overall lead of the “reimagining” effort), Assistant City Manager Rey Arellano (whose public-safety portfolio includes APD), and former Deputy City Manager Michael McDonald, also Austin’s first Black assistant chief, now a consultant.

The Reimagining Public Safety Leadership Team is working now on measures that could be implemented before a permanent chief is selected. As such, Cronk said he does not want Chacon to be a “placeholder” until then. “I asked [Chacon] to be an active participant who would not only take the work that our team has been moving forward with,” Cronk said, “but to lean into that, and make sure that we are acting on the recommendations and not losing any of the momentum that we have built.”

Chacon joined APD in 1998 and currently serves as the department’s Central Bureau chief, where he oversees the Downtown Area Command, Parks and Lakes, Special Operations, and Special Events. Before that, he was Director of the Austin Regional Intelligence Center, a “fusion center” which enlists police officers and civilians as informants and whose past scrutiny of policing critics has been controversial, as the Chronicle has reported. Earlier this year, Chacon unsuccessfully sought the Chief of Police job in Waco.

Cronk also outlined the “comprehensive and inclusive” three-phase process for identifying, vetting, and approving the permanent chief, with the goal of a Council confirmation in August. Executive recruiters Ralph Andersen & Associates have been brought in to help the city find candidates; the firm has helped 35 cities in past police chief searches, as well as helping fill top slots at City Hall (including Arellano and Rivera-Vandermyde).

Through March and April, the city will develop a candidate profile identifying qualities and skills the next Austin police chief will need to succeed, as well as challenges they may face once confirmed. Virtual meetings with community members and APD personnel will provide input for the profile. In May and June, a community survey will generate more feedback for city leaders and stakeholders to consider, after which Andersen will recruit prospects across the nation – and potentially beyond – and conduct preliminary research to short-list candidates.

In July and August, top candidates will be interviewed by panels of community members, city leaders, and APD employees. Finalists will then be invited to participate in more interviews and public town halls before the final vetting process leading to a nominee for Council confirmation. It’s an ambitious timeline that is faster than what many advocates had hoped; Cronk said he did not want the search process “to be delayed for one or two years.”

Chacon is viewed as one of the more reform-minded leaders at APD – which is not that high a bar to clear – and it would be a surprise were he not confirmed. Thursday’s agenda also includes Council consideration of a blueprint and timeline for reforming and reopening the Austin police academy this June, which is also sooner than justice advocates would like. That same day, criminal justice reform activists from across Texas will be in town as the George Floyd Act receives its first hearing at the Texas Legislature.

“If Council chooses to” confirm Chacon and approve the academy resolution “on the day that everybody is at the Capitol advocating on behalf of victims of police violence,” Kathy Mitchell with Just Liberty told us, “that does not send a good message to the community. If Council is going to accept the same old management at APD, they need to take a closer look at the how and when to reopen the academy. The content of the revised curriculum needs to be established cooperatively with the community.” We’ll have more reporting in this week’s print issue.