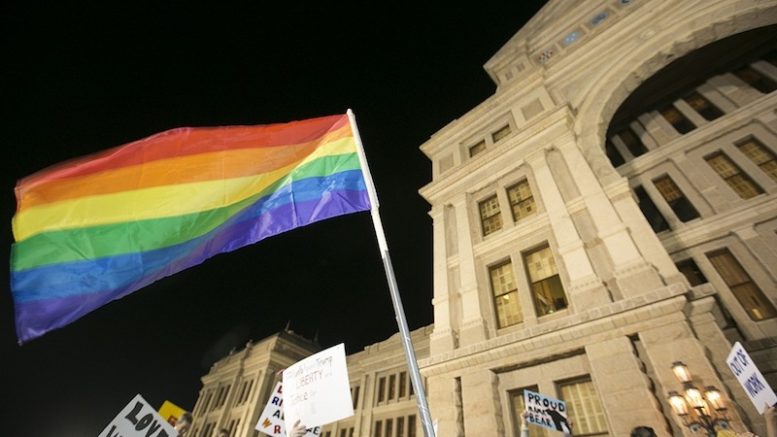 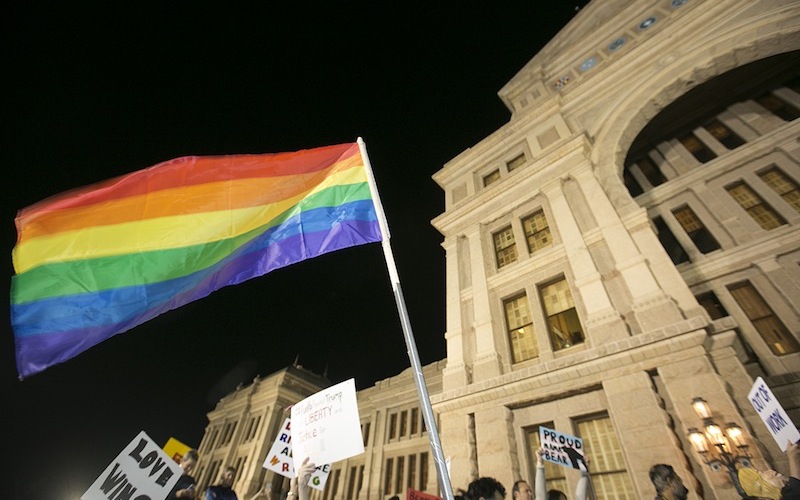 During previous state legislative sessions, LGBTQIA rights advocates rallied droves of supporters to protest outside of the Texas Capitol, with many also testifying before committees in the fight to protect queer and trans Texans. Who can forget that summer day during the 2017 special session where hundreds of people wound through the Capitol’s halls to testify against SB 3, the notorious “bathroom bill,” in a 10-hour marathon hearing?

For the 87th Texas Legislature, however, advocacy groups are getting creative in order to navigate COVID-19 restrictions at the Capitol while working to ensure that the voices of LGBTQIA Texans are still heard under Austin’s Pink Dome.

Although masks are no longer required at the Capitol in the wake of Gov. Greg Abbott’s rollback on Texas’ mask mandate, the Texas House and Senate have different rules (for now) – and exceptions – regarding masks and COVID-19 testing. For those seeking to testify virtually, virtual testimony is limited to invitation-only and decided upon by individual committees. Ricardo Martinez, CEO of the state’s largest LGBTQIA rights advocacy org Equality Texas, says this protocol excludes those who don’t want to take the risk of testifying in-person during the pandemic.

“For the most part, there is unlimited in-person testimony,” said Martinez, “which means if you’re willing to take the risk of going into the Capitol, it’s business as usual. But if you’re a person who does not want to take the risk, then there’s no direct method for you to give testimony virtually.”

That’s why several advocacy organizations are strongly encouraging their supporter bases to email and call their representatives this legislative session. Equality Texas is not only collecting written testimonies from people, which the org will then deliver before committee hearings, but EQTX has also started collecting video testimonies that people record at home called “Equality Hearings.”

“These bills are really just re-packaged bathroom bills,” said Martinez, describing the bills as just “the latest emergency issue that is really just an attack on the LGBTQ community.”

“We’re really focused on getting the same momentum that we would in a regular session, but we understand that people’s advocacy is limited.” – TENT Policy and Field Coordinator Andrea Segovia

This session isn’t all defense though. Advocates are pushing House Bill 3860, authored by state Rep. Jessica González (D-Dallas) and vice chair of the Texas House LGBTQ Caucus, which would expand nondiscrimination protections for queer and trans Texans in housing, employment, and public accommodations. Equality Texas has ramped up a series of online phone banks, skills training such as “How to Talk to Lawmakers,” and town halls with other groups such as Lambda Legal, Texas Freedom Network, and the Texas House LGBTQ Caucus to help people stay informed and engaged as such bills move through the Texas Lege.

And although the Trans Education Network of Texas is saddened to not hold its organizing events in person this year, the org hopes that its Virtual Trans Lobby Day will still offer the same sense of community as its in-person lobby days of yore. On Thursday, March 25, TENT’s virtual lobby day will be a place for trans folks from across the state to socialize with each other and meet with representatives to talk about the lives and rights of trans Texans.

“Our lobby day is literally one of the only days of the year that [some trans Texans in rural areas] see some of their good friends,” said TENT Policy and Field Coordinator Andrea Segovia. “That’s hard to replicate behind screens and not in person. How can we give our community the same feeling of being within community?”

Both EQTX and TENT, in addition to keeping their bases well-informed through social media, are prioritizing empathy above all this session, understanding that the same populations they serve – whose rights are under attack by right-wing lawmakers – are also surviving the ongoing pandemic and the lingering effects of last month’s devastating Winter Storm Uri. TENT is hyper aware of the way these disasters have disproportionately affected trans Texans: Out of the 70 folks that the org assisted with its Emergency Relief Fund after the winter storm, only three had secure housing.

“People are at their personal max right now going through a pandemic and dealing with trying to keep their jobs and keep their housing,” said Segovia. “We’re really focused on getting the same momentum that we would in a regular session, but we understand that people’s advocacy is limited.”

Click here to check out Equality Texas‘ online portal where you can submit written public testimony on specific bills. TENT holds its first-ever virtual Trans Lobby Day next Thursday, March 25, 10am. Register for the event here.