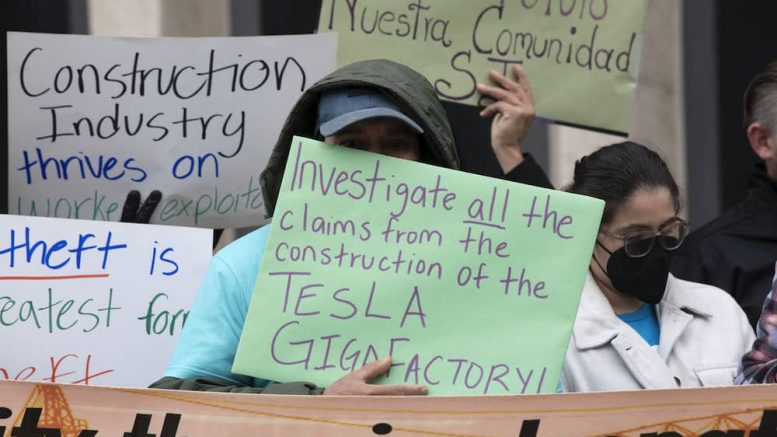 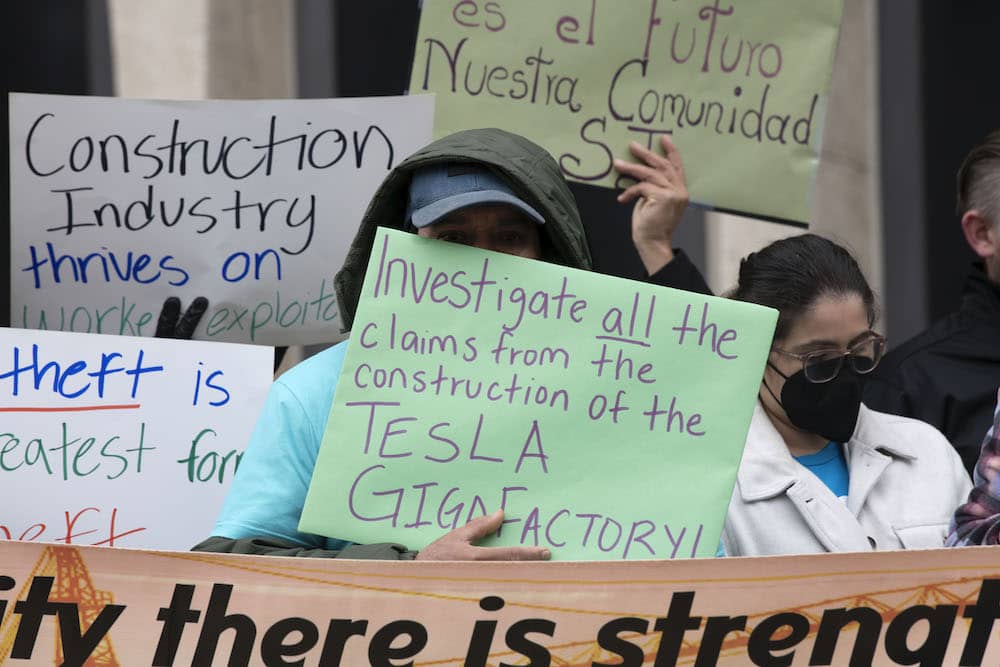 In 2020, the Travis County Commissioners Court approved $14 million in property tax rebates for Tesla in a successful effort to beat out Tulsa, OK for its new factory site. Some basic worker protections including a $15 minimum wage were in the deal, but the county did not commit Tesla to WDP’s Better Builder standards that many county and city projects use, because “[they were] being pressured by Tesla to act really quickly, they were basically threatening to go to Tulsa. They really rushed the process,” says David Chincanchan, policy director for WDP. “In Texas, the construction industry is really just a race to the bottom; it is one of the most dangerous places for construction workers in the nation.” Recent regional projects such as Q2 stadium, Project Connect, the ACC and AISD bonds have all committed to using Better Builder standards. Chincanchan says 34% of workers on Better Builder projects reported that they had received workers compensation for the very first time in their entire careers, and 40% said it was their first time receiving OSHA safety training. At Tesla, by contrast, “the kinds of things that [WDP] and the community warned would happen if we didn’t have strong commitments to worker protections are exactly the kinds of things we’re hearing about now.”

One protection Tesla did commit to was OSHA training certifications, a key part of Better Builder. It did not commit to third-party independent monitoring, and now Tesla appears to have falsified OSHA certificates according to one worker, Victor, who described unsafe working conditions in an interview to The Guardian, including laboring on a factory roof at night with no lights and on top of smoke-blowing turbines with no mask. The redacted OSHA referral describes the falsifying incident: “On or about May 14, 2021, [redacted], CEO of [redacted], sent him a fake, digital OSHA 10 certificate without providing any training. Victor had already received OSHA 10 training at another job. [Redacted] told him not to worry about it … that he should use this certificate instead of his legitimate OSHA 10 card. Victor showed [redacted], the safety director for [redacted], the fake, digital OSHA 10 certificate to begin working on the Tesla Gigafactory worksite.”

Unpaid holiday labor also spurred workers to come forward to WDP last spring. They were promised a double-pay bonus for working the weekend of Thanksgiving 2021: “Workers made the decision, instead of spending time with my family during the holidays, I’m gonna go ahead and get all that extra money, and then they didn’t get paid for it,” Hannah Alexander, lead attorney on the case, told the Chronicle. “I think that was really what agitated a lot of workers to take action, because unfortunately, so many [in the] construction industry experience [wage theft] that to some extent, it’s just part of the job.”

Alexander says WDP is referring the case to DOL and OSHA because “the different workers we’re in contact with don’t want to just recover their wages, they want to ensure that other co-workers also get the money they’re owed, that all workers are given what they’re owed.” WDP is also calling on Tesla to set standards for subcontractors, including independent monitoring “to ensure that all the contractors on the site and their subcontractors are doing right by the workers.” Chincanchan says “commitments to worker protections don’t mean anything unless there are really robust mechanisms for accountability and transparency, monitoring and compliance.”

In response to the filings, a spokesperson for Travis County said, “Worker safety in Travis County is of the utmost importance to the Travis County Commissioners Court. The Court is aware that a complaint against Tesla was filed … expects all parties to fully cooperate and will await the results of the investigation.” Tesla has not yet responded to the Chronicle’s request for comment.