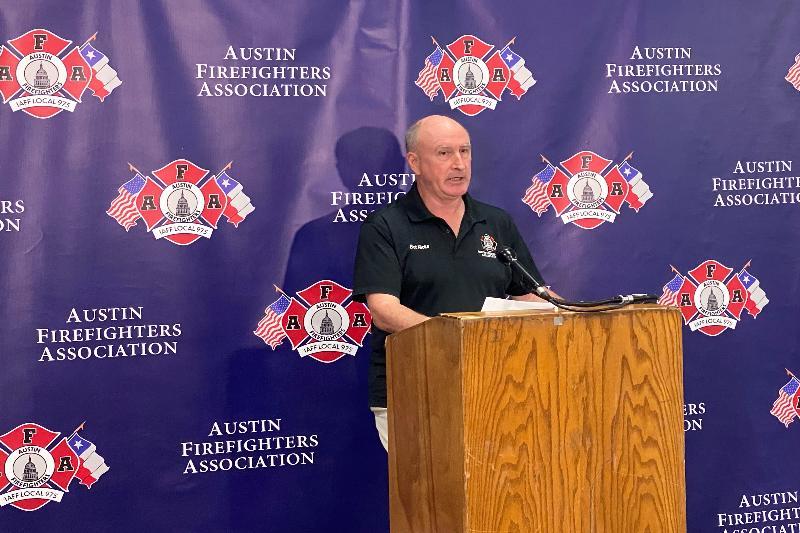 Members of the Austin Firefighters Association have voted to oppose Proposition A, the citizen initiative backed by Save Austin Now and the Austin Police Association that if approved by voters would require the city to hire around 500 new police officers.

The city’s budget office estimates that complying with Prop A’s mandate of 2.0 police officers per 1,000 Austinites and a minimum of 35% “uncommitted time” for those officers, along with other provisions, could cost up to $120 million in each of the next five years. At a press conference announcing the results of the vote, AFA President Bob Nicks stressed the outcome reflected the union’s problems with the proposed initiative, not with the police force.

“We consider Austin police Officers our brothers and sisters,” Nicks told reporters. “Firefighters are very disturbed by the disrespect shown to men and women of the police department of late, especially during the defunding exercises, and the protests,” he said, referring to City Council’s decision to cut about $20 million from the Austin Police Department budget in 2020 following that summer’s Black Lives Matter demonstrations.

However, Nicks added, Prop A is a “poorly written law that contains cost escalators,” like the “uncommitted time” requirement, which would likely push the cost of the measure well beyond what would be needed to maintain 2.0 staffing. Also, APD already faced difficulty filling its vacant officer positions even before protests broke out following the police killings of George Floyd and Michael Ramos in 2020; it may need to increase the starting salary for cadets and rookie officers to attract the recruits needed to get to 2.0 staffing.

Following a town hall on Sept. 20 which hundreds of firefighters attended virtually and in person to hear from opponents and supporters of Prop A, union members were asked if they wanted the AFA political action committee to spend no more than $15,000 to oppose the measure, or to remain neutral. About 600 of AFA’s 1,100 members took part in the vote, with 57% agreeing to oppose Prop A.

Nicks said the AFA PAC will produce videos and digital ads intended to convey the message that firefighters do not oppose a fully funded police department, but that Prop A is a “bad law that will actually hurt public safety overall,” because it could force budget cuts to Fire and Emergency Medical Services as well as other city services. Nicks added that AFA PAC would accept financial contributions from individuals and other organizations wanting to oppose the measure, so long as the AFA board deems that the contributors have been “respectful to police officers.” For Nicks, that means the various criminal justice advocacy groups that have formed the Equity PAC to oppose Prop A would be off limits.

“We hope to be a trusted source that can provide true and vetted information to the public on Prop A,” Nicks said, and “help people see through the lies and confusion” surrounding the ballot measure. The AFA boss took aim at Matt Mackowiak, the Travis County Republican Party chair who formed Save Austin Now, who he accused of “trying to pull firefighters away from the real issues by distracting them with personal attacks, lies, and confusion.”

Police union president Ken Casaday said the results of the vote were upsetting, because the APA remained neutral last May as the firefighters won voter approval of their own initiative (also Proposition A) to increase their power in collective bargaining with the city. With that power, AFA can push for firefighters to enjoy pay parity with police officers, which could also force other city departments to trim their budgets.

Casaday also noted that about 54% of AFA members voted in the poll to determine if AFA should oppose the measure, and among respondents, the result was close. “What that tells me is most members didn’t want anything to do with it,” Casaday told the Chronicle. “Maybe half the firefighters oppose Prop A, but 46% of his membership didn’t vote.”

Selena Xie, president of the Austin EMS Association, told us that despite the AFA vote her union has thus far decided to stay out of the Prop A campaign and will likely remain that way. “The board has not taken a position,” Xie said, “and I am not going to ask the board to ask our membership if they want to oppose the measure. I don’t anticipate any board member to do that either.”

Xie acknowledged she has concerns about the budgetary impact Prop A would have on EMS, which has also struggled to fill vacant positions and seen its medics working more overtime without financial incentives. “We are still working through what the actual ramifications to the budget will be between different estimates,” provided by the city, Xie said.

But, Xie added, the campaigns for and against Prop A have become so polarized that the merits of the policy have become obscured. “It’s become an emotional issue,” Xie told us. “Due to our short staffing and increased amount of overtime medics are working, it’s just not our top priority right now.”

As the Chronicle prepared to publish this story, SAN had not issued a statement in response to the AFA membership vote and did not respond to our requests for comment.