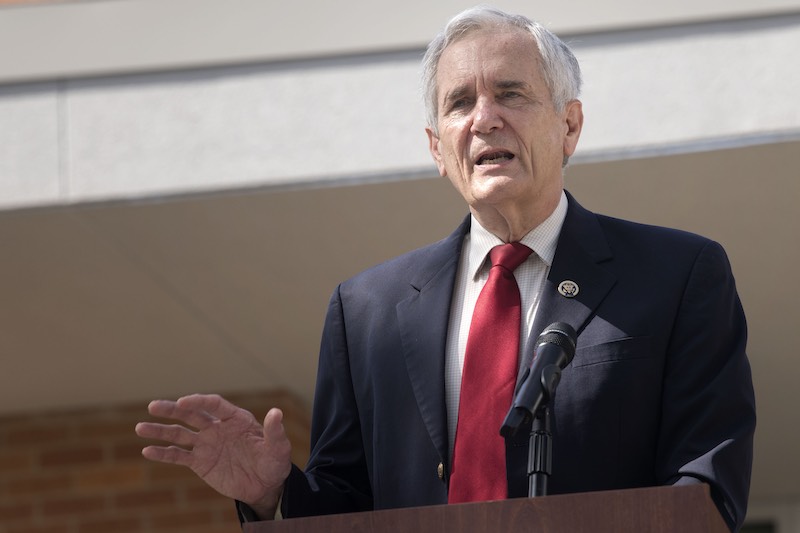 U.S. Rep. Lloyd Doggett speaks at an event in Austin in July 2021 (Photo by John Anderson)

One year ago, U.S. Rep. Lloyd Doggett, D-Austin, had a really great view of a really bad day at the U.S. Capitol, from his third-floor window in the Rayburn House Office Building across the street.

“People had climbed up on the TV camera [mounts] installed for the inaugural, up over the banners,” he told the Chronicle earlier today.”I could see what was happening on both sides of the [Capitol] building. That’s when we got the message to barricade in the office.”

He would remain there for the next few hours while America experienced its first-ever attempt to violently prevent the transfer of power to a new president. While the nearby Longworth and Cannon House Office Buildings were breached – the latter being “where AOC and some others were, with people pounding on their doors,” said Doggett, referring to his colleague Rep. Alexandria Ocasio-Cortez, D-N.Y. – the massive Rayburn edifice remained eerily quiet, at least near Doggett’s office.

When he finally emerged to vote to certify the 2020 results and the election of President Joe Biden, he walked past the damage and wreckage and carnage of the day, which (perhaps needless to say) far surpassed his and other House Democrats’ expectations. “The day we passed the Affordable Care Act, and the day before, where the Tea Party was out there with racial comments and screaming and yelling all day…I had expected that we were going to have a large protest [like that] from them, but nothing like bringing a gallows to hang Mike Pence,” Doggett said. “And particularly, in the wake of all the debate across the country about justice and police, that we’d have these right wing extremists attacking the police, holding that guy’s head in the door, it’s just really shocking. It’s unbelievable that they would do that. But it does reflect the double standard that applies here; it’s okay if they do it.”

The people outside the Capitol who busted in a year ago are slowly facing consequences for their actions, with new verdicts in 1/6 trials coming down almost weekly, although President Trump is still living free in the Palm Beach sunshine. But what of the 157 House members (all Republicans) who refused to certify Biden’s election last year, some of whom almost certainly knew what was poised to happen? Doggett still has to work with these people; how do those conversations go?

“I don’t really talk about it very much,” he replies. “I mean, it’s difficult to even have some conversations; I don’t have conversations with [Georgia’s Rep.] Marjorie Taylor Greene. One of the people on my committee [House Ways and Means, where Doggett is a senior member and chairs the Health subcommittee] led the effort in Pennsylvania; in fact, I think his name was on one of the phony lawsuits. He is co-sponsoring one bill I have, that is in [the] Build Back Better [spending package], to make Pell Grants tax-free. And so, we try to find the narrow areas where we can work together, but that don’t have those grounds for confrontation. I’ve come to the conclusion that many of these people aren’t going to change.”

This intransigence did not start on January 6. “They are the people that ignore climate and COVID realities,” Doggett said. “They believe all these lies, not just Trump’s lies. We just have to remove the barriers to [voter] participation and try to get all the participation we can, and hope that over the future years we can find more common ground on some other issues. But as long as the Republican Party is less a party and more a cult of Trump, I don’t think we’re going to get very many of them to discuss these issues in a rational way.”

Over the past year, Doggett’s fellow Texas Democrats, in D.C. and Austin and elsewhere, have tried to go to the mattresses to defend voting rights and remove the barriers he alludes to, so far without tangible results. “There is still reason to have hope,” he said. “It’s not all dark, even if we’re doing a candlelight vigil tonight [at the Texas Capitol] on the edge of darkness, which is appropriate.”

At that vigil, organized by Indivisible Austin, Doggett joined quorum-breaking Austin state Reps. Gina Hinojosa, Celia Israel, and Vikki Goodwin; former Galveston mayor Joe Jaworski, the leading Dem contender for Texas Attorney General, who did a little bit of tasteful politicking and Ken Paxton-bashing; party activists Ash Hall and Mark Trahan; and about 100 others shivering in the COVID-fringed cold, in front of the People’s House as wary DPS troopers looked down from the portico above the South Steps. All was calm.

The mood was somber yet determined, as speakers called for people to stay present to the crisis, take “strong, persistent and determined action,” (Hinojosa, quoting “Letter from a Birmingham Jail”), and not be discouraged or afraid. Many harkened back to Biden’s words this morning, in a remarkably intense and forceful address in the U.S. Capitol’s Statuary Hall. “You can’t love your country only when you win,” Biden said. “You can’t obey the law only when it’s convenient. You can’t be patriotic when you embrace and enable lies.” (He did not mention Trump by name.)

In a portion referenced by Doggett at tonight’s vigil, the president said, “Jan. 6 marks not the end of democracy, but the beginning of a renaissance of liberty and fair play. I did not seek this fight brought to this Capital one year ago today. But I will not shrink from it either; I will stand in this breach, I will defend this nation, and I’ll allow no one to place a dagger at the throat of democracy. We will make sure the will of the people is heard, that the ballot prevails, not violence.”