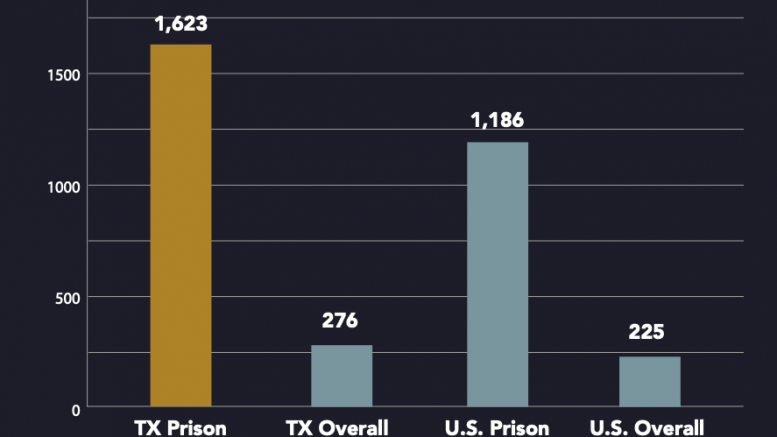 Nine of the approximately 200 inmates in Texas prisons who have died from COVID-19 in recent months had already been approved for parole. Another 21 inmates who died had been due for mandatory release in less than two years.

That pair of findings comes from a recent study on the impact of COVID-19 in state prisons and jails from UT’s LBJ School of Public Affairs.

Titled COVID and Corrections: A Profile of COVID Deaths in Custody in Texas, the study shows that from the onset of the pandemic through early October, 231 people died of COVID-19 in state lockups: 190 state prisoners, 21 staff members, and 14 state and county jail inmates, the latter group including 11 pretrial detainees who had not been convicted of any crime. It’s a mortality rate that’s 35% above the national average for prison systems and nearly 2.5 times higher than the COVID-19 death rate for Texas as a whole. 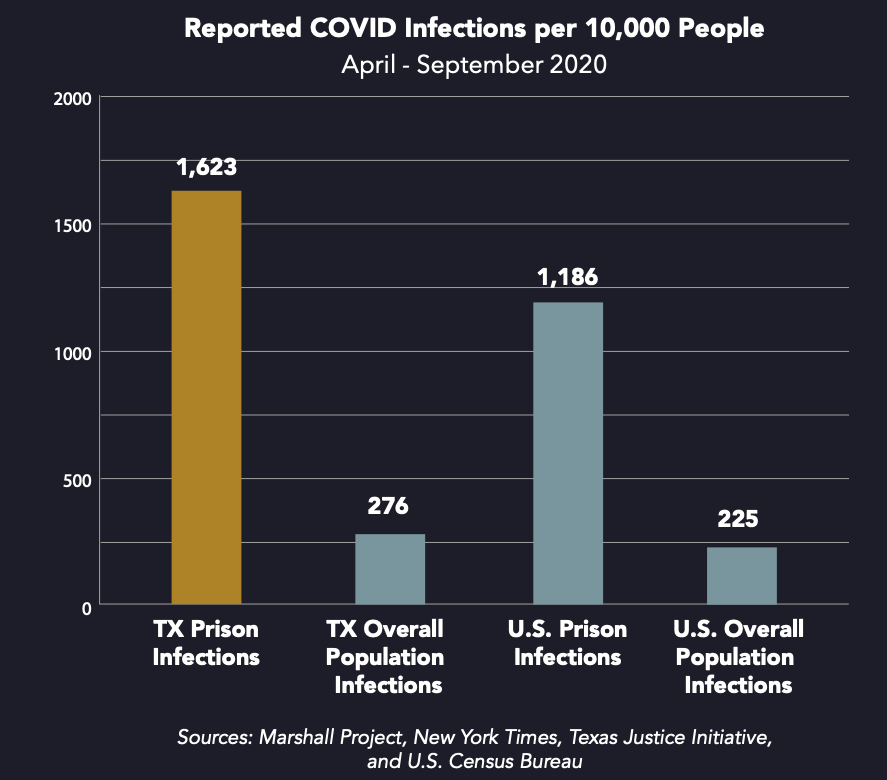 Charts from LBJ School’s COVID and Corrections: A Profile of COVID Deaths in Custody in Texas

Texas’ infection rates are even worse, with more than 23,000 reported cases among those incarcerated, nearly five times the rate among all Texans. The researchers have found that deaths from natural/nonviolent causes in Texas prisons doubled this year, meaning that the COVID-19 figures understate the disease’s true mortality rate; it can take several months for a death to be confirmed, through autopsy, as being COVID-related. Unlike in other states that faced prison COVID-19 crises at the start of the pandemic, such as Michigan, Ohio, and New Jersey, rates of infection and death in Texas lockups have remained high through the summer and now into fall.

Prison reform advocates say it didn’t have to be this way. “It was absolutely acknowledged in March that we were in the midst of a global pandemic and that nursing homes, prisons, and jails were hot spots for COVID-19,” said Lauren Byrd-Moreno, whose husband is serving 20 years for a nonviolent drug offense. “I started working on reaching out to Gov. [Greg] Abbott in March, and still to date have received no answer.”

Byrd-Moreno and groups like Texas Advocates for Justice, Our Revolution, and Grassroots Leadership have asked Abbott to issue executive orders authorizing the release of medically vulnerable inmates and those near the ends of their sentences, as (Democratic) governors in Colorado, Pennsylvania, Virginia, and Washington have done. Abbott has instead done the opposite: In late March, he issued an executive order requiring officials to disregard the novel coronavirus when making decisions on paroling inmates or on freeing those awaiting trial in either state or county jails, saying “releasing dangerous criminals in the streets is not the solution.” 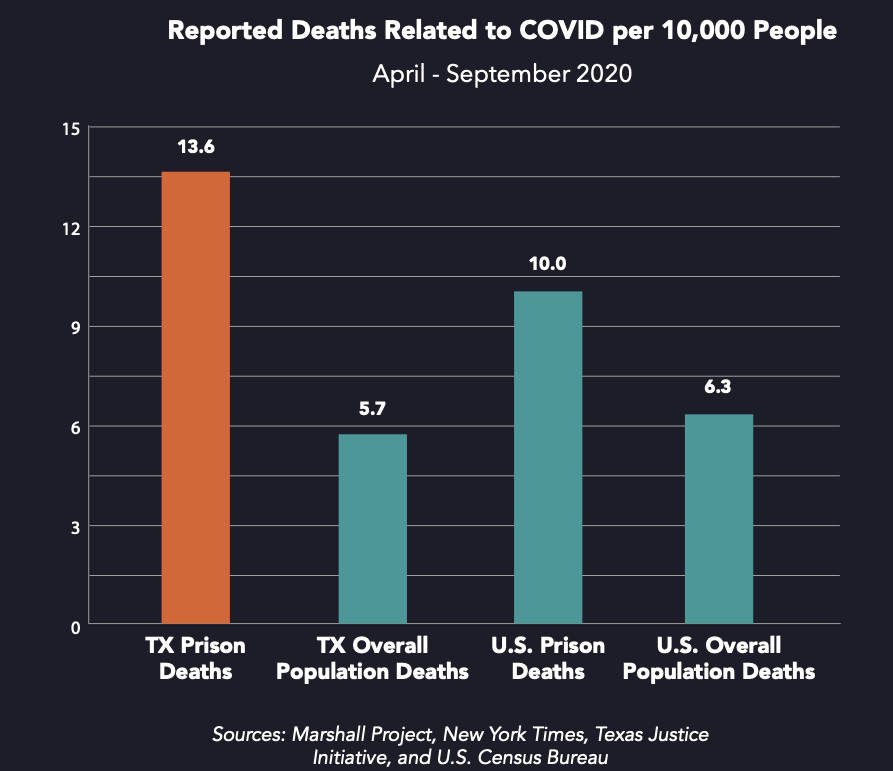 Challenges to Abbott’s executive order have been rejected by both the Texas Supreme Court and the Court of Criminal Appeals. Byrd-Moreno said she and other organizers have called Abbott’s office thousands of times and arranged a Twitter storm which sent over 55,000 tweets in one day. In May and again in June, the advocates rallied at the State Capitol and the Governor’s Mansion.

The governor isn’t the only one charged with caring for the state’s prisoners – the Board of Pardons and Paroles and the Texas Department of Criminal Justice make many decisions regarding how inmates are held and when they are released. As the crisis has unfolded, all those responsible for the well-being of prisoners have marched in lockstep, leaving advocates like Jorge Renaud of Latino Justice disgusted.

“The governor has repeatedly shown an astonishingly callous attitude toward the tens of thousands of individuals … at risk of dying by the virus, and toward their families,” Renaud said. “TDCJ officials have lied about safety precautions. Legislative leaders have abdicated their responsibility and deferred to a governor who prefers looking tough to demonstrating any compassion to those in his care.”

In addition to data on the numbers of deaths and infections, the UT study analyzes the demographics of those who died, their ages, and how close they were to completing their sentences. The study found that the median age of the victims was 64; 80 percent were 56 or older. Units designed for older prisoners like the Rufus H. Duncan Geriatric Facility in Diboll, where COVID-19 has killed 6%of the inmates, were hit the hardest.

A huge number of prisoners – 15,000 of the total population of 120,000 – have already been approved for parole. Most are waiting to complete classes on lifestyle strategies or drug addiction, called “programming,” that are required for their release but that were put on hold as prisons locked down in the spring. At least nine of those parole-approved inmates contracted and later died from COVID-19.

Advocates have long argued that BPP should change procedures to allow inmates to complete programming on the outside after their release. The issue remains salient now that a new wave of disease appears likely to arrive as winter begins, coinciding with the start of the 87th Texas Legislature in January. Advocates such as Byrd-Moreno will be trying once again to get state leaders to listen.

“They are in over their heads,” she said, “and the people in charge refuse to send folks home to make the situation manageable. I really don’t know what to do anymore but I’m not giving up. I will keep fighting until I fall over dead.”