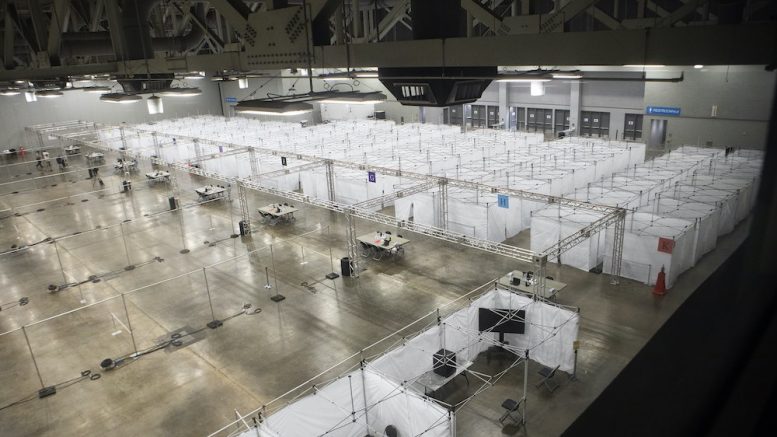 Public health authorities first set up the field hospital at the Convention Center in July, though it was ultimately not needed at the time. The Alternative Care Site was activated on Tuesday. (photo by Jana Birchum)

The Alternate Care Site at the Austin Convention Center opened this morning to take in COVID-19 patients, as Central Texas’ continued surge in cases and hospitalizations puts pressure on area hospitals.

This is the first time the Downtown field hospital has opened since health officials first prepared the site in July. Interim Health Authority Dr. Mark Escott, who informed city and county officials of the opening during briefings earlier today, said the ACS is staffed to accommodate 25 patients immediately and, as it’s currently assembled, can receive up to 250. “The Convention Center can accommodate almost 1,000 patients if we get to the stage where we need to surge that much,” Escott told the Travis County Commissioners Court. “Our hope is that we will not need to utilize it to any significant level, but [the ACS] is an option for us and will create the opportunity to decompress the hospitals, particularly as the cases and hospitalizations continue to surge.”

The field hospital will take in patients from 11 Central Texas counties who are referred directly from hospitals after they’ve been determined to be stable enough for transfer; patients will not be able to show up on their own and receive care. “This is to ensure that folks are stable, and that by moving them to this facility we can anticipate that they are not going to have significant complications from there,” explained Escott, noting this model has been successful in other alternate care sites for COVID-19 patients.

Right now, said Escott, the ACS is focusing on low-acuity patients who don’t need a lot of support but still need to be in a hospital; these may be patients who need supplemental oxygen, assistance with oral medications, or IV infusions. “As the situation worsens and as our facility increases its capability, [the ACS] will be able to move up to moderate-acuity patients who may need help with other things,” he added.

Last week the city and county submitted a request for staffing to the Texas Division of Emergency Management, which was approved on Saturday (Jan. 9) and is using private contractors. Local officials confirmed over the weekend that they were activating the field hospital, following a week when Austin Public Health reported all-time highs for many COVID-19 metrics in Austin and Travis County.. On Sunday (Jan. 10), the Department of State Health Services announced that COVID-19 patients comprised more than 15% of the hospital population in Central Texas for seven consecutive days, which per Gov. Greg Abbott’s GA-32 executive order triggered a mandatory reduction in business capacity from 75% to 50%.