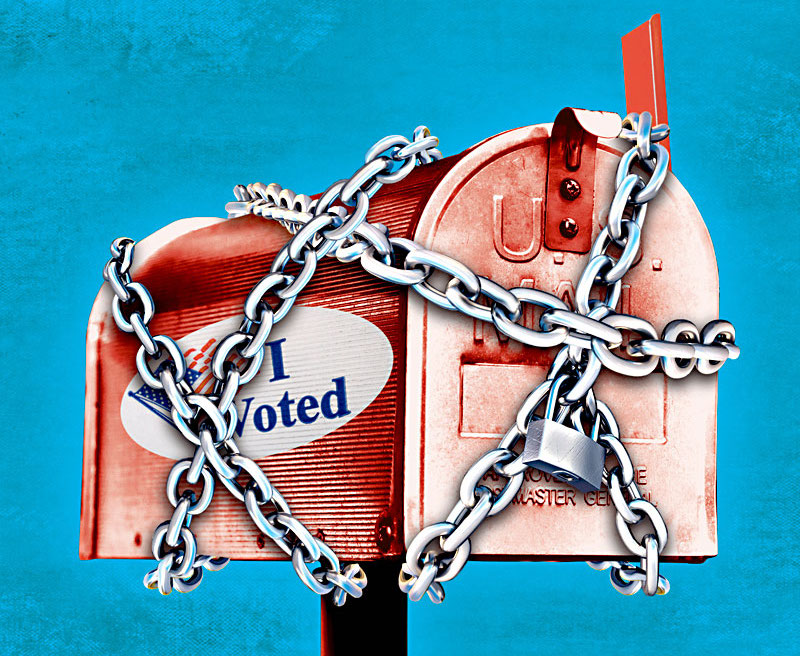 It may be cold comfort to Texans voting in person early or on July 14, but there remains a chance that the U.S. Supreme Court will act soon enough to allow more generous mail ballot rules and better planning for the November general election.

Until then, Texas will remain one of the few states still placing tight restrictions on the ability of voters to do so by mail ballot.

In a terse order issued last Friday afternoon, June 26, the Court declined to lift a stay on a federal court injunction that would have effectively allowed universal vote by mail in Texas. According to the order, Justice Samuel Alito (who oversees the Fifth U.S. Circuit Court of Appeals) referred the matter to the full Court, which declined to lift the stay. Alito’s order was in response to a June 16 filing by the Texas Democratic Party, which had asked the Court to lift the Fifth Circuit’s stay of a ruling by San Antonio federal judge Fred Biery to allow VBM to all eligible Texas voters, under pandemic conditions. (“Supremes to Texas Voters: Drop Dead,” June 26)

Despite the setback, TDP general counsel Chad Dunn told the Chronicle there remains “plenty of time” before the fall for action by the Fifth Circuit or SCOTUS to enable universal VBM in Texas.

The TDP filings also asked the Court to expedite consideration of the constitutional merits of the Party’s suit, which argues that the 26th Amendment (that enabled those 18 and older to vote) explicitly prohibits discrimination against voters on the basis of age. (One eligibility standard for mail ballots in Texas is that the voter be 65 years or older.) The full Fifth Circuit has yet to hear the TDP suit – a three-judge panel maintained the court’s initial stay, in an unusually lengthy order that ruled on the merits of the appeal in advance of any hearing by the full court. (“Fifth Circuit Extends Its Vote-by-Mail Order,” June 15)

In a note accompanying the Supreme Court order, Justice Sonia Sotomayor wrote: “This application raises weighty but seemingly novel questions regarding the Twenty-Sixth Amendment. I do not disagree with the decision to refrain from addressing them for the first time here, in the context of an emergency application to vacate a stay of an injunction. But I hope that the Court of Appeals will consider the merits of the legal issues in this case well in advance of the November election.”

A majority of U.S. states already allow “no-excuse” VBM – including five that conduct their elections almost entirely by mail – and more have relaxed mail-ballot restrictions in response to the COVID-19 pandemic. Texas is one of a handful of states still restricting mail ballots to limited categories of voters.

It’s unclear whether Sotomayor’s exhortation will carry any weight with the very conservative Fifth Circuit, but Dunn says her note will encourage the lower court “not to dilly-dally.” The state’s Fifth Circuit brief, in response to the appeal there, was due Monday, to be followed by any response from the TDP (which is also representing three individual voters), and Dunn says they’ll be reiterating a request for early consideration.

Attorney General Ken Paxton, whose office has been representing the state in blocking any expansion of VBM, was quick to applaud the Alito order “for following the law and refusing to order mail-in balloting that the Texas Legislature has forbidden.” Paxton’s congratulatory press release reiterated now-reflexive but unsubstantiated Republican claims of potential voter fraud. “Universal mail-in ballots, which are notoriously vulnerable to fraud, would only lead to greater election fraud and disenfranchise lawful voters. … My office will continue to fight for safe, free, and fair elections.”

TDP Chair Gilberto Hinojosa also issued a statement. “We are disappointed that the Supreme Court did not weigh in now and provide needed relief and clarity for voters ahead of the primary runoff. … The case proceeds on in other filings before the U.S. Supreme Court and the Fifth Circuit and therefore, hope remains that the federal courts will restore equal voting rights in time for the November elections. We will not stop fighting for the rights of voters.”

A majority of U.S. states already allow “no-excuse” VBM – including five that conduct their elections almost entirely by mail – and more have relaxed mail-ballot restrictions in response to the COVID-19 pandemic. Texas is one of a handful of states still restricting mail ballots to limited categories of voters – absentees, persons 65 and older, persons with disabilities, and persons in jail but otherwise eligible to vote.

Two lower courts (state and federal) have ruled that the current pandemic means that all persons at risk of COVID-19 infection are effectively “disabled” under state election law, but the Texas Supreme Court ruled otherwise, while acknowledging that for voting purposes, each person is the sole judge of his or her health status. Without a decisive clarification from the courts, Texas voters who choose to protect themselves and their families by requesting mail ballots face threats of investigation or prosecution by the attorney general or local prosecutors.