The Austin police officer who killed Michael Ramos in 2020 will not be protected by qualified immunity in the civil suit filed against him after a judge in the case denied motions invoking the defense Sunday. 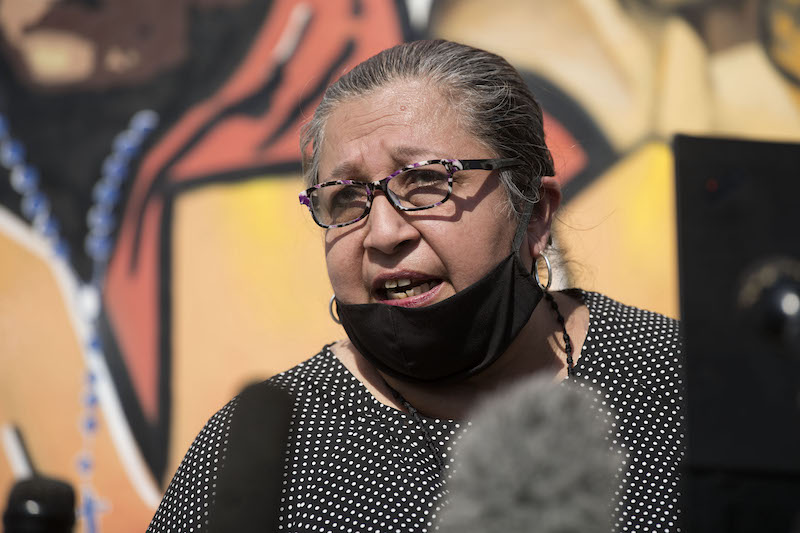 Brenda Ramos, mother of Michael Ramos, who was killed by an Austin police officer in 2020 (Photo by John Anderson)

Now Austin Police Department officer Christopher Taylor has two choices – go to trial, or settle with Brenda Ramos, Michael’s mother and plaintiff in the case. (That is, pending an appeal to the Fifth Circuit should Taylor go that route.)

Brenda Ramos filed the civil action on Dec. 30, 2020, after Taylor shot and killed her son in one of the highest profile shootings in recent APD history. U.S. District Judge Robert Pitman issued an order Dec. 18 denying a motion by the defense that would have dismissed the suit entirely. Pitman also denied and granted motions made by the city’s attorneys regarding claims against the city.

The evening Mike Ramos died, seven Austin Police Department officers, including Taylor, responded to a 911 call alleging that Ramos was sitting in his car with a gun in the parking lot of a South Austin apartment complex. Body cam footage shows the officers arrive on-scene, then surround Ramos and begin shouting conflicting orders at him with their guns drawn. Ramos’s hands remain in the air during the entire encounter, as seen in witness cell phone footage and on the officers’ body-worn cameras. Eventually, APD officer Mitchell Pieper – still undergoing field training – fires at Ramos with a lead-pellet bag, hitting him. Ramos dives into his car and begins to slowly drive away, at which point Taylor fires the fatal shots.

Pitman’s order is noteworthy for a few reasons. For one, it denies Taylor’s qualified immunity claim, which will allow the lawsuit to proceed to trial or settlement, pending the outcome of an appeal to the Fifth Circuit Taylor could make. Qualified immunity is a legal principle that protects government employees from being sued in civil court for committing certain actions while performing their jobs – like shooting and killing people in the case of law enforcement officers.

Plaintiffs have to show that the defendant violated a “clearly established” constitutional right or legal precedent backed up by case law and evidence that a “reasonable person” in the officer’s position would have known their actions were not legally justified. QI is often invoked by police officers in excessive force lawsuits and it is a notoriously difficult standard for plaintiffs to overcome. As a legal doctrine, it has fallen under scrutiny by left- and right-wing thinkers for protecting government officials – particularly police officers – with too broad a legal shield.

Judge Pitman’s order isn’t a complete win for Brenda Ramos. It also dismisses four claims alleged by Ramos against the city: that the Austin Police Department used or condoned disproportionate use of force against people of color, that it failed to properly train APD officers, and that it failed to properly supervise them. At the same time, Pitman denies the city’s motion to dismiss three other notable allegations made by Ramos: that the six officers who responded to the 911 call alongside Taylor chose not to intervene in the shooting, that the city chose not to investigate excessive violence, and that the city made the deliberate choice not to discipline officers for excessive force. These three claims will be under consideration in any future trial or settlement.

The latter two claims refer to the fact that Taylor was allowed to remain on duty after fatally shooting Dr. Mauris DeSilva on July 31, 2019. DeSilva was undergoing a mental health crisis when he encountered Taylor and another APD officer, Karl Krycia, at the downtown high-rise where DeSilva lived. Both Taylor and Krycia were indicted for murder in the DeSilva killing (and Taylor was later indicted for murder in the Ramos killing).

“Given the notoriety of the shooting,” Pitman wrote about the DeSilva killing, “it is more than plausible that the City knew of the shooting but deliberately chose not to discipline the officers involved.” Pitman went on to write that the plaintiff “has plausibly alleged that the failure to discipline [Taylor] directly caused the death of Ramos. In both instances, Taylor shot an unarmed man, and it is reasonable to infer that the city’s failure to sanction the shooting of Dr. DeSilva implicitly condoned APD’s excessive use of force.”

The Chronicle reached out to the city and the attorneys representing Ramos and Taylor, who have not yet responded.