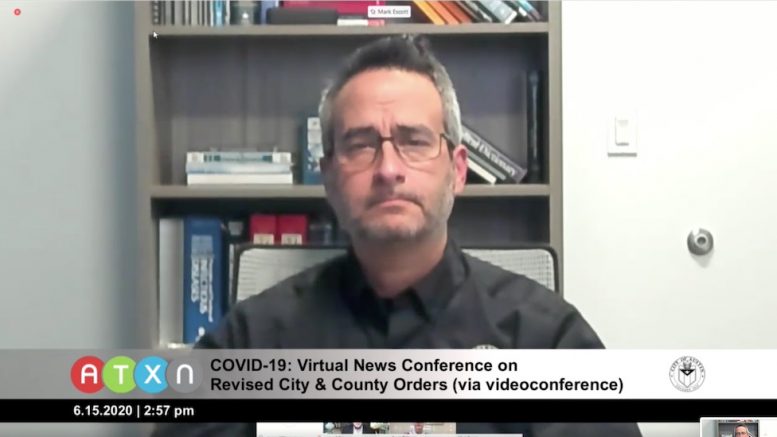 After a dramatic surge in COVID-19 cases in the past week, Austin Public Health has confirmed the city and county’s move into Stage 4 (orange) of its risk-based guidelines, as officials implored Austinites to commit to wearing masks and staying six feet apart to “flatten the curve again.” 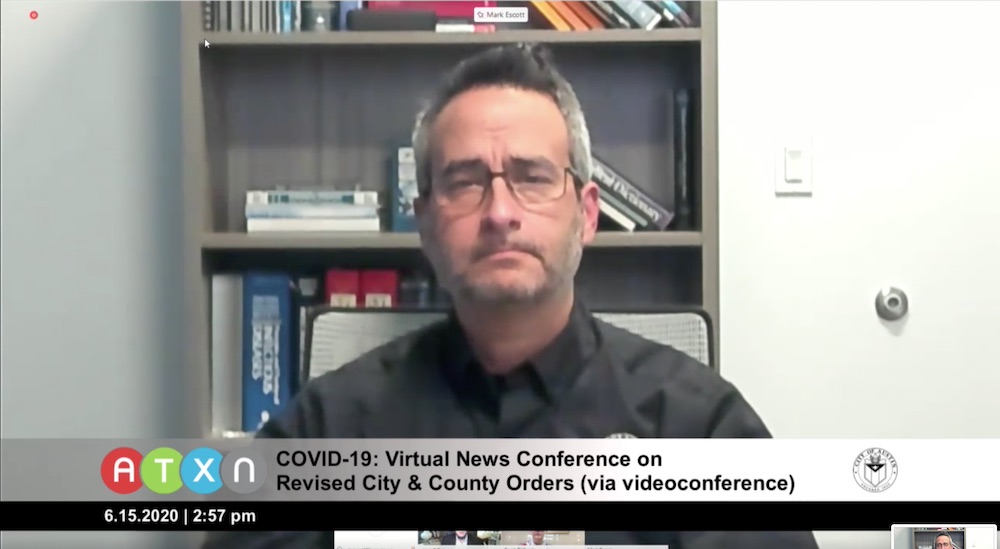 As they have for months, Austin Interim Health Authority Dr. Mark Escott, Mayor Steve Adler, and former Travis County Judge Sarah Eckhardt (now a special assistant to Judge Sam Biscoe) appealed to the better angels of Austin’s nature as they urged residents to make the right choices, even with the threat of enforcement having been taken away by Gov. Greg Abbott. “We each need to look into ourselves right now, and make the individual choices that will indicate to ourselves and others what we personally value,” said Adler. “We get to decide for ourselves how important it is for us to protect our neighbors and our community.”

The mayor added that, with thousands of Austinites taking to the streets to declare that Black lives matter, “because they do, you have to decide now, with your actions, whether you mean that, whether it’s not just a slogan but something you can put into practice.” As the COVID-19 numbers have spiked, the pandemic’s disproportionate toll on communities of color in Central Texas has not changed. 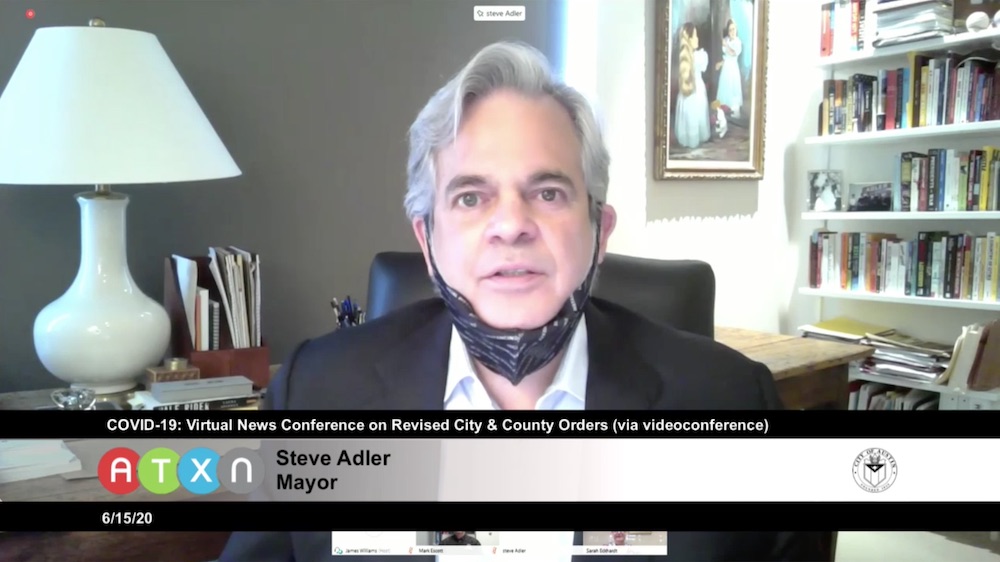 That spike is not just a blip. Last week’s total of new confirmed cases in the five-county Austin MSA, 799, is 90% higher than the week before. Hospitalizations increased by 58%, and usage of intensive care beds and ventilators also increased, though not as dramatically. The key indicator of our risk in APH’s five-stage model – the 7-day rolling average of new COVID hospitalizations – now stands at 20.6 (20 being the threshold for Stage 4). Six days earlier, it had stood at 11.3; it’s likely to continue its fast climb, with 30 new hospitalizations reported in the last day alone.

At Monday’s press conference, Escott assured the community that “hospitals are in good shape right now” and should be for the next week or two, and that “people who need health care should not wait.” Now is the time for those visits you’ve been putting off, since the prospect of a health care system overwhelmed by COVID cases about a month from now is very real. 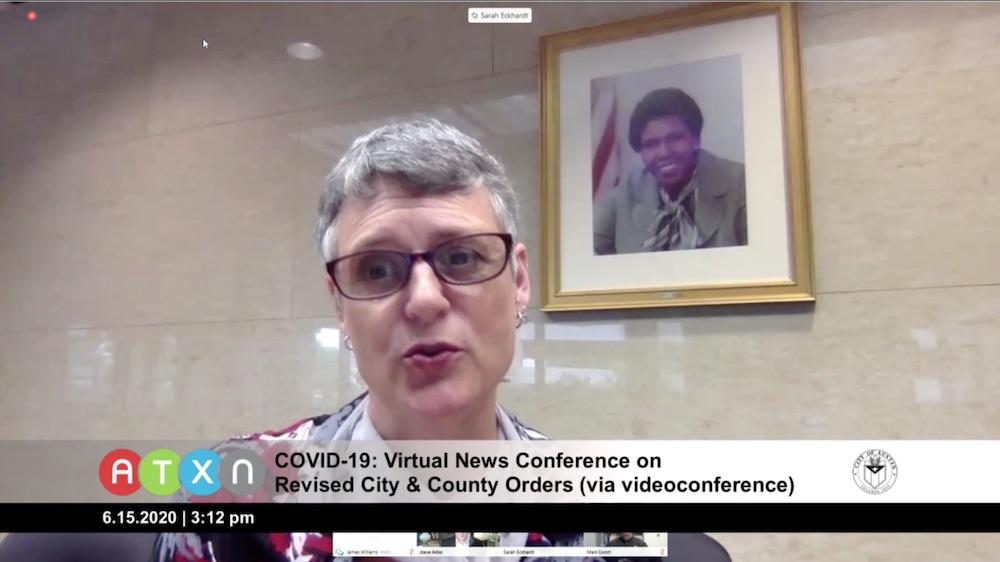 While the city and county have prepared a medical surge plan to create extra capacity should that happen, Escott cautioned that “ultimately, those are not plans we ever want to implement,” since they inevitably mean some people would get less effective care. And with every big Texas metro seeing similar surges – or worse, as in Dallas – “there simply aren’t enough resources and enough people” to maintain that extra capacity statewide. “That’s why we need people to think about what they’re doing and act and modify their behavior.” 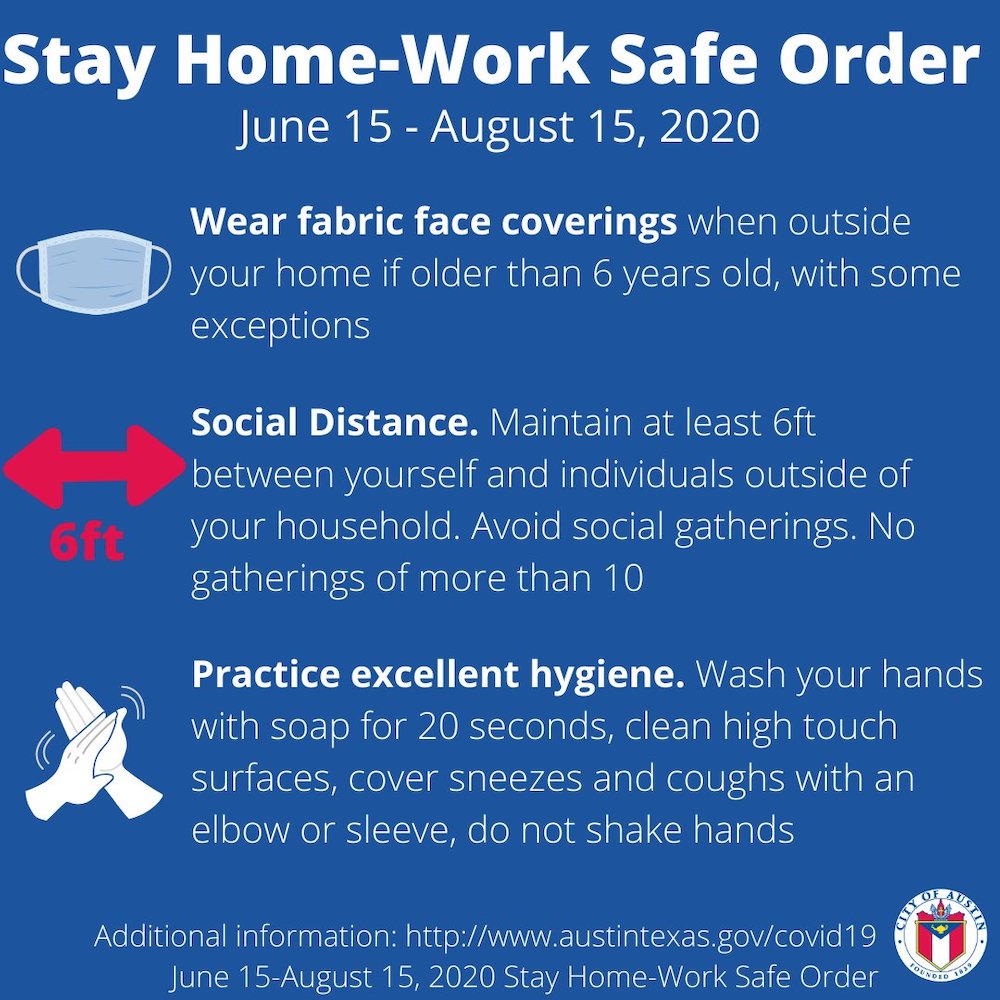 It would sure be nice if local leaders could do more than ask nicely, but any chance of cooperation from Abbott appears scant. While Adler did note that the governor’s office has been in continued contact with him and other local officials, Eckhardt recounted how Bexar County Judge Nelson Wolff had asked Abbott for authority to require people to wear masks in public, and was told no,”which was very disheartening,” she said. “The governor has very plainly spoken that he believes that personal choice will carry us through this, more than regulation would.”

The risk-based guidelines for Stage 4 are actually only slightly different from where we had been in Stage 3; the major change is that those at high risk (65+, those with underlying conditions, or people who live in those households) are urged to not go out unless absolutely necessary. “We have widespread community transmission,” Escott said. “I don’t mean that to frighten people but so they can understand the facts; it’s everywhere. You need to be careful every time you go out.” But for those at lower risk, that care simply means wearing a mask, maintaining distancing and hand-washing, and not going out if you might be sick. “I really do not understand why, as a public health official and as a physician, why we can’t get behind those simple things.”