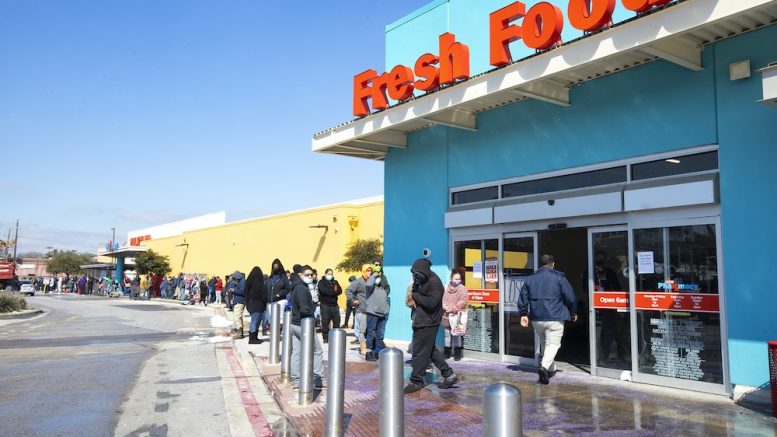 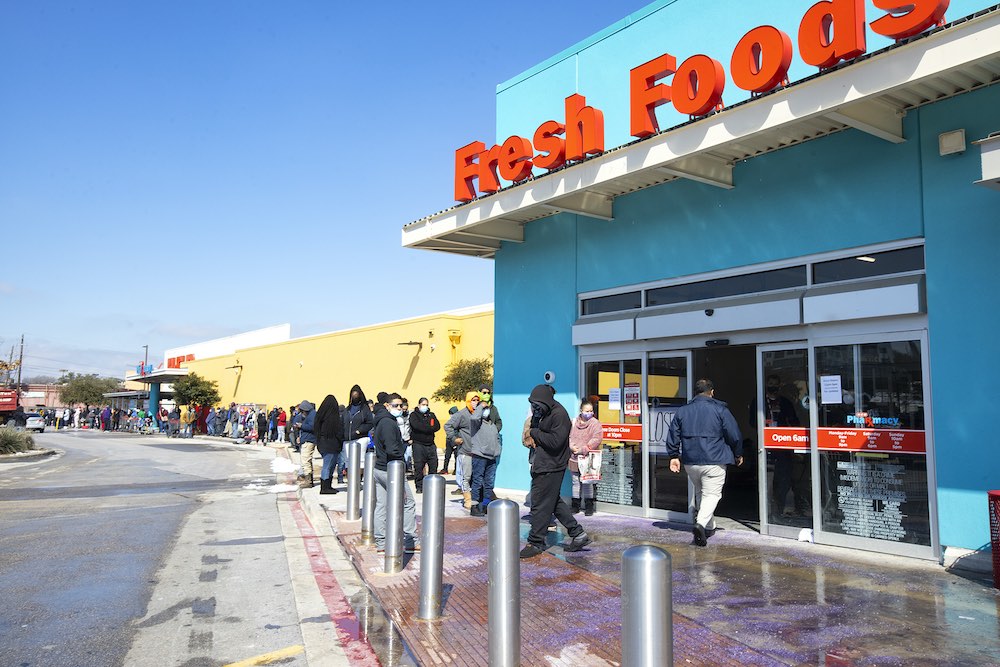 Approximately 250 people wait in line to get into the H-E-B at E. Riverside on Feb. 19. The line stretched the length of the store, down and back the side of the store, and out to the street. (photo by Jana Birchum)

With power restored to more than 96% of Austin Energy customers, local leaders’ priority has shifted to restoring water service to Austin residents in the wake of the Texas winter storm crisis.

Austin Energy General Manager Jackie Sargent reported that as of noon on Friday, Feb. 19, just 22,000 of the public utility’s customers were without power, down from 10 times that number – approximately 42% of the utility’s customers – at the worst point of the crisis Tuesday. Early Friday morning, the Electric Reliability Council of Texas, which manages the state’s electrical grid, announced an end to its emergency and informed utilities they no longer needed to “shed load” as a means of preserving energy supply.

While most of the more than 40,000 megawatts (nearly half of normal winter generation) that went dark this week has been brought back up, retail providers like Austin Energy still have to repair the storm damage in their communities before they can restore power to all customers. “Our hardest days may lie ahead,” Sargent said, as AE crews labor “around the clock” to complete this high-risk work, carried out slowly to protect crews; it “may take several days to complete.”

Austin Water customers should also expect to wait through the weekend before full potable water service is returned to homes and businesses. AW Director Greg Meszaros said the city’s water system had “made good progress over the past 24 hours” and that most customers should – according to his analysis – have water service return at high pressure “through the weekend.” But the boil-water notice, which can’t be lifted until the repressurized water supply is tested for bacterial contaminants, is likely to continue into next week, Meszaros said.

The improving water pressure has mostly come from centrally located water reservoirs refilling. (These are not the Highland Lakes, but the enclosed massive water tanks you see around town.) Meszaros described the utility’s central service district and its reservoirs – which stretches far beyond Downtown, primarily to the east – as the “backbone of the system.” Water pressure must build up there before it can be circulated to outlying regions, which primarily lie at higher elevations; AW’s online maps show the different status of these areas. Before water pressure is fully restored, crews must scour the entire system to identify leaks, burst pipes, and water main breaks.

If water pressure is turned up before that damage has been repaired, it’s possible that the entire system could drain again – which is what nearly happened on Thursday – and leave large swaths of the city dry. Only after that can bacteriological testing be conducted to lift the boil water notice, but that can happen quite rapidly, Meszaros said. (Other Texas communities are not as well-supplied as Austin with testing labs, and the Texas Commission on Environmental Quality says it’s working to address the gaps.)

Customers with power, water, or both, are urged to continue conserving. While supply to the ERCOT grid is currently greater than statewide demand, that could change as utilities continue to bring customers online. That means keeping your thermostat at 68 degrees, unplugging unused electronics, and limiting usage of lights at home. Similarly, Austin Water customers are asked to avoid running dishwashers and washing machines to ensure the city’s reservoirs – which Meszaros says are about one-third full – continue to fill.

Emergency water supplies for Austinites without any water service are being brought online after a day’s worth of challenges that several sources told the Chronicle were exacerbated by a sluggish state response. Cronk said the city would finalize and publicize by Friday evening water distribution sites that will be safe for residents to reach, with priority given to higher-need areas (as viewed through an “equity lens”); he encouraged those who can purchase water from other sources to do so.

In addition to small amounts of donated water – lots of 20 pallets or less – the city purchased outright 1 million gallons of bulk water for delivery over the next several days. City emergency teams are prioritizing hospitals, dialysis centers, and other critical health care sites, as well as warming centers and shelters and vulnerable neighborhoods. Water brought into Texas by the Federal Emergency Management Agency earlier this week remained in Fort Worth until, according to several sources, Travis County Judge Andy Brown contracted with truckers to go fetch it.

Gov. Greg Abbott said at a Friday afternoon press conference he had issued executive orders to speed distribution of relief supplies, but sources with knowledge of the federal disaster response effort told the Chronicle the state “had not lifted a finger” to make sure supplies got to Austin, even as they reached other Texas cities in need. A planeload of supplies directly from FEMA is set to land at Austin’s airport before nightfall.

In an emergency called Commissioners Court meeting Friday morning, Brown extended his Feb. 14 disaster declaration to Feb. 26. Wes Priddy with the Travis County Sheriff’s Office briefed the court on the water situation at county jails; despite some burst pipes, local inmates have been spared the horror stories detailed by local outlets at the Harris County Jail and at Texas Dept. of Criminal Justice units.

Mayor Steve Adler also announced in a council message board post that City Council would meet on Thursday, Feb. 25, to be briefed by staff on emergency response to COVID-19 and the cold weather storms. Council will also discuss “fee waivers and other relief to our residents” at the meeting. In a tweet, Council Member Greg Casar said that he has called on Austin Energy and Austin Water to develop “an immediate bill relief plan” to help customers who will need to damage busted pipes and restock food, in addition to paying their regular bills. Details were not immediately available, but Casar said the program could “allow people to pay” their normal bill, or “clear the bill” if a customer cannot afford it. At Friday’s press conference, Meszaros emphasized that AW did not “want to reap any financial benefit” at the expense of distressed Austinites, and that he’s already started working with Cronk on “a menu of options” for relief to present to Council.