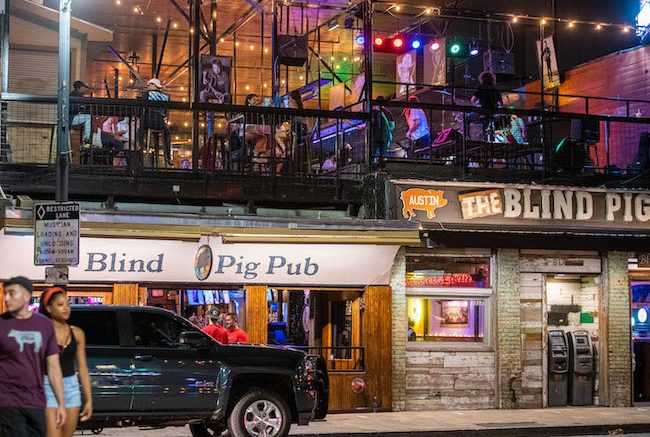 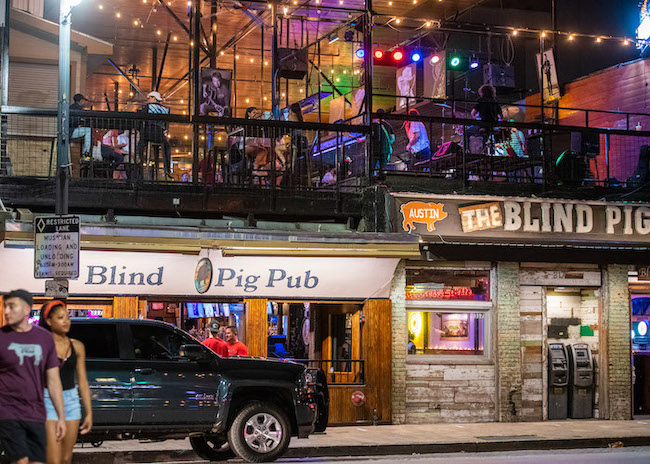 A band plays on the upstairs patio stage of the Blind Pig Pub on East Sixth Street back in May. (Photo by David Brendan Hall)

Texas Attorney General Ken Paxton has sued Austin and Travis County after local officials announced dine-in limitations over New Year’s Eve weekend amidst what Austin-Travis County leadership is calling our “most dangerous surge prospects” yet in the COVID-19 pandemic.

Last night the city and county co-issued new orders mandating that establishments serving food and beverages from an on-site kitchen, food truck, or catering service – a classification that’s come to include restaurants, some bars, and live music venues – must limit dine-in operations between 10:30pm-6am effective tomorrow (Dec. 31) through Sun., Jan. 3, at 6am. Such businesses may still operate during those hours using drive-through, curbside pick-up, take-out, or delivery, while dine-in operations remain permitted between 6am-10:30pm.

Paxton and Governor Greg Abbott, both of whom have sought to limit local officials’ authority to enact stricter COVID-19 mandates throughout the pandemic, were quick to voice opposition to Austin-Travis County’s new orders. “This shutdown order by Austin isn’t allowed. Period,” Abbott tweeted on his personal Twitter profile last night. Earlier this afternoon Paxton issued a letter to Mayor Steve Adler and Travis County Judge Andy Brown demanding they either rescind or modify the orders to comply with Abbott’s GA-32 executive order, which – as Paxton points to in his letter – supersedes any conflicting local COVID-19 order to the extent such an order restricts services allowed by GA-32. Under Abbott’s order, “‘[e]very business establishment in Texas shall operate’ under certain protocols, but without limitations on those establishments’ hours of operation,” wrote Paxton, who goes on to argue Austin’s orders limiting dine-in services during specific dates and times are thus “unlawful and unenforceable.” The Texas A.G. stated he was open to conferring with the local officials before 12:30pm today. “Otherwise,” he wrote, “I, on behalf of the State of Texas, will take legal action against you.”

Not long thereafter, Paxton announced this evening that he’d filed a petition in Travis County district court for a temporary injunction and a temporary restraining order over the local measures. In addition to Austin and Travis County, Adler and Brown are also named defendants. Paxton said in a statement, “The fact that these two local leaders released their orders at night and on the eve of a major holiday shows how much contempt they have for Texans and local businesses. They think breaking the law is a game of running the clock before anyone can do anything about it.”

In a press conference held prior to Paxton’s letter, Adler told reporters the new orders don’t violate Abbott’s executive order. Austin-Travis County leadership, who were joined by Interim Health Authority Dr. Mark Escott and Dell Medical School’s Chair of Internal Medicine, Dr. Michael Pignone, said such orders were being issued in an effort to avoid an unsustainable surge of COVID-19 cases that could overwhelm Austin’s hospital and ICU capacity in a matter of weeks.

Last week Austin Public Health declared Austin-Travis County had entered Stage 5, which is the highest level of local pandemic risk guidelines, in the face of a post-Thanksgiving surge that’s only worsened closer to the new year. Since Dec. 1, COVID-19 cases have increased 80%, said Escott, who added that in the past eight days alone, the number of COVID-19 patients in Austin-area ICUs is up 50%. For the week ending on Dec. 26, Austin’s positivity rate stood at 12.7% – an increase of almost one-third from the previous week.

“All these statistics are heading in the wrong direction,” said Pignone. Should these trends continue, explained Escott, Austin could find itself in need of 1,500 hospital beds and more than 500 ICU beds for COVID-19 patients by the end of January – a number of beds that “we just don’t have,” he said.

Gatherings between people living in separate households while not wearing face masks continue to carry the biggest potential risk for the transmission and spread of the novel coronavirus. That’s why, said city and county officials, the temporary dine-in orders seek to limit opportunities for residents to gather without wearing masks at restaurants and bars – activities which local health officials since November have stressed repeatedly being a top concern for disease spread. “We have a narrowly tailored order that focuses on operational change to protect against the most dangerous situation that we can,” said Adler.

In a series of tweets posted by the Texas Restaurant Association in response to Paxton’s letter, the association commended Abbott and Paxton for “defending Austin restaurants.” The group wrote, “Restaurants are deeply invested within their communities, and so they continue to do all they can to prevent the spread of COVID-19, often at tremendous cost. Closing indoor dining will not prevent holiday celebrations; it will simply move them from highly regulated businesses into completely unregulated spaces at a critical time in our COVID-19 response.” TRA continued, “The public is exhausted and confused, and it’s past time that our leaders stop looking for scapegoats and rally around those prevention strategies that we know work like wearing a mask, social distancing, and avoiding unregulated gatherings.”

Should the orders proceed as they are written now – barring any interference by Paxton – bars and restaurants found to be in violation of the dine-in limitations risk being charged with a $1,000 fine. Still, local officials urged that the power to really curtail the impact of the disease on the Austin area falls ultimately to residents’ decisions to not engage in high-risk activities. “We’re never going to be able to enforce our way to compliance levels in the city that are really necessary to keep us safe,” said Adler. As Pignone explained, “This is really about the public doing the right thing. If we’re relying on citations and enforcement, we’ve kind of already lost the battle. We really need to do the right thing to protect the members of our community, to protect our health care workers, and, you know, really to keep people alive.”