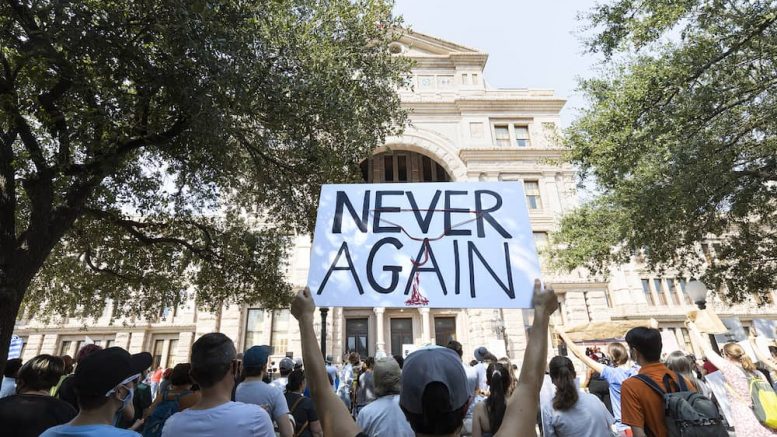 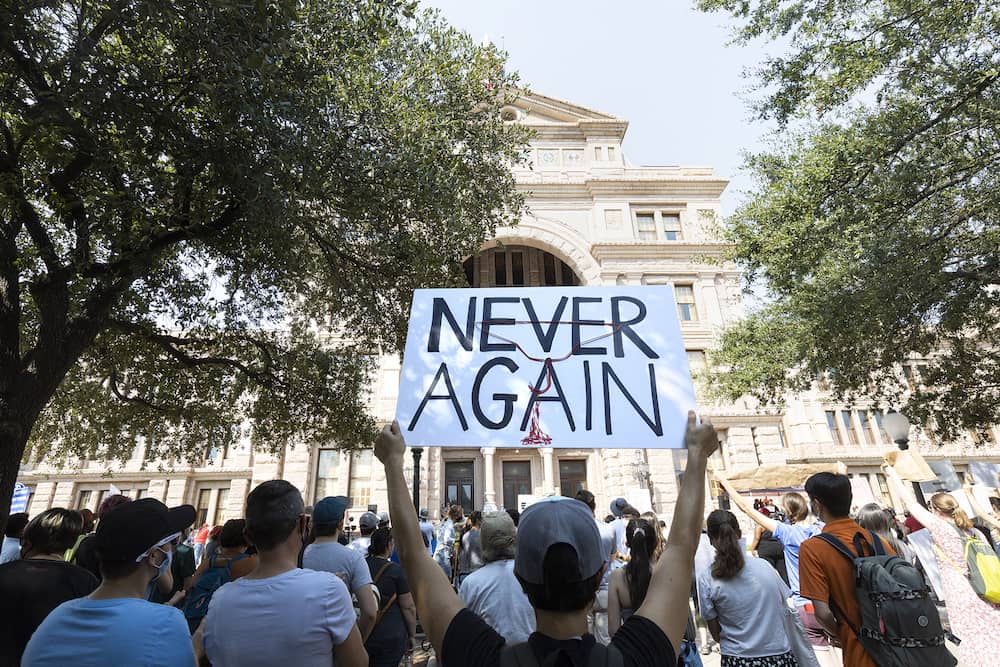 People Vs. State of Texas Rally at the Capitol (Photo by Jana Birchum)

The U.S. Department of Justice has intervened to ask the courts to block the new Texas law that has prohibited most legal abortions in the state, even as Roe v. Wade remains the law of the land.

The DOJ lawsuit filed Thursday, Sept. 9, in federal district court in Austin – expected to be heard by U.S. District Judge Robert Pitman, an Obama appointee – slams Texas for enacting its law “in open defiance of the Constitution” and calls it a “flagrant deprivation of rights.” The Biden administration is asking the court to halt the law, which was drafted to make it difficult for providers and advocates to challenge in court, with a permanent injunction.

“It takes little imagination to discern Texas’ goal – to make it too risky for an abortion clinic to operate in the State, thereby preventing women throughout Texas from exercising their constitutional rights, while simultaneously thwarting judicial review,” the lawsuit reads. Senate Bill 8 – adopted by the Texas Legislature in May and in effect since Sept. 1, after a 5-4 U.S. Supreme Court declined to act to stop it – bars abortion care once embryonic cardiac activity is detected, which is around six weeks, with no exceptions for rape or incest. Since about 80% of women don’t realize they are pregnant at that point – only two weeks after a missed period – SB 8 amounts to a near-total ban.

The 1973 Roe ruling’s protection of the right to abortion care before fetal viability has been upheld many times, including in cases from Texas. (SCOTUS will hear a case later this year where Mississippi has explicitly asked for Roe to be overturned.) In those cases, the state was sued to block its enforcement of anti-choice laws. To get around that, SB 8 empowers any private citizen, anywhere, to sue Texas abortion providers or anyone who “aids or abets” an illegal abortion. Plaintiffs who prevail are guaranteed at least $10,000, creating what’s widely seen as a bounty-hunting scheme that has, for now, brought almost all abortion care in the state to a halt.

“The act is clearly unconstitutional under long standing Supreme Court precedent,” said U.S. Attorney General Merrick Garland as he announced the suit. “This kind of scheme to nullify the Constitution of the United States is one that all Americans, whatever their politics or party, should fear.”

“If it prevails, it may become a model for action in other areas in other states,” said Garland. Indeed, other GOP-led states including Florida, Arkansas, Ohio, and South Dakota have expressed interest in adapting the Texas vigilante scheme; states that have adopted “heartbeat” bans (the first was in 2011) without the private enforcement provision have all seen them blocked in court. President Joe Biden has called the draconian law “un-American” and “an unprecedented assault on a woman’s constitutional rights under Roe v. Wade.”

Abortion rights advocates, who had filed suit in July to challenge SB 8 only to have those court proceedings halted in late August by the 5th U.S. Circuit Court of Appeals, hailed the DOJ lawsuit. “It’s a gamechanger that the Department of Justice has joined the legal battle to restore constitutionally protected abortion access in Texas and disarm vigilantes looking to collect their bounties,” said Nancy Northup, president and CEO of the Center for Reproductive Rights.

“Right now, and every day this law is in effect, patients are being denied access to essential health care,” Northup continued, “and the hardest hit are people of color, those struggling to make ends meet, undocumented immigrants and others with pre-existing obstacles to access healthcare.”