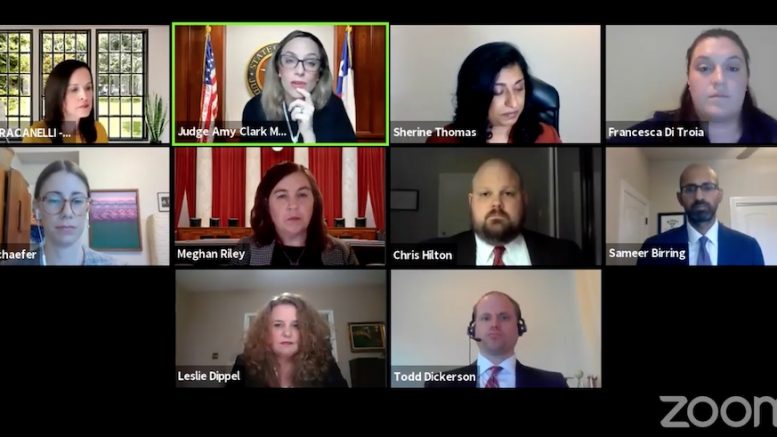 Following a remote hearing before the 201st District Court earlier this afternoon, Judge Amy Clark Meachum ruled that the state didn’t demonstrate a probable right to relief nor imminent and irreparable harm in its challenge over Austin-Travis County orders limiting dine-in food and beverage services between 10:30pm-6am beginning tonight (Dec. 31) and running through this Sunday (Jan. 3) at 6am.

Interim Health Authority Dr. Mark Escott, who was called as a witness by the defendants, testified that the local orders were put in place in an attempt to limit high-risk behavior: gatherings in which people living in separate households are not wearing face masks. He said specific age groups driving the spread of COVID-19 in Austin-Travis County – young adults ages 20-40 – were likely to want to go out late to restaurants and bars during New Year’s Eve, which could further drive spread given the likelihood of protective measures not being practiced.

Furthermore, the attorneys representing the city and county noted that the Texas Attorney’s General Office had not yet pursued legal actions against El Paso County and Bexar County for similar dine-in limitations. However, one lawyer representing the Texas Attorney’s General Office said during today’s hearing that there were plans to file suit “imminently” against El Paso over its dine-in limitations.

In a statement released after Meachum’s ruling, Judge Brown said, “Today’s ruling will help our community slow the spread of COVID-19, while allowing businesses to safely continue their operations through take-out, drive-thru, and delivery service options. I encourage everyone in Travis County to order food for takeout from a local restaurant and to celebrate safely at home tonight.”

Hours after Meachum’s ruling Paxton announced he’d filed an appeal in the Austin-based 3rd Court of Appeals requesting the court temporarily block the local orders by 9pm tonight – less than two hours before the orders are set to take effect.

Editor’s note: This story has been updated since publication to reflect Texas A.G. Ken Paxton’s filing an appeal in the 3rd Court of Appeals.