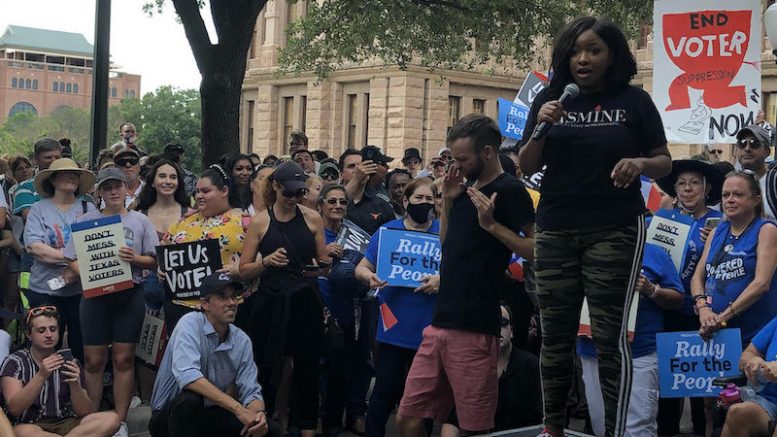 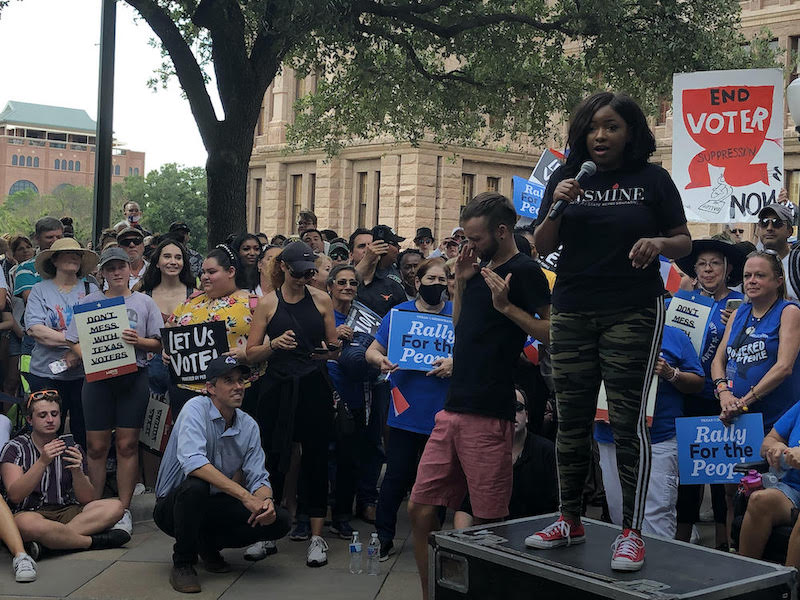 Beto O’Rourke led crowds from across the state to the Texas Capitol on Sunday evening, June 20, where a close-packed group of thousands sweltered, chanted, cheered, and waved signs for hours in support of national voting rights and democracy reform bills.

The rally came three weeks after Democrats in the Texas House broke quorum to scuttle Senate Bill 7, an “election integrity” bill which in its final form proposed draconian measures on voters seeking mail ballots, prohibited voting on Sunday morning in what some saw as an attack on the Black voting tradition of “Souls to the Polls”, and drastically lowered the legal threshold the state could cite to overturn election results. The walkout sent Gov. Greg Abbott into a tizzy; on Friday he vetoed the section of the 2021-23 biennial budget (Article X) that funds the Texas Legislature, and blocked off the Capitol steps on Sunday, forcing O’Rourke’s Powered by People group, which organized the rally as the finale of a 18-city barnstorming tour across the state, to resort to an old-fashioned soapbox.

For the crowd and the dozens of speakers, the Texas House Dems were patriots and heroes, standing up against “Jim Crow 2.0” laws. The walkout has gone viral as part of the current battles over voting rights, a rallying point for activists around the country to demand passage of two pieces of legislation before Congress — the For the People Act (already adopted by the U.S. House as H.R.1, now before the Senate as S.1) and the John Lewis Voting Rights Act, H.R. 4. Both face high hurdles to become law, but the push to make that happen is expected to reach its climax this summer, before Texas and other states can put restrictions into effect for the 2022 elections.

The bills include provisions to mandate automatic, online, and same-day voter registration, increase access to absentee ballots, limit voter ID requirements, and reform redistricting and campaign finance; the John Lewis Act specifically restores “pre-clearance” provisions of the 1965 Voting Rights Act that were struck down by the U.S. Supreme Court in 2015’s Shelby County v. Holder decision. Last week, the leaders of the quorum break joined other Texas Democrats in Washington, D.C. to support the bills, meeting with Vice President Kamala Harris, House Speaker Nancy Pelosi, and Sen. Joe Manchin, D-W.Va., a centrist holdout on the bill. Back in Austin, they rallied the crowd.

Recalling the tense lead-up to the walkout, “I said, ‘It’s become evident that [state GOP leaders] are actually just terrorizing us. I’m not talking and negotiating with terrorists. It’s time to get walking.’ And that’s what we did,” said freshman Rep. Jasmine Crockett, D-Dallas. “There’s going to be a movement in this country because of the work that we do.” At the other end of the historical timeline, a surprise guest speaker was Luci Baines Johnson, who recalled watching her father signed the Voting Rights Act into law. “Today, I can’t be with my father, who is in heaven I firmly believe, but I know that he is up there applauding every one of you for being here, and especially applauding the Texas legislators who stood up for democracy,” she said.

In addition to calls for attendees to register voters, volunteer as election and campaign workers, and pressure Congress to back S.1 and H.R.4, speakers also drew the crowd’s attention to the looming special session this fall where Abbott has promised to get some version of “election integrity” passed to please the GOP primary voters he’ll face next year. However, O’Rourke, who’s publicly entertaining running against Abbott (as Sunday’s cheering crowd encouraged him to do), expressed support for Texas Democrats to walk out again if needed,. “These lawmakers have to do whatever it takes to save democracy. It is literally existential here in Texas,” O’Rourke said. “If, for example, SB 7 or some other version of that bill passes, and gives the state of Texas the right to overturn future elections, we will no longer have a democracy.”

Attendees included Dallas native Lorna Ramsey, who marked Fathers Day with her husband James protesting on the Capitol lawn. Ramsey, who said she’s been been involved in activism since she rallied the student body at her integrated high school to protest their graduation speaker, the pastor of a segregationist church, said she saw it as a duty to come and protest. “There are people who are fighting on the battleground for our democracy. The least we can do is be here,” Ramsey said. “In my family, [voting] is sacred. It is. So to see someone try to take away the vote — what they’re doing is not going to stop people. It’s just gonna make us fight harder.”