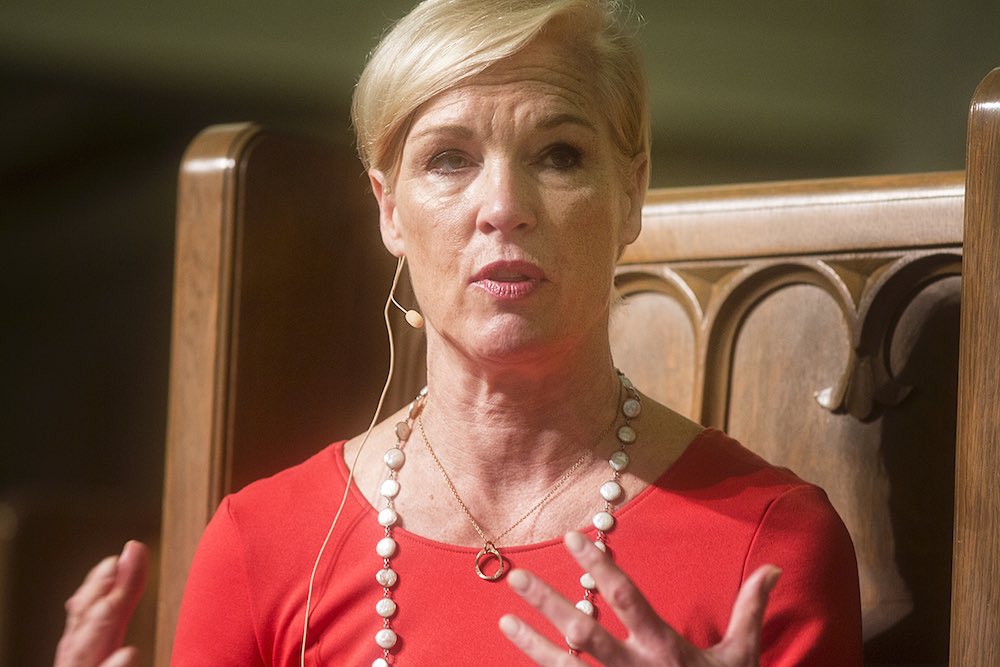 Cecile Richards at the 2018 Texas Book Festival. The former Planned Parenthood CEO and reproductive rights activist will be part of the SXSW 2023 speaker lineup. (Photo by Jana Birchum)

Start putting your 2023 calendar together: SXSW has just announced the first speakers for its 37th annual conference, running March 10-19.

The lineup is the first taste of the massive number of speakers and panels the festival always provides, in fields from film to music, politics to tech, food to cannabis, and more.

“At SXSW, our goal is to always host a range of speakers who represent the full spectrum of the
creative industries that converge in Austin every March,” said Hugh Forrest, Chief Programming Officer. “Our initial group of Featured Speakers, which includes futurists like Amy Webb, lifelong activists and advocates such as (Center for Democracy & Technology CEO and President) Alexandra Reeve Givens and (former Planned Parenthood Federation of America president) Cecile Richards, and athletic titan turned business leader Allyson Felix, marks a significant first step towards a phenomenal SXSW 2023.”

Badges and further info are available now at sxsw.com.

Also, make sure to follow all our coverage at austinchronicle.com/sxsw.

• CEO and Chief Futurist at Signal And Cipher Ian Beacraft


• 2050: Digital Identity is a Human Right: As we become more and more digital as a species, it’s critical that we don’t forget about our human rights. Something as simple as owning your identity becomes a complicated issue in the digital realm of the metaverse, web3 and web5. But in an interconnected digital world, how can we be sure that our Digital Identities won’t be data mined, duplicated, or stolen? In this session, join Senior Vice President at Unstoppable Domains Sandy Carter as she draws on her decades of experience being on the cutting edge to imagine a future where Digital Identity is seen as a Human Right.

• Data Privacy After Roe v. Wade: The overturning of Roe v. Wade is a watershed moment for the privacy of people seeking reproductive care. A person’s browser history, search history, location, and private messages can now be used by law enforcement or private citizens to pursue people who are suspected of having or aiding an abortion. When people’s most private digital information can be used against them, can tech companies change their practices to better protect their users’ privacy? Plus, as some states try to outlaw websites that tell people how to access abortion care, can advocates ensure that reliable health information remains online? In this session, join co-founder of Supermajority, New York Times bestselling author, and former President and CEO of the Planned Parenthood Federation of America and the Planned Parenthood Action Fund Cecile Richards, President and CEO of the Center for Democracy & Technology Alexandra Reeve Givens, and CEO of The Markup Nabiha Syed for a discussion on ways advocates are working to protect users’ privacy and access to information at this critical moment for reproductive rights.

• Design for a Better Future: In this session, dare to imagine a future where we can hack our bodies, make energy available to every human, create schools for lifelong learning, feed astronauts on their way to Mars, and make disabilities a thing of the past. Through unexpected designs and storytelling, co-founder and Owner of Nonfiction Mardis Bagley and Partner and Creative Director at Nonfiction Phnam Bagley will walk you through the possibilities of unbound imagination, and what it really takes to turn science fiction into reality.

• RTR 2023: The Neuroscience of Self-Renewal: Modern neuroscience tells us how we store and process information depends upon our emotional state, which easily triggers the “flight or fight” response. Technologies that are designed to empower our understanding of events at hand, as well as to respond quickly, ultimately depend upon our personal fortitude. In this session, join Chief Technology Officer of Everbridge John Maeda as he discusses inevitable failures and how the likelihood of either overcoming a calamity or getting overcome by it correlates to our confidence in self-renewal.