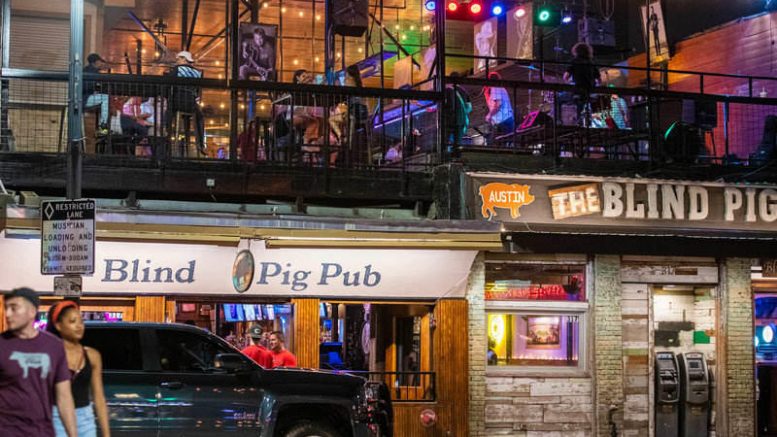 A band plays on the upstairs patio stage of the Blind Pig Pub on East Sixth Street on the first official night of re-opening (May 22, 2020) (Photo by David Brendan Hall)

The Texas Alcoholic Beverage Commission (TABC), on August 25, approved new rules making it easier for bars to get a Food & Beverage certification. Bars have been shut down since June 26, via executive order by Gov. Greg Abbott, while restaurants have been able to remain open at a 50 percent capacity.

TABC Public Information officer Chris Porter, told the Chronicle on Tuesday that since June’s closure, 700 bars have applied for a Food & Beverage variance and about 550 have been able to change designation.

“Because the Governor’s executive order requires businesses who derive more than half of their income from the sale of alcohol to remain closed, what these folks are doing is reporting to TABC that their alcohol sales are below that 51 percent threshold,” Porter explained. “There are a couple different ways of doing that: You can send TABC an affidavit showing what your alcohol sales have been over the last few months, or what most people are doing is applying for a food and beverage certificate, which is normally given to restaurants. When they submit that application, they are submitting a projection of their future sales that show that they expect to make less than half their income from the sale of alcohol.”

Porter acknowledged that bars partnering with food trucks will emerge as a key factor in getting Food & Beverage designation.

“First the food truck needs to be located on the premises of the business. In a lot of cases, that might be a parking lot. Additionally, there needs to be some sort of arrangement between the food truck owner and the bar owner showing a daily record of the sales of the food truck, basically showing that the combined premises brings in less than 51 percent of its revenue from on-premise alcohol sales. Then finally, and really one of the most important things is the food truck must be in operation for the entire amount of time alcohol is being sold. As soon as you close that food truck, as soon as you stop selling food, you are essentially a bar and not able to operate under the executive order.”

“I’m totally ready to argue the point that Blind Pig possibly will sell more pizza than it will alcohol. At the end of sixth months we’ll be able to look back at that data and see if it was correct, but through that idea, I’m allowed to do this.” – Bob Woody, prominent Austin nightclub owner and board member of Texas Bar and Nightclub Alliance (TBNA)

Asked how that balance of food to alcohol sales will be paroled by the agency, Porter said:

“First of all, if we issue one of these certificates to a bar who chooses to change and operate as a restaurant, if we receive complaints from members of the public or from law enforcement or from anybody stating that this location is, in fact, still operating as a bar and not abiding by the requirements of the Food & Beverage certificate, we’ll immediately conduct and audit or an inspection with our enforcement agents to find out and if there is, in fact, a violation,” he offered. “Otherwise we do regularly visit locations to ensure they are abiding by the sales percentage of their permit type. In most cases that is done, generally once during the permit cycle, which lasts for two years, and, as we move forward, during this situation with the changes happening and with more bars choosing to operate this way, we’re going to be visiting these folks earlier than usual, within a few weeks of them making the switch.”

Bob Woody says that he “helped come up with rules” for TABC’s amendment, via his association the Texas Bar and Nightclub Alliance (TBNA). He told the Chronicle that TABC officials reached out to him for guidelines that his members would feel comfortable with.

“What I pushed was, if you had the equivalent of catered food, it’s legal,” Woody claims. “So I said if we had catered food from a legitimate restaurant that had a food permit and we had that product brought in and it was made available to purchase, would that not be the same as if we had a kitchen operating? The answer is yes – it is the same.”

Woody points out that the health department isn’t going allow operators to make tacos at home and bring them in for sale on premise, but points to the pre-packaged food at HEB as an example of food that bars can sell: “It’s prepared in a legal kitchen so we can actually go buy stuff, take it the bar and sell it, and now we’re operating correctly.” 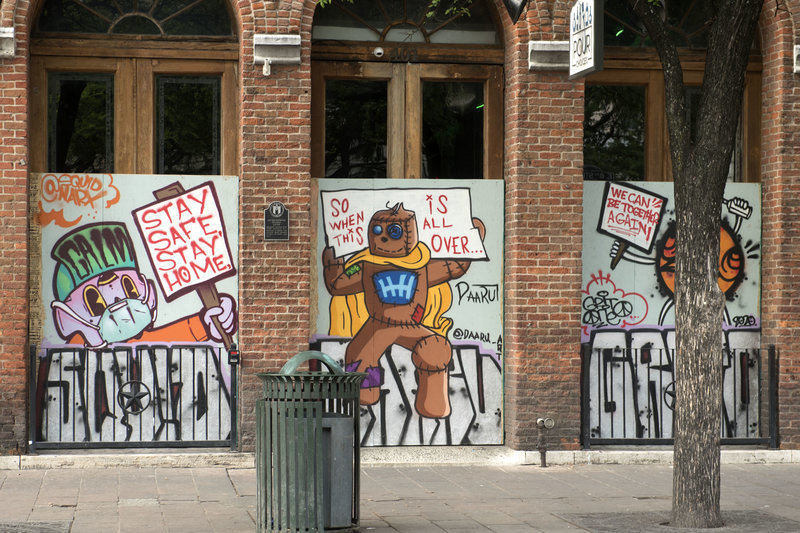 Graffitti over boarded up windows on Sixth Street during the first day of a “Shelter in Place” order on March 25, 2020 during the COVID-19 pandemic. (Photo by John Anderson)

Indeed, the language on TABC’s emergency amendment to rule 33.5 does seem to edit the definition of “food service” to include pre-packaged if it’s purchased off premise.

Woody – whose stance on Texas’ response to COVID-19 has been made clear by his TBNA suing the state over the shutdown, owning one of the bars that was cited by TABC for not following social distancing guidelines in June, and telling the Chronicle that “the cure is truly worse than the virus itself” in regards to the economic impact of closing bars – says he’s currently selling pizza at the Blind Pig, while Buford’s has a taco truck. Asked how he knows that those food options will account for 51 percent of on-promise says, he says, “You won’t know until you do it.”

“It’s speculative and everyone hates to speculate, but honestly if you just say you can’t, you’re kind of shooting yourself in the food up front,” he reasons. “You have to say, ‘I’m gonna make my best effort’ and, as we get through this, creative things will happen that will show me direction on how to accomplish this.”

“Until you’ve created data, you can’t be judged,” adds Woody. “We speculate on numbers always when we first apply for a liquor license and it says ‘what do you estimate your sales to be?’ So anyone who is doing this needs to estimate that their sales will be greater in food than it will be in alcohol. It’s just an estimate and if it’s incorrect, it’s incorrect. Really what this does is allow them the opportunity to do what they’re trying to, which is get open with some food sales. I’m totally ready to argue the point that Blind Pig possibly will sell more pizza than it will alcohol. At the end of sixth months we’ll be able to look back at that data and see if it was correct, but through that idea, I’m allowed to do this.”

Joe Monastero, Chief Strategy & Operations Officer for the Texas Restaurant Association, is grateful that TABC has offered new guidelines regarding the Food & Beverage variance because he believes it will help out bar owners who were close to throwing in the towel. At the same time, he cautions bar owners to keep safety in mind.

“There’s concern in that there’s been only a 3 percent violation rate on restaurants operating during the COVID pandemic, reported back to us by TABC. When you consider there were 50,000 restaurants in Texas before this began, now add in the 5,300 bars and whatever percentage of them might reopen using this opportunity operating under the restaurant protocols, we just need everyone – both operators as well as their customers – to follow to the letter what the protocols have so we can continue to move forward,” Monastero explains. “We want everyone to wear face coverings except when at the table and for the staff to wear masks and for customers to be seated away from each other. When that doesn’t happen, the bad actors get a lot of attention.”

“We just need everyone – both operators as well as their customers – to follow to the letter what the protocols have so we can continue to move forward,” Joe Monastero, Chief Strategy & Operations Officer of Texas Restaurant Association

Monastero notes that bars reclassifying as restaurants isn’t a silver bullet solution for everyone to reopen.

“The governor’s executive order for shutting down bars is still in place. This is saying that if you’re a place that already has a kitchen, or has an ability to do food and has a layout that’s conducive to people being seated and have food with their drink, then here’s an option for you,” he says.

Asked to react to TABC’s changing guidelines, a representative for the City of Austin Public Health emailed the Chronicle this statement:

“Regardless of the adjustments by TABC, we continue to encourage our community to follow protective actions to prevent the spread of COVID-19 in our community. These actions include avoiding non-household gatherings, wearing a mask and social distancing when in public, and practicing proper hygiene. Additionally, Austin Public Health has risk-based guidelines that establish recommendations for personal behavior. Based on these guidelines, our community is currently in Stage 3, which means higher-risk individuals (those over the age of 65 and those who have chronic medical conditions) should avoid non-essential travel, dining and shopping. Everyone, regardless of risk, should avoid social gatherings and any gatherings greater than 10 people.”