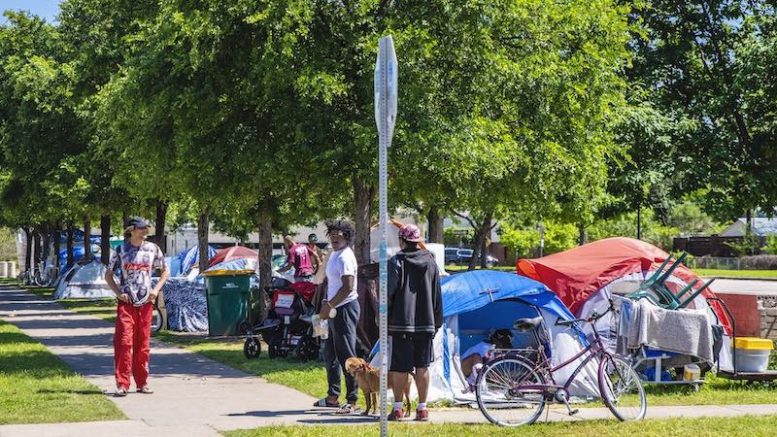 An effort mounted by conservative groups to effectively re-criminalize homelessness in Austin has failed. The petition filed by Save Austin Now, a group led by Travis County Republican Party Chair Matt Mackowiak, did not meet the 20,000-signatures threshold required by city charter and state law to put the initiative on the November ballot.

The petition would have put before voters a measure reinstating bans on camping, sitting, and lying in public, as well as a prohibition on panhandling. But with the clerk’s announcement, that is no longer a possibility. Homelessness will remain decriminalized in Austin.

The group only submitted 24,598 signatures, which was the lowest number of any recently filed citizen-led petition. In an August 5 memo to City Council, City Clerk Jannette Goodall wrote, “The probability that checking all 24,201 submitted signatures would find a total of at least 20,000 valid signatures is less than 3 in one billion. Therefore, the confidence is nearly 100% that the petition contains fewer than 20,000 valid signatures.

Under the Texas Election Code, the clerk is allowed to analyze a random sampling of signatures to verify if a petition reaches the required number of signatures before going on a citywide ballot. Goodall analyzed 6,051 signatures and found that 1,147 of them were disqualified; 41 of those were duplicate signatures and 1,106 were disqualified for “other reasons.” A city spokesperson says that “other reasons” include a person who signed the petition not being a registered voter in Austin, a signature missing from the form, or a date could have been missing.

Based on the clerk’s statistical analysis, which Goodall writes has been used since 2002, only 19,122 signatures were verified. The memo also confirmed that 145 people contacted the clerk’s office to have their name removed from the petition; of those, the clerk was able to locate and remove 96 signatures.

The memo also says that 397 signatures were eliminated because they were signed under a petition using alternate wording – perhaps a casualty of the flimsy sign-by-mail process SAN utilized to gather signatures as stay-home recommendations stemming from the spread of COVID-19 became more strict.

Marina Roberts, who spent days sweating in the heat counter-canvassing during early voting as SAN petitioners spread misinformation about what the petition would do, said, “Save Austin Now played dirty and they played to win, but even after lying, cheating, manipulating, and fear mongering their way across the finish line, their efforts and $150,000 campaign have amounted to nothing.” Roberts added, “Austinites can now come together and focus our efforts on the pursuit of housing justice, without distracting efforts waging war on homeless people rather than homelessness.”

City Council voted in June of last year to change three city ordinances that criminalized unavoidable behaviors associated with homelessness. Restrictions on where unhoused people could camp, sit, or lie were loosened, and a ban on panhandling was changed to prohibit “aggressive solicitation.”

Ever since, conservatives from the local level all the way up to the Governor’s mansion have targeted the ordinances for repeal. The SAN petition effort represents the largest – and most expensive – effort to date at overturning the three ordinance changes. Petition organizers with Save Austin Now could not be reached for comment. But advocates for the unhoused celebrated the announcement.