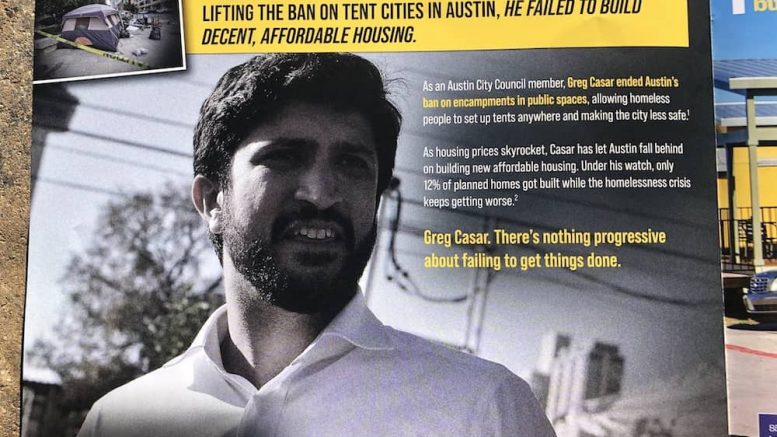 A political advertisement mailed to voters by the Eddie For Texas Congressional campaign has prompted backlash among progressives, including 12 Democratic elected officials who signed an open letter to Eddie Rodriguez, asking him to “cease using Republican-style campaign tactics.”

Rodriguez, who currently represents District 51 in the Texas House of Representatives, is one of four candidates vying for the Democratic nomination in the TX-35 primary. An open letter from a dozen elected Democratics expressed dismay at the mailer’s messaging about “the poor and unhoused” and its “Gov. Greg Abbott-style approach to campaigning”

“Democrats should not blame the poor and unhoused for their challenges, and we should instead work toward a bold vision of affordable housing for all,” the letter reads. “In 2021, the Travis County Democratic Party and other Central Texas Democrats stood firmly against the Republican effort to attack unhoused residents in Austin.”

Prominent signers of the letter include Travis County’s top two prosecutors, District Attorney José Garza and County Attorney Delia Garza; two of Rodriguez’s colleagues in the Texas House of Representatives, Reps. James Talarico, D-Round Rock, and Erin Zweiner, D-Driftwood; as well as City Council Members in Austin (Natasha Harper-Madison and Chito Vela) and San Antonio (Teri Castillo and Jalen McKee-Rodriguez). Many of the signers would be considered Casar supporters; and some, like José Garza, Delia Garza, Castillo, and McKee-Rodriguez have officially endorsed the campaign. 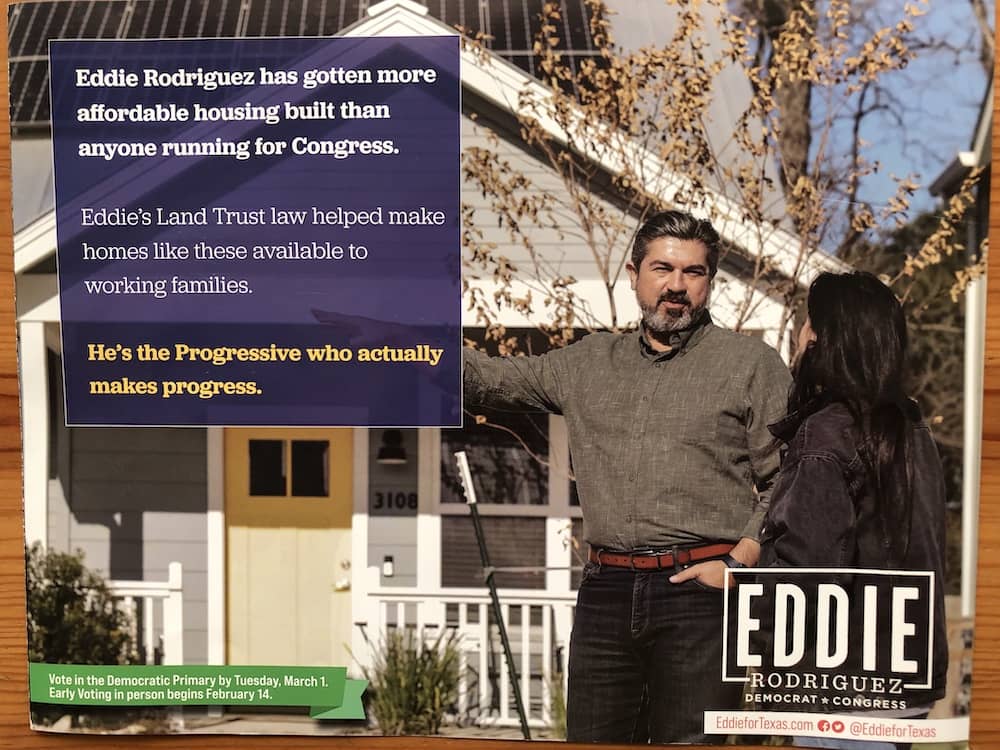 Page one of the Eddie for Texas mailer

The four-page booklet, received by voters in Austin and San Antonio, leads with a photo of Rodriguez standing in front of a single-family home with text promoting a law he helped pass through the Texas Legislature that allowed cities to set up homestead preservation districts. HPDs are aimed at helping to build new affordable housing and keep incumbent homeowners facing displacement in their current homes through the use of land banks, land trusts, and tax increment financing; since the law passed in 2005, the City of Austin has set up one HPD in East Austin. A bill authored by Rodriguez that would help city officials create more HPDs was vetoed by Gov. Greg Abbott in 2017.

The front page of the mailer concludes with a key campaign message from Rodriguez: “He’s the Progressive who actually makes progress.” But when the cover page is flipped open, voters will see a decidedly more toxic message. A large, darkened portrait of Austin City Council Member Greg Casar – Rodriguez’s leading opponent in the Democratic primary for TX 35 – with a banner reading: “Greg Casar not only designed the disastrous ordinance lifting the ban on tent cities in Austin, he failed to build decent, affordable housing.” (Emphasis included in the mailer.)

The messaging of Rodriguez’s political ad has taken Dems by surprise for a number of reasons, not least of which is that the TX-35 battle thus far has been a race to convince voters who is the true progressive among the field of four. Despite its ultimate defeat two years later by Austin voters who supported Prop B in May 2021, Council’s effort to decriminalize homelesness – by amending the city’s public camping, no sit/lie, and panhandling ordinances – was adopted via a 9-2 City Council vote and widely supported by progressive groups. Rodriguez did vote against HB 1925, a bipartisan bill that passed through the 87th Legislative Session, enacting a statewide prohibition on camping, but the language the Eddie for Texas campaign chose for this piece of mail (“disastrous ordinance” and “tent cities”), on the other hand, feels closer to the kind of attacks lobbed at the decriminalization effort by right-wing group Save Austin Now and their allies at the Texas Capitol. (For example, in a Jan. 27, 2021 story, SAN co-founder Matt Mackowiak told the Texas Tribune, “the camping ordinance has been a disaster for the city and it’s been bad for the homeless.”) 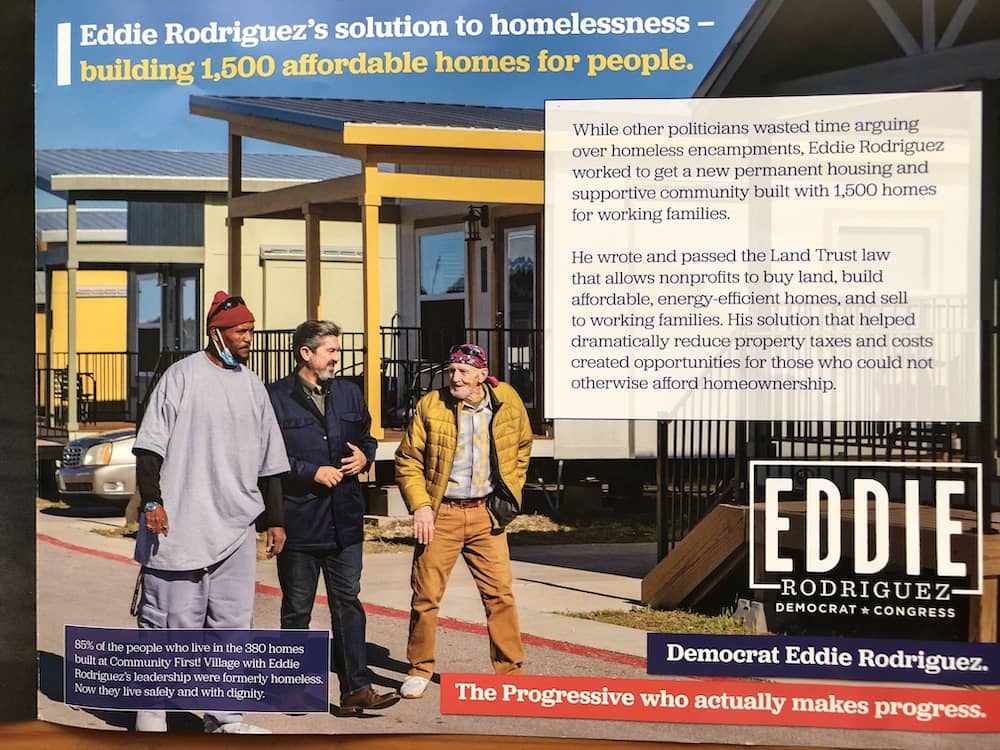 Page three of the Eddie for Texas mailer

But more to the point, Council’s effort to decriminalize homelessness was only considered “disastrous” by people inconvenienced or made to feel unsafe by the presence of people sleeping in tents because they had nowhere else to go. For the people without homes who were suddenly allowed to sleep in safer, more accessible public spaces, the easing of rules around public camping were viewed as relief given to a hard and dangerous existence. Camping in public spaces allowed unhoused people to live near public transportation, jobs, healthcare, and other services; most importantly for those engaging in case management to exit homelessness, though, was the newfound permanence of their residency. That allowed case managers and social workers to easily find them and connect them to life-saving healthcare, rides to job interviews, or just delivery of essential supplies.

The assertion that Casar “failed to build decent, affordable housing” also strains credulity. Over his seven years as a Council Member, Casar earned a reputation as one of the most reliable pro-housing votes on the dais. In 2018, he led the charge on Council to place the historic $250 million housing bond on the ballot that November, which went on to win approval from Austin voters. The following year, he crafted a density bonus program known as Affordability Unlocked that quickly became a critical policy in the affordable housing developer’s tool box. In 2020, he worked publicly and behind the scenes to pave the way for a permanent supportive housing development in North Austin that will eventually produce around 170 units for people exiting homelessness. Page four of the Eddie for Texas mailer

The third page of the mailer has a picture of Rodriguez at Community First! Village, the semi-rural compound outside the city limits for people experiencing homelessness that was made possible, in part, by a tax exemption Rodriguez helped pass through the Legislature in 2010. The next-and-final page of the mailer contains a picture of a tent on the streets of Austin with a message reading, “this is Greg Casar’s failed answer to the homeless crisis.” Again, words more likely to come out of the mouth of SAN co-founder and Travis County Republican Party chair Matt Mackowiak than the progressive elected officials who defended Council’s decision to decriminalize homelessness.

When asked for comment about the language used in the mailer and the backlash to it, a representative from Rodriguez’s campaign sent the following statement: “Democratic primary voters support Eddie Rodriguez because he is the progressive who makes progress. He has the strongest record of progressive accomplishments – achieving the most affordable housing and supportive housing for the homeless, bringing in billions of funds for our public schools, and protecting our precious civil rights.”