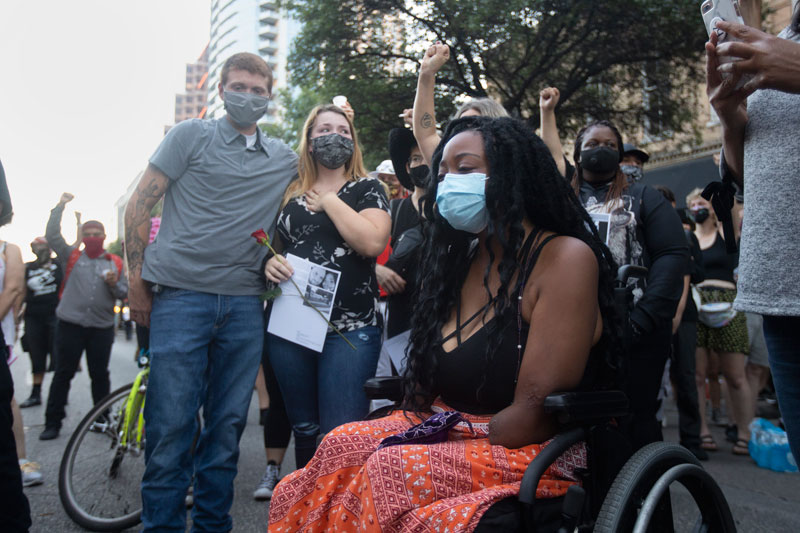 Black Lives Matter activists are demanding that Interim Police Chief Joe Chacon discipline an Austin Police officer who they say dumped activist Whitney Mitchell, a quadruple amputee, out of her wheelchair and onto the street during a protest on March 29.

Video of the incident, posted on social media, shows Mitchell furiously struggling after police arrest her caretaker, Danielle Reichman, beside a parked police car on Congress Avenue. The officer, tentatively identified as Brian Yarger, begins pushing Mitchell toward the sidewalk. She drops onto her back in the wheelchair, unable to bring herself into a sitting position. Then, as the officer brings the chair to a stop, she falls out or is carried out by momentum. The officer leaves the wheelchair sitting in the street, seems to shrug, and returns to the police car.

Chacon told reporters on Tuesday that he’s seen the video: “I have seen the incident in question. I’ve spoken with the area Commander and we are doing a review of such types of incidents, use of force, response to the community, and how we handled it to ensure policies were followed.”

The episode occurred at the end of a five-hour march organized to protest the killings of Alex Gonzales Jr. (on Jan. 5) and Mike Ramos (last year) by Austin Police officers, and of the man Mitchell had planned to marry, Garrett Foster, last July by U.S. Army Sgt. Daniel Perry. After visiting the Southeast Austin sites of the killings of Gonzales and Ramos, protesters marched Downtown to where Foster was gunned down by Perry. As they paused at Foster’s memorial at 4th and Congress, they momentarily left a banner reading “Justice for Garrett Foster” – precious to Mitchell – sitting in a large planter, meaning to retrieve it.

Video from the Tribune of the People news site shows an officer taking the banner and walking away. Mitchell, pushed by Reichman and accompanied by other protesters, follows them to a police car, screaming at officers to return it. The officers refuse and tell the protesters that if they don’t return to the sidewalk they’ll be arrested. Mitchell refuses to do so and Reichman stays by her side, placing her arms protectively over her. An officer bends Reichman’s arms back and places handcuffs on her wrists. Yarger then wheels Mitchell to the curb, where she falls into the street.

“It’s well-known to anybody who’s been trained in any sort of disability rights – you treat a person’s wheelchair as if it’s a part of their body.” – Angelica Cogliano, Whitney Mitchell’s attorney

Reichman was taken to jail for a Class C misdemeanor – reportedly, Failure to Obey a Lawful Order. After her release, she described the arrest on social media, “[The police officer] demanded that I take orders from him and move her – I laughed in his face and said I only listen to Whitney and will be staying with her if she is not ready to move.” Mitchell said the dispute was precipitated by the officers’ refusal to return the banner. “All I wanted was the banner back, to get it back. And he was saying I wasn’t speaking to him respectfully and it just kept going back and forth. [I]t’s really hard to talk about and it’s all at the same site where Garrett was murdered.”

Foster’s killing was the most dramatic moment in a summer full of them for BLM protesters last year. He and Mitchell had been fixtures of the weekly – at times, nightly – marches through Downtown during June and July. Then, on July 25, Perry, an active-duty sergeant stationed at Fort Hood, drove his car aggressively into protesters as they marched at Congress and 4th Street. He stopped in front of Mitchell and Foster, who was wearing the AK-47 he openly carried at the demonstrations. Perry shot Foster to death in front of Mitchell, later telling police that Foster had raised the barrel of his gun at him, which many witnesses at the scene have disputed. Police let Perry go and he has remained unindicted.

Mitchell’s attorney, Angelica Cogliano, confirmed reports that Travis County District Attorney José Garza will present Foster’s killing to a grand jury next month. She and her client are refraining from publicly discussing any plans for action regarding Yarger or his fellow officers at this time because Mitchell would prefer that the focus remain on getting justice for her late fiancé. However, Cogliano stressed that Yarger’s actions were inappropriate, disrespectful, and resulted in Mitchell falling out of her chair in the same location where she experienced a horrific trauma. “It’s well-known to anybody who’s been trained in any sort of disability rights – you treat a person’s wheelchair as if it’s a part of their body. They consider it a part of their body. And a law enforcement officer cannot pick up and move somebody who is not being detained or arrested.”

Editor’s note: This article’s headline originally described Whitney Mitchell as quadriplegic; she is a quadruple amputee. The Chronicle regrets the error.