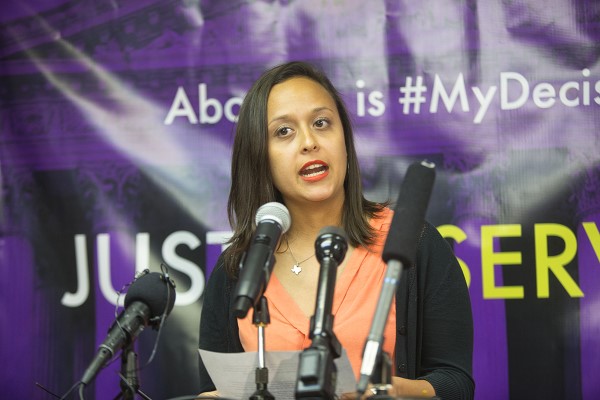 Three abortion support organizations – The Lilith Fund, the Texas Equal Access Fund, and The Afiya Center – are hitting back at anti-choice activist Mark Lee Dickson and the group he leads, Right to Life East Texas.

Those two are now the defendants in a defamation lawsuit, after labeling the pro-choice groups “criminal” and spewing lies about abortion care to – in their eyes – purposely “confuse, intimidate, and dissuade” abortion-seeking women in Texas. Dickson and Right to Life are behind the string of abortion bans passed recently by small Texas towns, many of which were also sued earlier this year by the ACLU of Texas.

“With this lawsuit, we are saying enough is enough,” said Marsha Jones, executive director of the Afiya Center, a reproductive justice group that addresses the health disparities black women and girls face. “We have been at the hands of those seeking to distort our purpose by damaging our standing in the community. Going after organizations like ours will not stop us from helping black folk; it will only cause confusion in our communities and create barriers to people seeking abortion care. The women that we serve have already been marginalized and disenfranchised and we are saying enough already. To be labeled as a ‘criminal entity’ presents a clear and present danger to the life of this organization.”

Last June, Dickson and Right to Life East Texas successfully lobbied the small town of Waskom, near the Louisiana border, to ban abortion and declare itself a “sanctuary city for the unborn,” the first of 12 small communities to do so. While those ordinances can’t take effect as Roe v. Wade is still law, they weren’t just about (symbolically) halting abortion care. The ordinances also barred reproductive rights organizations, including the three plaintiffs in the latest suit, from operating within those cities’ boundaries, deeming them “criminal” enterprises who are assisting with murder with “malice afterthought.”

The three plaintiff groups provide direct financial assistance to women who want to end pregnancies but can’t afford the full cost, made unnecessarily expensive by Texas’s long list of abortion restrictions. They also advocate and educate people in Texas about reproductive rights and access, seeking to reduce abortion stigma. With abortion bans and their accompanying propaganda and falsehoods sweeping East Texas, that education work became even more vital.

In February, the ACLU of Texas, representing the Texas Equal Access Fund and the Lilith Fund, filed suit against seven towns that passed the ordinance, arguing they violated pro-choice advocates’ First Amendment rights. By ideologically designating those groups as criminal entities, the towns are illegally imposing punishment without a fair trial, they argued. By May, the ACLU dropped the lawsuit after the cities backed down and revised ordinance language to stop calling such groups “criminal.”

Even with that partial victory, the plaintiffs believe a lot of damage is already done. They want to make sure Dickson and Right to Life East Texas are held accountable for disrupting and confusing communities who have a right to abortion care. Though the cities themselves have amended their ordinances, Dickson and his group continue in defamatory conduct as they “refuse to stop lying and refuse to correct the false record,” attorneys write in legal challenges filed today. (Afiya and TEA have filed suit in Dallas County while the Lilith Fund filed in Travis County district court.)

“The Lilith Fund has been defamed because Defendants have falsely accused it of assisting in the commission of the specific crime of murder,” the suit reads. “Ultimately, defamation is the purpose of the ordinance; Dickson’s campaign is designed to confuse people about the legal status of abortion and abortion advocacy, and paint abortion rights organizations like the Lilith Fund as criminals.”

Dickson and his group hopped around City Council meetings in towns like Gilmer and Naples accusing pro-choice groups of “aiding and abetting literal murder,” the suit says. The groups argue the anti-choice activists “maligned” them in order to intentionally damage and impede their work. Labeling them “criminal organizations” injured their reputations and the lies told during meetings and in the ordinances made it difficult for women to access truthful and legal information about abortion care.

“Serving our communities is at the heart of everything abortion funds do, and that’s exactly why we’re bringing this lawsuit today,” said Amanda Williams, executive director of the Lilith Fund. “There’s nothing criminal about helping people access essential health care with love and compassion. We’ve been there for our communities through every attack in the book and we are here for them now. We won’t let extremists disparage us or punish our clients for seeking abortion care.”