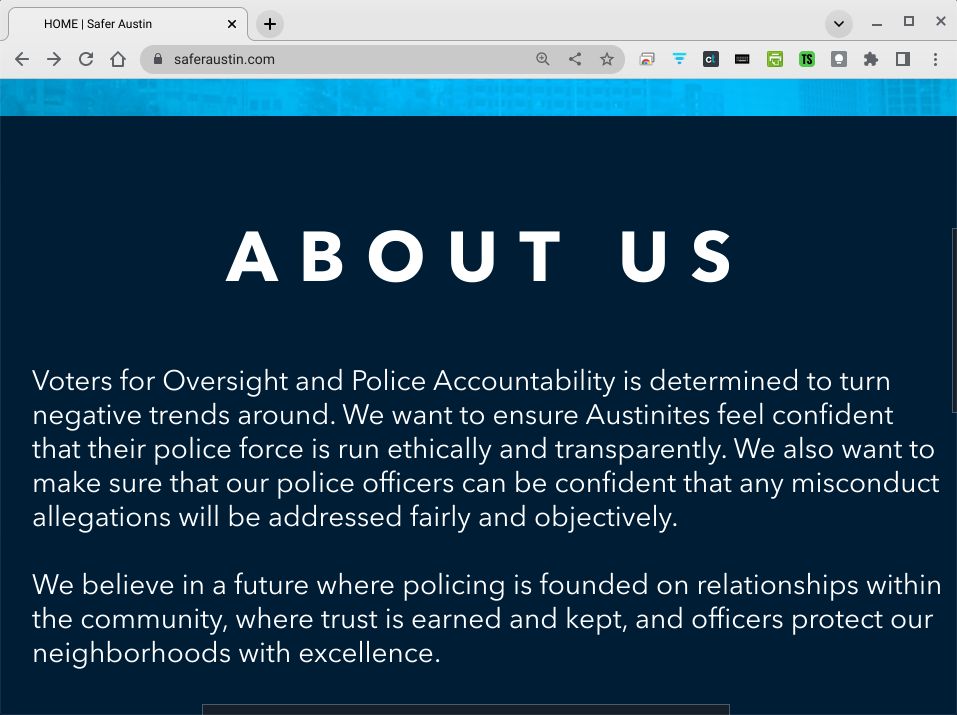 The SaferAustin.com website describes the work of “Voters for Oversight and Police Accountability,” but the fine print says it’s run by the Austin Police Association PAC.

A mysterious group has launched a deceptive petition campaign that could result in a second police oversight ordinance appearing before voters on the May 6, 2023 ballot.

Equity Action is the coalition formed by local justice advocates to campaign against GOP and police-union front group Save Austin Now’s 2021 citizen initiative to force increases in Austin police funding. It led a successful petition drive earlier this year to get its own Austin Police Oversight Act on the May ballot. If approved by voters, the APOA would transform how civilian oversight of the Austin Police Department is constructed – and prevent oversight from being used as a bargaining chip in contract negotiations between the city and the Austin Police Association.

But canvassers falsely claiming to work for Equity Action are collecting petition signatures for a different oversight ordinance, also called the Austin Police Oversight Act, claiming it is similar to or an update of the first one. The faux-APOA is actually much different – and “significantly weaker” according to a press release issued by Equity Action.

“While this petition shares the same name as ours, it will establish a powerless and ineffective oversight system that is worse than the current system our ordinance seeks to strengthen,” Rebecca Webber, Equity Action’s treasurer, said in the release. “We’re here raising the alarms today not just because someone is posing as us, but because we believe that if Austinites understood what this measure actually proposed, no one would sign the petition.”

A redlined version of the faux-APOA ordinance which (the real) Equity Action shared with reporters highlights some of the critical differences. The new ordinance would eliminate a person’s ability to file anonymous complaints with the Office of Police Oversight; it allows APD to maintain what’s known by insiders as a “G file,” often described as a “black box” where police misconduct records are kept hidden from the public; and it would retain the 180-day limit after incidents beyond which the police chief cannot discipline officers for misconduct (the APOA increases the timeframe to 365 days).

The faux-APOA also eliminates what may be the most important provision of the original: Its mandate that “the City Council shall not recommend or approve any contract or agreement … unless such contract or agreement is consistent with and fulfills” the criteria laid out in the ordinance. This is to, once and for all, take civilian oversight of APD off the table as something that must be negotiated with the police union, as it has been until now.

Despite these key deviations, the canvassers for the faux-APOA have told potential signers that their ordinance is basically the same – in addition to falsely claiming to be working for Equity Action. Several people who contacted the Chronicle after signing the petition said they felt misled. But campaigns pay canvassers a few bucks for every signature they collect and typically they’re people in desperate need for cash. As we reported in 2021 when Save Austin Now ran its petition campaigns, petitioners were either misled by SAN organizers or not adequately trained, which resulted in deceptive petition pitches to voters.

It remains unclear who has organized the faux-APOA petition drive, but the police union appears to be involved in this larger campaign. Recordings of conversations between petitioners and signers, as well as interviews we conducted with people who interacted with petitioners, reveal three important names: Safer Austin, Voters for Oversight and Police Accountability, and Trenton Pool.

Two people told us that canvassers told them they were working for a group called Safer Austin. That group’s webpage, www.SaferAustin.com, is pretty sparse; the domain was registered Feb. 2, 2021, using a “domain by proxy” service based in Arizona which allows people to create websites anonymously. In its press release, Equity Action claimed a canvasser for the faux-APOA gave out the www.EquityAction.org URL to learn more about the ordinance – a domain that appears to be registered using the same anonymizing service as SaferAustin, and which takes you to a GoDaddy parking page. (The real group is at equityactionatx.org. >

SaferAustin.com’s single “About Us” page describes the work of a group called Voters for Oversight and Police Accountability. “We want to ensure Austinites feel confident that their police force is run ethically and transparently,” the first of the two paragraphs on the page reads. “We also want to make sure that our police officers can be confident that any misconduct allegations will be addressed fairly and objectively.” VOPA is also the owner of the SaferAustin web page.

A political action committee with the same name filed a campaign treasurer appointment with the city Nov. 2. James Wood, a personal injury lawyer in Austin, is listed as the treasurer for the VOPA PAC. He only has one local campaign contribution reported in the city’s campaign finance database ($50 to Pooja Sethi’s failed City Council bid in 2020) and appears to have little presence in the Austin political scene. Wood was unavailable to speak with us for this story before press time.

According to mandatory fundraising disclaimers on the site, as well as its privacy policy, the SaferAustin page is actually operated by the Austin Police Association PAC. Neither APA President Thomas Villareal nor leaders of the APA PAC have responded to our requests for comment at press time.

Two people told us canvassers said that Trent Pool had hired them to collect signatures. Another canvasser, in a recording shared with the Chronicle, said they worked for a company called “Accelevate.” Pool worked in former Council Member Don Zimmerman’s office and has since helped launch a political campaign firm called Accelevate 2020. According to Accelevate 2020’s web page, the firm employs a “team of First Amendment specialists” that “can fulfill any ballot access and petitioning needs all over the country”.

The firm claims to have gathered “millions of signatures across the US” for various political causes – some of which were collected for Save Austin Now. A campaign finance report filed Oct. 4, 2021 shows that from July through September of that year, the SAN PAC paid Accelevate 2020 $72,500 for “petition consulting and campaign services.” Pool and Accelevate 2020 did not respond to our requests for comment for this story.

The deadline for City Council to add items to the May 3 ballot is Feb. 17. But before Council can do that in response to a citizen initiative, the City Clerk’s office has to validate petition signatures – which the Clerk’s office says it takes “at minimum” 30 days to complete. Once a petition is validated, it has to be added to a Council agenda, which can take a few days, so in reality, initiative campaigns will have to submit signatures sometime in mid-January if they want to be certain to make the May 3 ballot.

The ultimate goal of the campaign behind the faux-APOA remains unclear. But Equity Action said that the effect this kind of deceptive tactics can have on Austin’s citizen initiative process are already clear. “Fraudulent behavior like this undermines the ballot petition signature collection process, harms our democracy, and needs to be stopped,” Equity Action Board Member Alycia Castillo said. “Austinites deserve to know who is behind this.”