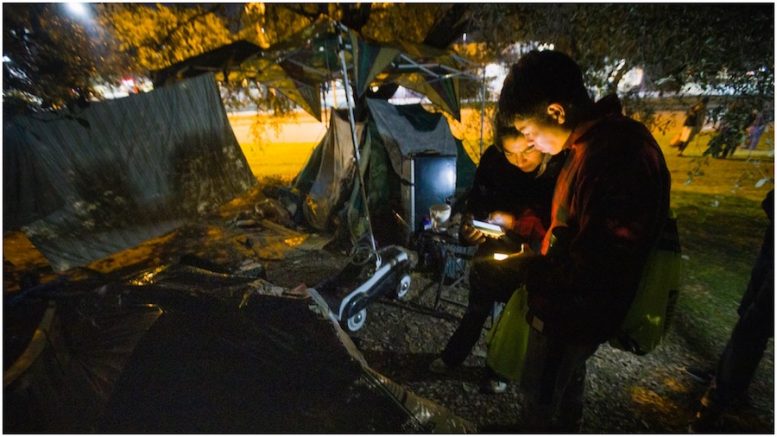 Volunteers collect data at a tent camp at the corner of Riverside and Pleasant Valley for the annual Point in Time (PIT) Count in January 2020. (photo by Jana Birchum)

Responding to calls for updated data, the Ending Community Homelessness Coalition (ECHO) released a report today showing a decrease in the number of people experiencing unsheltered homelessness in Austin since January 2020.

Using a different methodology than the Point in Time Count conducted annually prior to the COVID-19 pandemic, ECHO concludes that on Jan. 28, 2021 approximately 2,238 people in Travis County were living in tents, personal vehicles, abandoned structures and other locations not intended for human habitation, compared to 2,262 individuals on the same date in 2020.

In addition, 922 people were living in temporary shelter, transitional housing, or one of the Protective Lodges (against COVID-19) set up by the city, bringing the total number of people experiencing some form of homelessness in 2021 to 3,160. That translates to roughly 237 individuals experiencing homelessness per 100,000 people living in Travis County – a rate that has stayed fairly consistent since 2019.

In 2020, the U.S Department of Housing and Urban Development gave ECHO and its peer agencies around the country the option to skip the otherwise mandatory Point in Time Count, to limit COVID-19 transmission among both the unhoused and the scores of volunteers who conduct the count (overnight, usually in January) each year. But given the heightened attention the city’s homelessness crisis has garnered from policymakers and the broader public, ECHO’s data team devised a new – perhaps more accurate – methodology to get a current census, by taking a snapshot of people active in the Homeless Management Information System (HMIS) database on Jan. 28, 2020 (and on the same date in 2019 and 2021) who were identified as living without shelter.

The HMIS database is used by ECHO, which coordinates services delivered locally in what HUD calls the Continuum of Care, and its partner providers to track the housing status and needs of unhoused clients. Those agencies consider HMIS to be a more accurate indicator than the PIT Count, but it’s not 100% so. A person may self-resolve their homelessness long before case managers update the system, and people who don’t get services at all are still able to be spotted by PIT Count volunteers. (Many communities don’t have Continuum of Care agencies or databases as comprehensive as HMIS, so in those places the PIT Count is still essential.)

After years of gradual increases in the local PIT Count, and a 20.6% increase in the unsheltered population in HMIS from 2019 to 2020, the small decrease in 2021 will likely be surprising to many Austinites. Throughout the last year, and again with the release of ECHO’s report today, agencies and advocates have cautioned that the increasing visibility of homelessness, prompted by various factors relating to the pandemic, did not mean the number of people living without shelter in Austin was increasing or that people were not being placed in stable housing.

Throughout 2020 and into 2021, shelters have operated at reduced capacity to allow for social distancing. Even with these precautions, as unhoused individuals learned about the risk of COVID-19 transmission in shelter settings, many opted to live out in the open to protect themselves. Those in encampments had better access to tents and other living supplies delivered by service providers and community volunteers, and U.S. Centers for Disease Control guidelines advised against disrupting and clearing camps to prevent the spread of COVID-19. These factors were aided by City Council’s 2019 moves to decriminalize homelessness, which were partially reversed by voter approval of Proposition B on May 1, but would have been true regardless of the city’s policies.

“When taken together, these health and safety measures increase the visibility of homelessness in public places, but our data indicate this visibility is not reflective of a rise in the number of Austinites who are experiencing homelessness,” ECHO’s Director of Research and Evaluation Akram Al-Turk said. In fact, a 2015 study found no direct connection between proliferation of encampments and an increase in overall homelessness in cities across the United States. 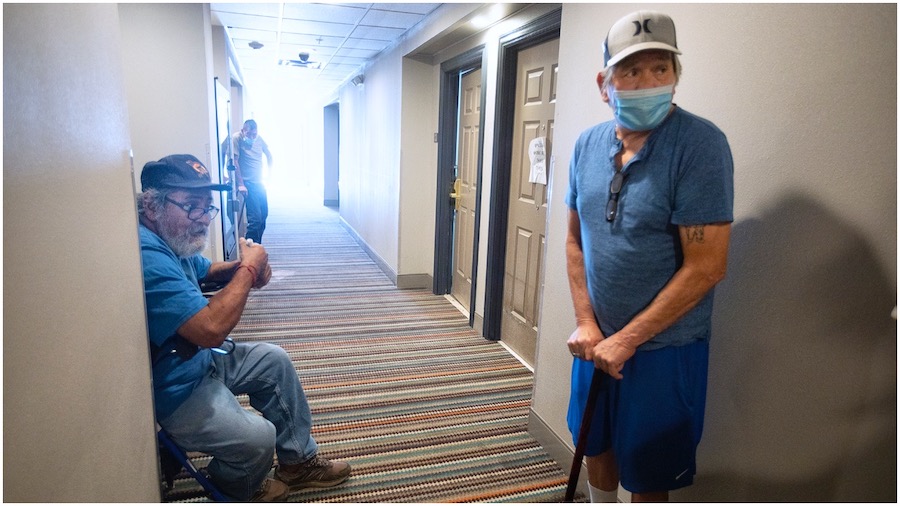 The report also found that as of Jan. 28, 164 people had exited one of the city’s ProLodges into permanent housing and 13 into temporary housing (a total of 187 people were permanently housed, according to HMIS data, in 2020). ECHO Executive Director Matt Mollica said that one of the lessons of 2020 is the need to shift away from congregate shelters – facilities such as the Austin Resource Center for the Homeless, until it changed its operations model in 2019 – and toward non-congregate solutions like ProLodges. “We had to see a decompression of the congregate shelter setting due to COVID and I think there’s a likelihood we will not see a return to [that] setting,” Mollica said. “That is a shift that Austin is ready to make and is already in the process of making.”

Analysis of the HMIS data also illustrates the continued demographic disparities in who experiences homelessness. Although just 8% of Travis County residents are Black, they accounted for 37% of those experiencing homelessness in 2020, about the same rate as in previous years. A similar number, 8%, of those in Travis County are living with a disability according to American Community Survey data, but 69% of the unhoused population in HMIS reported living with a disability.

Leaders in the public, private, and nonprofit sectors recently set a goal of housing 3,000 people living on Austin’s streets within the next three years – an ambitious but not impossible goal. According to HMIS data, 3,630 people exited homelessness into some form of stable housing since 2017. However, only 781 of those people were entered into permanent supportive housing – the most successful method for ending a person’s homelessness long-term, according to both ECHO and national experts.