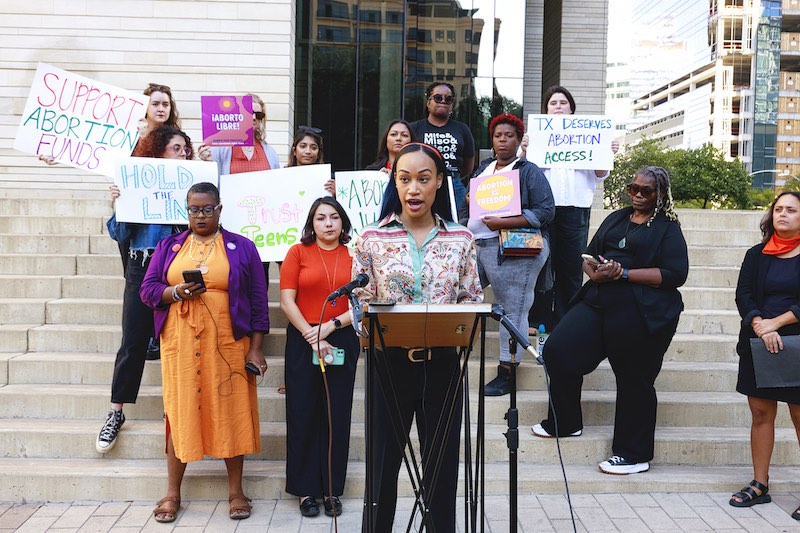 Abortion rights advocates hold a press conference in front of the Federal Courthouse in Austin, Texas before the start of a preliminary injunction hearing on how abortion advocates can assist patients leaving the state for abortion care (Photo by Jana Birchum)

Texas Attorney General Ken Paxton, who literally ran away to avoid being served a subpoena earlier this week, may have to show up in court after all.

But he did not appear at Austin’s federal courthouse Tuesday, Sept. 27 to testify in a lawsuit from nonprofits that want to help Texans get abortions out of state (after Paxton filed a motion to quash the subpoena Monday). By the end of that hearing, U.S. District Judge Robert Pitman had not yet decided on whether Paxton would need to take the stand.

The lawsuit comes from a group of abortion funds and Dallas-based abortion provider Dr. Ghazaleh Moayedi, who argue that virtually every activity supporting reproductive choices (providing pregnant people with lists of out-of-state clinics, funding their travel out of state, providing Texans in those states with abortion pills) is now subject to prosecution and hefty civil penalties. This, they argue, threatens their rights to free speech and interstate travel. They are asking Pitman for a preliminary injunction that would block Paxton from pursuing criminal charges or civil penalties against abortion funds and doctors for those actions.

To show why this is needed, the lawsuit cites a series of statements (including tweets) from Paxton threatening exactly those consequences. The A.G.’s office can pursue civil penalties – fines starting at $100,000, with no maximum – for aiding in the performance of an abortion under Texas’ Human Life Protection Act (the “trigger law” that took effect 30 days after the U.S. Supreme Court entered its final judgment in the Dobbs ruling overturning Roe v. Wade). Though Paxton can’t directly prosecute people for providing abortion support, he’s said the A.G “stand[s] ready to assist any local prosecutor who pursues criminal charges.” The HLPA does not include criminal penalties, but pre-1973 state statutes that do remain on the books.

Pitman acknowledged early in the day that it’s “unique” for elected officials to testify personally on behalf of their agencies, but the plaintiffs’ counsel argued Paxton’s statements “from his own mouth” mean that “he’s the only one who can testify” as to whether he really meant them and thus the abortion funds and providers have cause for concern. Assistant AG Christopher Hilton disputed this, saying the statements’ chilling effect depends solely on their content, not Paxton’s motives: “[The plaintiff’s speech] could not possibly have been chilled by the unspoken subjective intent.” The state’s attorneys also argued that, because Paxton doesn’t really have the authority to prosecute, “to the extent there is any chill [upon the plaintiffs], it’s a self-imposed, unreasonable chill.”

Later in the hearing, however, Paxton’s team would flub its argument that the A.G.’s presence would not add any value to the proceedings. After witness Rosann Mariappuram of Jane’s Due Process read aloud from a cease-and-desist letter sent by Rep. Briscoe Cain, R-Deer Park, to abortion funds – on which Paxton was copied – an attorney for the plaintiffs asked if this indicated to JDP that Paxton agreed with Cain. Paxton’s team objected that Mariappuram could not possibly know what Paxton thought of the letter or whether he evenread it. “Do you really wanna go there?” Pitman asked.

Later, plaintiff’s counsel told Pitman they had a series of additional statements they wanted to include in the record, should Paxton testify, but that would not make sense for other witnesses to read. Paxton’s team argued that without a witness who could speak to the statements, they need not be included. Pitman responded that they knew who that witness would be.

At the end of the long day, Pitman agreed with plaintiffs that, should he decide to allow Paxton’s subpoena to be quashed, they could at least submit the questions that they would have asked Paxton if given the opportunity. With or without him, the suit could provide useful clarity to Texas’ current abortion law, establishing whether Texans can freely share information about abortion care without penalty; whether doctors in Texas can offer telemedicine abortion care to patients in haven states where those doctors are licensed; and whether and how abortion funds can pay for Texans to travel to states where abortion care remains protected.

Right now, those things are largely not happening, according to testimony from the leaders of the plaintiff groups, including JDP, Lilith Fund, and Fund Texas Choice. All said they are still fundraising and sharing some resources, but they are no longer directing callers to specific clinics; their hotline capabilities have been severely limited; and they can’t fund travel out of state, for fear of civil and criminal penalties for those actions, which both Paxton and Cain have described as illegal and criminal under Texas law.

On cross-examination, Paxton’s team asked repeatedly if the witnesses understood that Paxton and Cain themselves did not have the power to prosecute them for crimes, to which witnesses responded that Paxton’s and Cain’s positions of power could still lead to litigation or criminal charges even if unfounded. The defense also sought to establish that if the plaintiffs were still talking about abortion at all and offering resources of any kind, their First Amendment rights must be intact – to which witnesses said they are no longer speaking freely.

Dr. Moayedi, an OB/GYN licensed in 20 states, has ceased all abortion care including via telehealth pending further clarification on whether it’s legal for her as a Texas resident to provide such care. After asking if Moayedi would call Paxton a white supremacist (she said he’s aligned with white supremacist viewpoints), one of the AG’s attorneys asked how many thousands of unborn children of color she’d killed. “I reject the premise of your question,” Moayedi said. “You assume women of color can’t make their own decisions.”

Pitman seemed inclined to agree with the plaintiffs’ arguments, noting that Paxton himself has not made it clear that they have nothing to worry about, as the state’s attorneys asserted. Instead, the A.G. has referenced the availability of civil penalties, and when asked to clarify, “he goes out of his way to say the least,” Pitman said. The judge will likely rule on the injunction in the coming weeks; if he grants it, abortion fund directors said they’ll immediately begin funding interstate travel, and Dr. Moayedi said she will be able to resume out-of-state abortion care, beginning with patients in Kansas.