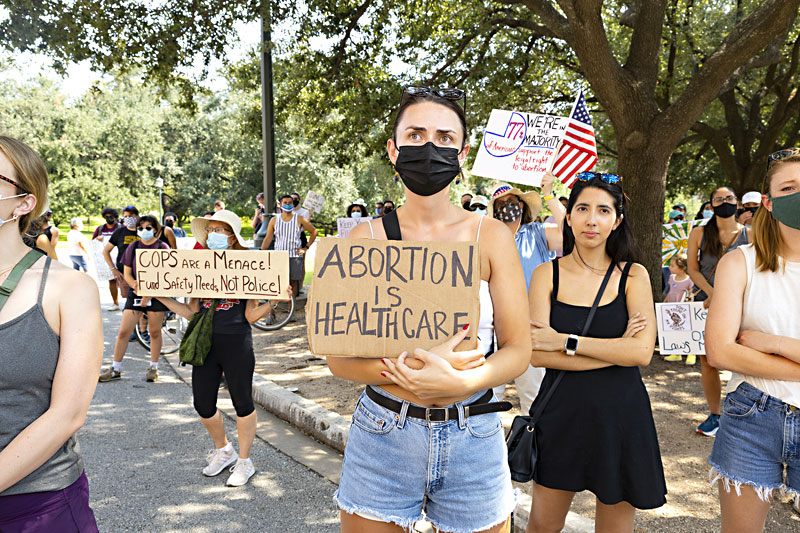 An Austin-based federal judge has temporarily halted the state’s near-total abortion ban, slamming it as an “offensive deprivation” of Texans’ constitutional rights.

On Wednesday evening, Oct. 6, U.S. District Judge Robert Pitman issued a preliminary injunction to block Senate Bill 8 – at least for now. The law, which took effect Sept. 1 and includes no exception for rape or incest, bars abortion care when embryonic cardiac activity is detected, typically around six weeks. It also empowers any private citizen the right to sue to enforce the law; not only abortion care providers, but any person or group that “aids or abets” abortion care, is subject to legal challenges.

Pitman sided with the U.S. Department of Justice, which filed suit against the law last month after a legal challenge from Texas abortion providers stalled at the 5th U.S. Circuit Court of Appeals. Providers appealed to the U.S. Supreme Court, now stacked with anti-choice justices; SCOTUS declined to act and allowed the law to take effect on Sept. 1 in a 5-4 ruling. Attorney General Merrick Garland called Pitman’s order “a victory for women in Texas” and for the rule of law.

“From the moment Senate Bill 8 went into effect, women have been unlawfully prevented from exercising control over their lives in ways that are protected by the Constitution,” wrote Judge Pitman in his 113-page order. “That other courts may find a way to avoid this conclusion is theirs to decide; this Court will not sanction one more day of this offensive deprivation of such an important right.”

For nearly 40 days, the overwhelming majority of abortion care in Texas has ceased, sending providers and patients into a state of chaos and fear. In recent DOJ court filings, abortion providers describe the devastating and traumatic experience for patients unable to receive care in their home state. Clinics in neighboring states are experiencing backlogs and longer wait times for appointments as they are seeing an unprecedented influx of Texas patients.

Lawsuits filed under Senate Bill 8 will not be accepted by Texas courts, wrote Pitman. All state court judges and state court clerks must abide by the preliminary injunction.

Pitman also rebuked Texas, which had requested the judge stay the preliminary injunction until state attorneys had the opportunity for appellate review. “The State has forfeited the right to any such accommodation by pursuing an unprecedented and aggressive scheme to deprive its citizens of a significant and well-established constitutional right,” he wrote.

Despite the slap on the wrist, Texas has already appealed the order to the 5th Circuit, which is often sympathetic to the state’s anti-choice laws.

Stressing the “endless cruelty” of the law, Nancy Northup, president of the Center for Reproductive Rights, which led the legal challenge against SB 8 from abortion providers, noted that even with a temporary block in place, clinics and doctors could still face the threat of being sued retroactively thanks to the severe and novel provisions within the onerous law. It’s unclear at this point which providers, if any, will resume services.

“For 36 days, patients have been living in a state of panic, not knowing where or when they’d be able to get abortion care,” said Northup. “While we are relieved that a court has finally blocked this unconstitutional law, today’s court order is only temporary. This is not the end. We know the state of Texas will keep defending this malicious ban.”