Pelosi: “I wish I could be more optimistic” 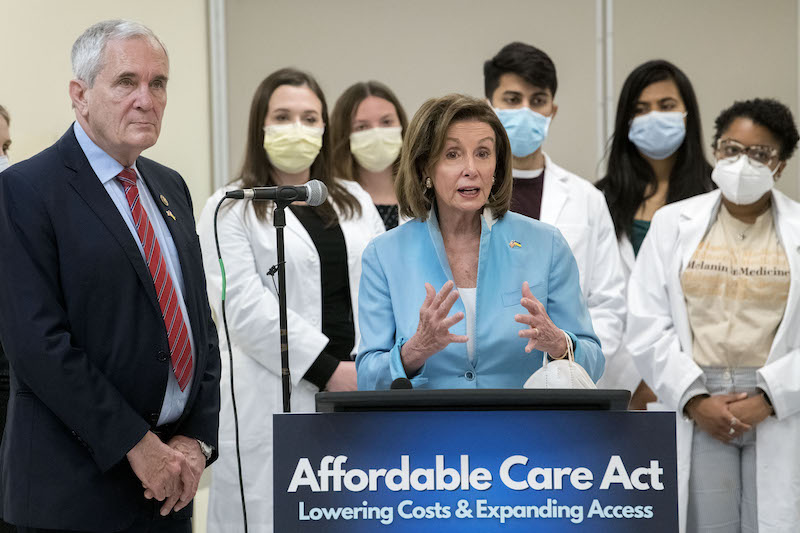 Speaker Nancy Pelosi’s last visit to Austin at the start of September coincided with the enactment of SB 8, the near-total abortion ban that allows private citizens to sue over abortion.

She returned to Austin this week to celebrate the 12th anniversary of the Affordable Care Act’s passage – in the state with the highest rate of people without health insurance – and found the likelihood of regaining abortion access in even worse shape. In January, the U.S. Supreme Court threw out most of Center for Reproductive Rights’ case against SB 8, and March 11 the Texas Supreme Court killed what was left of the suit. The U.S. Supreme Court is slated to hear a case challenging Roe v. Wade in June, and the U.S. Senate this month failed to advance Women’s Health Protection Act that would have codified Roe. That bill was one Pelosi started working on during her last trip to Austin.

When the Chronicle asked if Pelosi believed there was any compromise that could lead to the Senate passing such codification, Pelosi frowned. “No. I wish I could be more optimistic – I have no reason to be, but we never give up.”

She said, with the current set of lawmakers in D.C., there is still hope in public opinion. “(Abraham) Lincoln said public sentiment is everything. With it you can accomplish almost anything, without it practically nothing.”

Pelosi, joined by U.S. Rep. Lloyd Doggett, D-Austin, also pointed to hope for Texans seeking affordable healthcare. She and Doggett are working to pass legislation that would increase access to the ACA marketplace for the two million low-income, uninsured Texans who were blocked from Medicaid when Texas opted out of the expansion that would have included them. As a “backup,” Doggett highlighted the COVER Now Act, which would allow local governments to cover medicaid eligible people.

Despite the state’s resistance to ACA – which has resulted in Medicaid being unavailable for almost anyone who is not pregnant or disabled – Doggett said he believes Texas has benefited perhaps more than any other state from the act. Almost 600,000 Texans applied for Medicaid in 2021 alone and about 2 million Texans are now insured under the marketplace.

Even as health insurance options expand, though, whether or not Texans – insured and uninsured – will be able to access abortion services in-state and without secrecy hangs in the balance. “This will be an important decision coming down from the court,” Pelosi said. “One thing I will say about the Court: How they could have ever let the Texas law proceed with the vigilante aspect of it really tells you something about how low they will go to disrespect women.”

For more, check out our War on Women’s Health page.