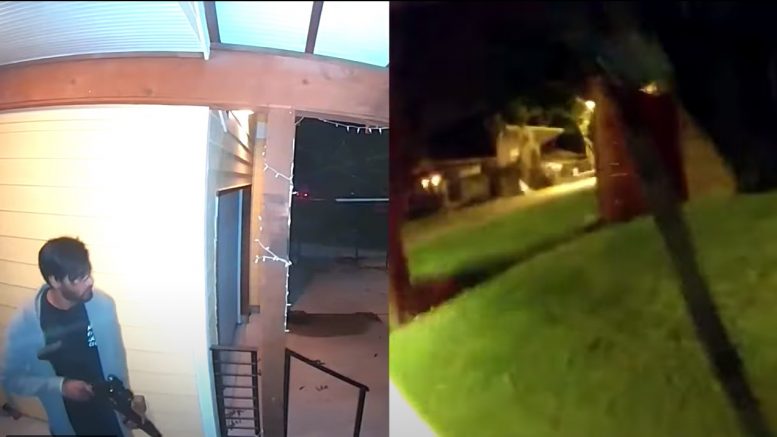 An edit released by the Moonesinghe family of the shooting footage shows Rajan Moonesinghe on the left (Ring camera video) and Ofc. Daniel Sanchez’s bodycam on the right, just before he fired.

Upon viewing the critical incident video, it appears Kathy Mitchell’s assessment of the police killing of Rajan Moonesinghe proved to be correct.

In a story posted yesterday, the criminal justice advocate interpreted two sentences in the Austin Police Department’s Nov. 21 account of the shooting – “The first officer to observe Mr. Moonesinghe gave him a verbal command to drop the gun,” followed by “The officer fired his Department-approved firearm at Mr. Moonesinghe” – to mean the officer who killed Moonesinghe shot him instantly after shouting his warning. APD body camera footage released by the department on Nov. 30 shows that is exactly what happened.

Officers had been called to the Bouldin neighborhood in South Austin on Nov. 15 after a neighbor reported a man across the street pointing a gun into the interior of his own home. In one of several videos posted to APD’s Youtube page, an officer, identified as Daniel Sanchez, parks his cruiser, runs to the yard next to Moonesinghe’s house, and yells, “Drop the gun.” He immediately fires off three shots, followed by two more. Sanchez and fellow officers Stephen Markert and Luis Brito wait thirty seconds, then advance to Moonesinghe’s front porch, where they find him crumpled on his side, dying.

A Ring doorbell camera video taken from Moonesinghe’s front porch and also released by APD shows the moments before officers arrive. Moonesinghe seems to address someone inside his house, saying, “You want this?” and pointing his rifle. He fires a shot into his home, then another. After the second shot, police cruisers pass in the street; the second parks just past Moonesinghe’s house. Moonesinghe steps onto his porch, not seeing Sanchez, who has exited his car. He is shot, never looking over toward Sanchez, and drops out of the frame, exclaiming, “It wasn’t me.”

The videos and the facts they illustrate have devastated Moonesinghe’s family. His brother, Johann, the co-founder of a restaurant investing and consulting business with Raj, called the shooting “murder.” “[I]t is evident that the officer who shot Raj did this without identifying himself, without thinking, and before giving my brother a chance to explain who he was and why he was outside,” Johann said in a statement. “Instead, he arrived without flashing lights or sirens, pulled out an assault rifle, took a hidden defensive position behind a fence 25 yards away, and killed my brother. He began firing before finishing his command to ‘drop your gun’ and continued to fire once Raj had dropped his gun and put his hands up.” The family has released its own split-screen edit that syncs up the 911 call, the Ring footage of Moonasinghe, and the video from Sanchez’s bodycam “to present an accurate timeline of events.”

In his statement, Johann notes that Raj had believed there was an intruder in his home. He asks that the Travis County District Attorney investigate the killing; the office is participating in a criminal investigation of the incident alongside APD’s Special Investigations Unit. In an updated statement on Dec. 1, APD emphasized that it had released the videos in conformance with its own policy and in the interest of transparency and accountability.

Criminal justice advocates like Chris Harris of Austin Justice Coalition are saddened by what they see as the latest in a series of unnecessary killings by Austin police. “What’s most concerning about it is that the officer’s call for the victim to drop the weapon was followed up with immediate deadly force,” Harris said. “There was no chance given to comply. We’ve got to figure out a way to communicate with somebody before taking their life.”