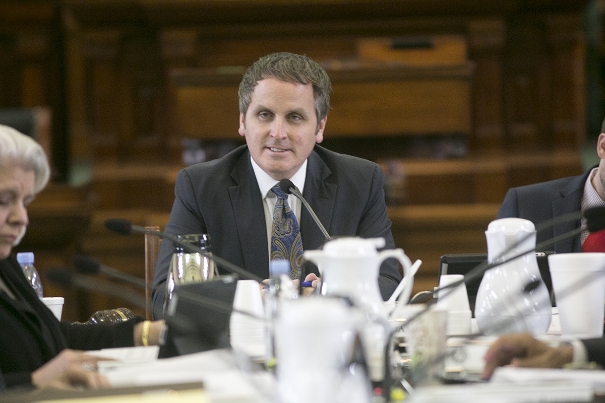 As Texans continue to recover from a historic blackout and deadly winter storm – and navigate an unprecedented public health crisis – the Senate State Affairs Committee turned its full attention to not one, not two, but seven anti-abortion bills approved Tuesday, March 16, following a marathon hearing at the Capitol on Monday.

The votes in State Affairs were predictable, as anti-choice

Sen. Eddie Lucio, Jr. D-Brownsville, sided with the six Republican members against his two fellow Democrats. The seven measures included Senate Bills 8 and 9, which got the low bill numbers that go with being “priority” items for anti-choice stalwart Lt. Gov. Dan Patrick. SB 9 by Sen. Angela Paxton, R-McKinney, wife of scandal-ridden Texas Attorney General Ken Paxton, is a “trigger bill” that would completely outlaw abortion should the 1973 Roe v. Wade ruling be overturned at the U.S. Supreme Court. In the meantime, SB 8 by State Affairs Chairman Bryan Hughes, R-Mineola – misleadingly dubbed the “heartbeat bill” – would bar abortion after fetal or embryonic cardiac activity is detected, which can happen as early as six weeks. Since most women aren’t even aware they are pregnant at that point, the bill amounts to a near-total abortion ban. (Rep. Shelby Slawson, R-Stephenville, filed the House version, HB 1515.)

“Ten other states have passed heartbeat bills, we have to admit Texas is behind,” said Hughes, apparently in a race to ensure no Texas woman’s bodily autonomy goes unrestricted. When Sen. Beverly Powell, D-Burleson, asked Hughes why his bill had no exceptions for cases of rape or incest, Hughes answered that Texas law sufficiently penalizes rapists and that a “little unborn child shouldn’t be punished for an act done to the mother.” As is typical of such bills, both SB 8 and SB 9 also include language that purports to protect women “on whom” abortions are performed or attempted from civil or criminal liability.

The committee also eagerly endorsed SB 650 by Sen. Donna Campbell, R-New Braunfels, which takes aim at Austin’s unprecedented investment in its fiscal 2020 and 2021 budgets to fund abortion support efforts: travel, child care, lodging, and other logistics needed by women seeking to clear Texas’ ever-higher barriers to abortion care. The bill would prevent other cities from following in Austin’s footsteps; as the Chronicle reported last month, Campbell is upset that Austin has found a “loophole” to her 2019 bill, SB 22, that bars any “taxpayer resource transaction” with an “abortion provider or affiliate.” That was Campbell’s attempt to sever Texas local government partnerships with Planned Parenthood, such as the nominal lease of city-owned property for PP’s clinic on E. Seventh St. Austin’s funding for abortion support goes to groups that do not themselves provide abortion care.

Also in and out of State Affairs: a bill that eliminates the humane exception to the state’s current 20-week abortion ban for severe fetal abnormalities, which could force women to give birth to non-viable fetuses (SB 1173 by Sen. Kelly Hancock, R-North Richland Hills); restrictions to medication abortion, including banning the shipment of abortion-inducing drugs to patients by mail (Lucio’s SB 394); and requiring women to be offered counseling from non-medical, typically faith-based crisis pregnancy centers in the Alternatives to Abortion program before receiving the care they want (Paxton’s SB 802). Paxton’s bill would create a statewide database of women seeking abortions (and being offered A2A counseling), which also drew pushback from Powell. “Do you have any concerns about the data breaches we’ve experienced statewide and nationwide, and the access to this data by third parties?,” questioned the Democrat, stressing the sensitive nature of the information. Paxton replied that we will “always be worried about data breaches.”

Wrapping up the State Affairs seven-pack was a draconian omnibus bill, SB 1647 by Sen. Charles Perry, R-Lubbock, which combines Hughes’ and Hancock’s measures, with a straight-up ban to take effect no later than 2025 – legislation heavily supported by the state’s loudest anti-abortion lobby group Texas Right to Life. “We have a chessboard set in front of us and we want to win,” said John Seago with TRL, which has been pushing its aggressive anti-choice strategy for the 87th (“The Abolition Agenda”) since well before the November elections.

Meanwhile, Whole Woman’s Health Alliance noted in a statement that a “lack of leadership in the state” left millions of Texans without power, water, and heat last month, after losing more than 44,000 Texas lives to COVID-19 over the last year, and Texas politicians are using abortion as a “smoke screen” to cover up those failures. “Texas lawmakers are showing their true intentions while failing to meet the basic needs of the people who live here,” said Courtney Chambers, Texas advocacy director for the Alliance, after the State Affairs hearing. “Texans deserve better than lawmakers who desire to rob people of their ability to decide what’s best for them, their bodies, and their futures.”

The committee members – often neglecting to wear masks during the lengthy hearing – invited testimony strictly from TRL and other allies; while Hughes claimed that “no one is excluded from this process,” virtual testimony was not allowed during the hearing that stretched until midnight, and almost all in-person public testimony came from anti-abortion activists. The bills now move to the full Senate, where they are expected to be blessed by Patrick before they face an uncertain fate in the Texas House.