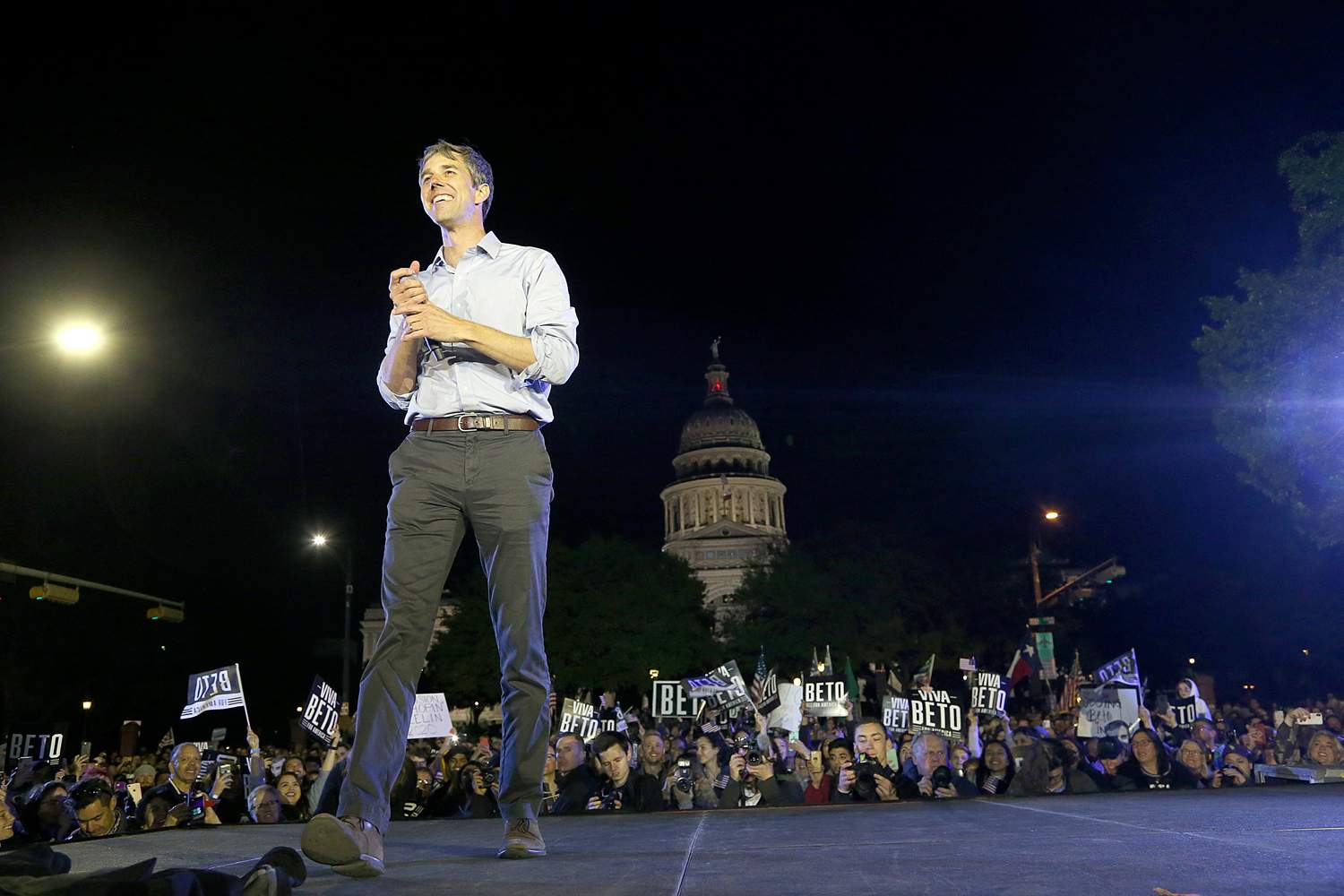 Beto O’Rourke at the Texas Capitol back in 2019. (Photo by Gary A. Miller)

Again, Beto O’Rourke is driving into small towns in red Texas to talk about democracy. Yesterday’s stop was Center, almost in Louisiana near the tip of Toledo Bend Reservoir, home to a Tyson Foods chicken plant and Railroad Commissioner Wayne Christian, and seat of Shelby County, which gave 79.1% of its vote to Donald Trump at the last election.

The former El Paso congressman, near-miss U.S. Senate contender, and wider-miss presidential aspirant has been on the road for a couple of weeks on this “Texas Drive for Democracy” campaign tour, holding town halls about voting rights. He has a few more stops in deep East Texas – Lufkin, Nacogdoches, Marshall – before heading to Austin for a big rally at the Texas Capitol on Father’s Day, just before sunset (5:30 pm, to be precise). “Folks are turning out; they care about this,” he told us from the road Thursday morning. “They want to take action.”

He notes the statewide tour organized by his voter outreach campaign Powered by People has covered both friendly and unfriendly ground (not all 254 counties, though, not this time). “We’ve been spending time in Midland, Lubbock, Abilene, Wichita Falls, Rains County, but also in Fifth Ward Houston, South Dallas, and downtown Beaumont last night,” O’Rourke said; the last three are Black Democratic strongholds. “It’s a mix of Democrats and Republicans, big-city folks and small-town folks, and all of them are outraged with what the Legislature and the governor have tried to do to tamper with our elections.”

As they should be. The stated aim of the “Texas Drive for Democracy” blitz is to ratchet up pressure on the U.S. Senate as it gets ready to consider the For the People Act (S.1) and John Lewis Voting Rights Act (H.R.4), both of which include electoral protections that until quite recently were supported by both parties, and have now been weaponized like so much else in MAGAmerica that used to be common sense. But as O’Rourke related, the folks showing up to visit with him have plenty to be mad about right here in Texas, after the state’s Republican regime tried – and, for now, failed – to impose its own list of spurious “election integrity” tactics to take away their right to vote.

“Invariably, someone takes the microphone who has a disability,” O’Rourke said. “They’ll talk about just how hard it is to vote already,” and how much harder it would be under the various versions of Senate Bill 7 and House Bill 6 that bounced around the 87th Texas Legislature right until its dying hours. “It would limit curbside voting. It would require them to disclose their personal medical information to prove their disability, which Texas had never asked anyone before, to vote an absentee ballot. There are folks who cannot believe what the Legislature attempted to do.”

He ticked off more of the lowlights: “That partisan poll watchers could have free rein in the polling place. … trying to stop ‘souls to the polls’ on Sunday mornings, and especially the provision allowing Texas to overturn elections going forward. I’ll have folks say, ‘I’m Republican, and I believe in voter ID, and I don’t agree with you on everything, but this is crazy and we’ve got to do something about it.'”

They’ve already done more than most, simply by showing up in person; O’Rourke says his crowds, in the hundreds during the summer of a non-election year, are “pretty encouraging,” and that many he’s met with are planning on making the trek to Austin this weekend. Of course, the locals will outnumber them, even on Father’s Day and Juneteenth weekend, perhaps especially then. “More than almost any other community in the country, Austin takes democracy seriously,” O’Rourke said. “Democracy is under attack unlike any time in this country’s history, and so if we’re going to save that democracy and preserve the right to vote, we’ve got to show up, and that means coming to the Capitol on Sunday. So we hope to see a really good turnout.”

People in Austin, and Texas Democrats, and O’Rourke’s still-numerous fans and supporters, and increasingly all Texans who haven’t gone MAGA are getting used to fighting hard and fighting back, but are also used to disappointment. It still seems quite unlikely that S.1 or H.R.4 are going to make it out of the busted china saucer that is the U.S. Senate; the guy who broke it with his little turtle hammer, Mitch McConnell, said as much Thursday, even after Sen. Joe Manchin, D-W.Va., produced an edited version of the For the People Act that he’d be willing to support. Here in Texas, GOP leaders are so embarrassed by the Texas House Dems’ dunking on them with their last-minute quorum-breaking walkout – for which they have received a heroes’ welcome in D.C. this week – that Gov. Greg Abbott is not going to let the Lege leave town this summer, through however many special sessions, until he gets something he can call a victory for “election integrity” as he faces a contested 2022 primary.

In light of this, O’Rourke thinks the folks he’s rallying “know it’s going to be hard, but they’re in this fight for the distance. And what they’ve been doing is already making a difference.” He cites Manchin’s slow movement into the light, along with public backtracking by several legislators – including from the East Texas counties where he is right now – on the worst provisions of SB 7, which they had no idea were in the bill they voted for. (To be fair, some of those provisions didn’t materialize until the very last minute, but still.) “I don’t blame people for being a little cynical about whether or not lawmakers listen to them. In this instance, they are. But there’s no air-conditioned solution to this challenge to democracy; you’re going to have to get out there and sweat a little bit.”

That can be arranged, at a big rally on the first day of summer, as the state’s power grid ominously shudders again, under heat stress that keeps getting warmer and keeps coming earlier. Abbott has flat-out whistled this problem away, telling folks just this week the grid’s in the best shape it’s ever been; it doesn’t help him politically to tell the truth, and he’s made no move to place the matter back before the Legislature.

There’s a lot of stuff that remains broken and may never be repaired in Abbott’s Texas; for his side, “election integrity” bullshit is mostly a distraction, since Texans’ free and fair votes are already more suppressed than in any other state. (This would not be so if S.1 and H.R.4 pass, hence Powered by People’s focus on making the voices of millions of Texans heard more loudly in D.C. than the dumb grunts of the state’s two terrible senators.) For O’Rourke’s side, on the other hand, democracy protection is the tip of the spear. “People can connect the dots,” he says. “Whether it’s fixing the electricity grid, or expanding Medicaid so that you don’t die of diabetes in the year 2021, or climate, or racial justice, or gun violence, or education – the only way you’re going to be able to make a meaningful difference is to get democracy right.”