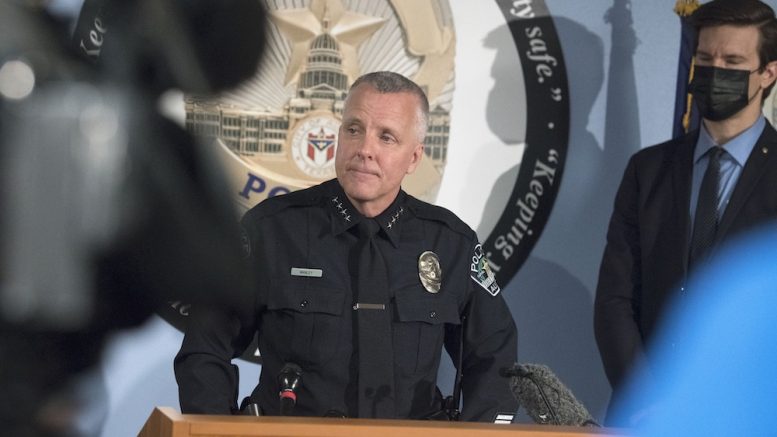 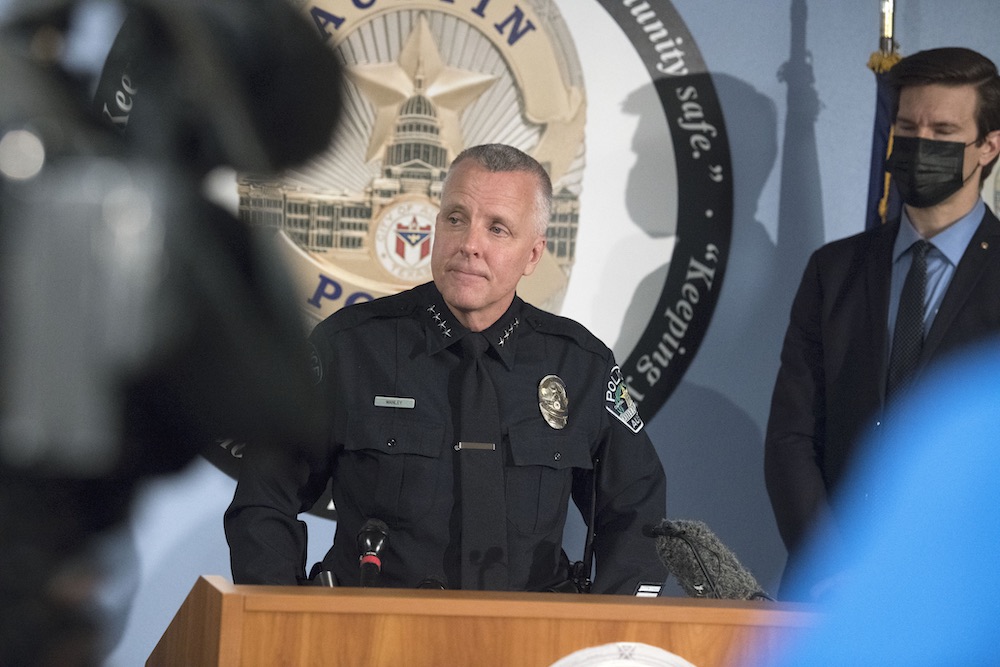 Austin Police Chief Brian Manley will retire on March 28, following a year in which criminal justice activists and community members have called for the chief to resign.

That call began over how Manley handled revelations that a former assistant chief regularly used racist language, then accelerated following the violent response to Black Lives Matter protesters his officers engaged in over the summer.

“Manley’s resignation is long overdue, but a good thing after a year of people demanding justice on the national and local level,” Austin Justice Coalition Executive Director Chas Moore told the Chronicle. “Brian Manley is not a bad guy,” Moore continued, “I think he tried to do the best job that he could. But it’s also a new day in Austin. Our expectations from public safety departments are completely different than the culture Manley was inundated in. This was the last step needed as we navigate the Reimagining Public Safety process, because it would be hard for people to buy into changes resulting from that process if Manley was still at the vanguard of the department.”

The push to oust Manley became much stronger at the end of May, as Austinites protested in Black Lives Matter marches following the killing of George Floyd by Minneapolis Police officers. Manley’s officers responded to the peaceful demonstrations on May 30 and 31 with extreme force; launching canisters of tear gas at protestors and injuring at least 11 with so-called “less lethal” lead-pellet rounds.

The department’s response to protestors prompted an emergency City Council meeting June 5 in which hundreds of people, including survivors of the police brutality and their families, spent hours testifying to their experiences with Austin police. The emotional testimony at that meeting motivated Council to pass four resolutions on June 11 to take immediate action to reform the department – such as banning the use of tear gas as means of crowd control – along with longer-term goals, such as eliminating the racial disparities in arrests between white, Black and Latinx Austinites. Meanwhile, calls to replace Manley continued to swell.

Council does not have the authority to fire the Chief of Police, and under state law, neither does City Manager Spencer Cronk, who could only demote Manley to the position he served in prior to assuming the role of chief (in Manley’s case, chief of Staff). With no apparent replacement within the chain of command, Cronk declined to act despite the growing pressure.

Even as four CMs publicly called on Manley to resign and Council unanimously approved a resolution stating they had “no confidence” in Manley’s ability to lead the department, Cronk stood by his man. At a press conference on Friday, Feb. 12, Manley told reporters that reaching the decision to retire was not an easy one. “Many different emotions are running through me,” Manley said, “but it is a day I am ready for and I am at peace with my decision.”

Manley did not address the calls for resignation he has faced over the last year, but noted that he celebrated his 30 year anniversary with APD – and as a law enforcement officer – on Feb. 1. “Reaching this 30-year mark was important to me,” Manley said, “because my father pinned my badge on my chest on Feb. 1, 1991.” Manley added that he’s “not worn down from the job” and that criticism from the public, reporters, elected officials, and from fellow officers is a part of the job. “I’m just ready for my next opportunity,” Manley said.

The prickly relationship between Council and Manley predates the Floyd protests or even the killing of Ramos. When Council voted unanimously in January of last year to decriminalize the possession of small amounts of marijuana, Manley responded defiantly. The very next day following the vote, Manley told reporters that his officers would continue to enforce state law – meaning, he would not comply with Council’s order. It took Manley six months to finally update APD policy to end discretionary citations and arrests over low-level marijuana possession.

The call for Manley’s resignation began over how Manley handled revelations that a former assistant chief regularly used racist language, then accelerated following the violent response to Black Lives Matter protesters his officers engaged in over the summer.

Manley didn’t just butt heads with the more progressive members of Council, either. Last month, Manley and CM Alison Alter had a spat over email when the West Austin CM asked Manley to “proactively investigate” whether or not any APD officers participated in the Jan. 6 Capitol insurrection in Washington, D.C., and to issue a department-wide communication condemning law enforcement participation in the events of that day.

Manley declined to launch such an investigation – a reasonable step considering the resources needed to conduct such work – but also resisted Alter’s urging that he condemn law enforcement participation. Manley eventually gave in and sent a memo to his department, but only after forwarding the entire email thread along with it – a move that frustrated several CMs.

Alter also was critical of Manley and APD’s handling of issues raised by survivors of sexual assault, including evidence that the department relied heavily on “exceptional clearance” to close rape cases without arrest or prosecution of a suspect; the CM led Council’s push for a third-party audit of APD’s handling of such cases. Manley is a named defendant in the two lawsuits filed by local sexual assault survivors alleging that APD’s and the Travis County District Attorney’s Office consistent mishandling of rape cases constitutes a violation of women’s constitutional rights.

When the Office of Police Oversight released its inaugural report analyzing racial disparities in stops, searches, and arrests between white residents and Black and Latino residents, Manley responded by calling for more research into the problem, as opposed to accepting OPO’s research and committing to addressing those disparities. The response frustrated OPO Director Farah Muscadin and served as another symbol for for activists that Manley was ill-suited to reforming the toxic culture of a department and profession he had served in for nearly 30 years.

In a memo announcing Manley’s retirement, Cronk said he will offer an interim chief up for Council confirmation “early next month” and that he will “immediately start to conduct a national search” to find a permanent replacement, a process which Cronk says will include “extensive engagement with our Austin community.”

The process used to select the city’s next Police Chief will be carefully watched. Many of Manley’s critics feel he was swept into the job without a sufficiently wide search, in the wake of his response to the 2018 bombing spree that killed two and injured several more. The state civil service law that prevented Cronk from firing Manley out and right also informs this search for a new chief, as justice advocates and their closer allies on Council will pressure Cronk to find an outside hire who wouldn’t be protected from accountability by that law.

Perhaps more importantly to efforts to reform APD, there are few leaders within the department who are thought to be sufficiently uninfluenced by a culture described in multiple internal and outside reviews (including the Tatum report) as racist, sexist, and retaliatory toward anyone who speaks out against it.

Moore told us that he implores Cronk to help the community “take our time and do the deep dive to get the best person for the job.” Moore said that expectations from the Austin community on what views and qualifications a Police Chief should possess have changed in the three years since Manley was made Chief. “I hope the city finds someone that understands there is a new job description for this role,” Moore told us.

Citing the state law that prevents a Chief promoted from within from being fired and the toxic culture rooted at APD, Moore also encouraged Cronk to look outside of APD to find a permanent replacement – and maybe even for the interim chief. “The culture within APD is going to have to go through deep transformational change before community members, especially in deeply impacted ones, will believe that the new Chief gets it,” Moore said. He added that being able to fire the next Chief will be an important accountability tool that Cronk should consider when making an appointment for Council confirmation. At the press conference Friday, Cronk confirmed he would be conducting a national search for Manley’s replacement.

The process that led to Manley’s appointment as Chief occurred during a different time, when the city’s attitude toward its police department was, broadly speaking, less critical than it is now. Even his leadership as interim chief during the bombings, a frightening time for the city, showed some racial blind spots; immediately following the first bombing death, Manley suggested that the victim, Anthony House, a Black man, may have constructed the bomb himself.

Later, Manley backtracked, but by the time his officers – with the help of federal law enforcement – identified and attempted to apprehend the true bomber, Mark Conditt (who killed himself), the history had already been written: Manley was the hometown hero who saved Austin from a domestic terrorist. It was a short jump from that moment – with a few community town halls in between – to Cronk appointing and Council unanimously confirming Manley as Austin’s next Police Chief.

Born and raised in Austin, Manley began his career as an APD patrol officer in 1991. He steadily moved up the chain, serving as lieutenant, commander, assistant chief and, finally, chief of staff to Art Acevedo before being named interim chief when Acevedo departed to lead the Houston Police Department in 2016.

Reflecting on a long career in policing, Manley said it was difficult to settle on one moment as the most important. His push to improve officer wellness came to mind, an effort he described as combating the trauma that officers can pick up by the nature of their work. “I equate it to picking up a pebble and putting it in your bag. Years and years after doing that, the bag gets heavy… which draws officers into coping mechanisms that are destructive to themselves and to our community,” the chief said.

While he’s proud of this time of chief, Manley said that his time with the Child Abuse Unit is where he was able to make the msot difference. “At the end of the day,” the chief said of his time as an investigator and supervisor of the unit, “you are dealing with children in horrible circumstances and you are there to help.”

Editor’s note: This is a developing story.