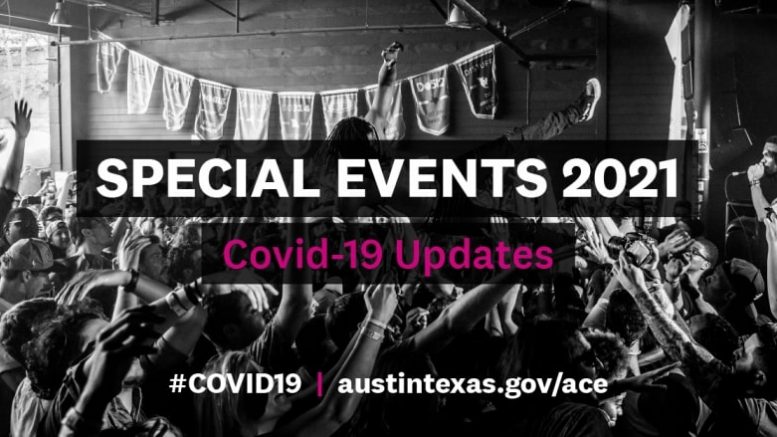 Image via City of Austin

Beginning Monday, Aug. 30, event organizers will need to do more to show how they plan to mitigate the spread of COVID-19 as part of the special events permit application process through the Austin Center for Events.

On Friday ACE, which coordinates with more than a dozen city departments (including Austin Public Health) as it issues permits for gatherings on both public and private property, announced enhanced criteria for events and venues. Since April, as part of its “Bringing Events Back” guidance, ACE has asked applicants to submit a COVID-19 Health and Safety Plan online, which APH must approve for indoor events with 1,000-plus attendees and outdoor events with more than 2,500 attendees. If the plans aren’t sufficient, APH staff will work with organizers to strengthen mitigation efforts. Organizers of smaller events are encouraged but not required to incorporate the recommendations into their planning.

Now, as Central Texas hospitals scramble to treat record numbers of COVID-19 patients despite two-thirds of Travis County residents aged 12 and up being fully vaccinated, ACE and APH have added new provisions to be addressed in these plans. These include pre-screening of attendees (as well as staff) via proof of a negative COVID-19 test within 72 hours of the event; maintaining at least six feet of distance between all attendees; and implementing “mask zones” in outdoor event areas where distancing is not possible.

Not all major events and venues in Austin require permits through ACE and as such aren’t mandated to adopt these measures; among these are Austin FC matches and other events at Q2 Stadium, Circuit of the Americas, and the newly opened Moody Amphitheatre in Waterloo Park. Local bars and clubs that hold annual sound permits, such as the Red River clubs hosting this weekend’s Hot Summer Nights series, also don’t need to secure permits through ACE.

Typical events that do include those involving street closures, such as two scheduled for this weekend whose anticipated permits were not issued due to the ongoing COVID-19 surge. Bat Fest, celebrating Austin’s much-loved colony of Mexican free-tailed bats living under the Ann Richards Congress Avenue Bridge, was set to return in person to Downtown Saturday with live music, arts and crafts, and food and drink vendors. The H-E-B Austin Sunshine Run, benefiting Austin Sunshine Camps, had been planned as a hybrid event to take place Sunday. On Wednesday, Aug. 25, organizers of both events were notified that local health conditions would not allow the events to proceed. The Sunshine Run planned to move ahead Sunday as an all-virtual event, while Bat Fest was cancelled.

Bat Fest producer Roadway Productions said in a statement, “We are shocked and devastated, as this is a huge financial blow and harmful to our reputation as event producers. We know it’s also hard on our ticket holders, our vendors, our bands, etc.” Roadway owner French Smith told the Chronicle its COVID-19 plan for Bat Fest was approved by APH in July, and that on Monday, Aug. 23, ACE manager Bill Manno emailed Smith that ACE would “continue with review of [Bat Fest] with anticipation that it will occur – provided that all Departmental reviews are approved as normal.” In that same email, Manno noted there will be “some additional COVID risk mitigation factors coming out soon [but] I do not anticipate them becoming effective until after Bat Fest.”

In response to the Chronicle’s request for comment from Manno, a city spokesperson said APH and ACE denied Bat Fest’s permit application “out of an abundance of caution,” citing the spread of the highly transmissible Delta variant and the current strain on local medical resources. “These strains can impact the City’s delivery of emergency-related services and the provision of City services required to support government functions.” The city’s special events ordinance, adopted in a pre-pandemic world in 2018 after years of work with event stakeholders, allows ACE broad leeway to deny permit requests that may overburden the city’s public safety resources.

Now, as legal wrangling over the power of local authorities to impose mask and vaccine mandates plays out in Texas courts, Smith asks whether Austin should seek to limit all large events and gatherings as it did in the spring of 2020. “I love all events, but it is not right to shut down one and let the others continue,” said Smith. “What good is that?”