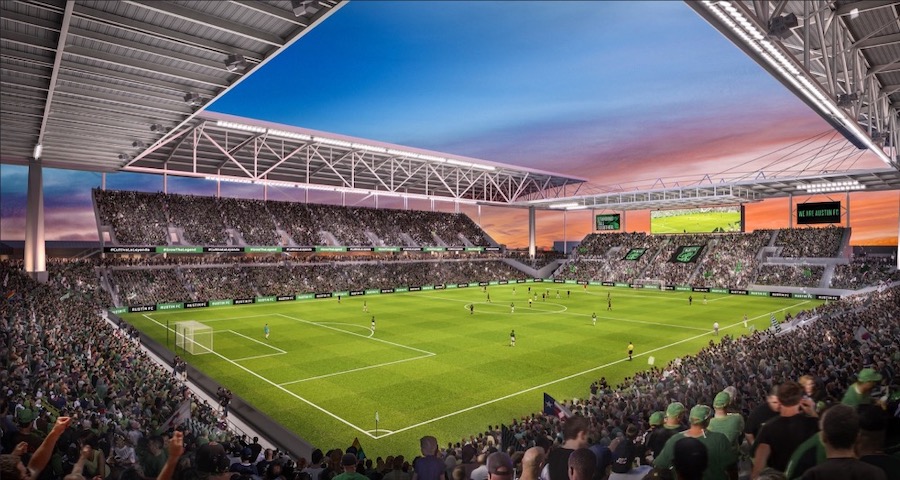 An early rendering of Q2 Stadium, depicting the sellout crowd Austin FC now expects to host for the home opener on June 19. (courtesy of Austin FC)

That dream was put in obvious jeopardy throughout the course of the COVID-19 pandemic, which emptied stadiums and eliminated crowds across the world. But widespread rollout of vaccines in Texas and in the United States came just in time for Austin’s first major league sports event to take place without the restrictions necessary for social distancing. As arenas and stadiums open to full capacity across the nation, including Globelife Park in Arlington and Nissan Stadium in Nashville, where Austin FC played as visitors Sunday, health officials in Austin deemed safe the prospect of hosting over 20,000 soccer fans for the Verde’s home debut.

“The efforts by our community over the past 15 months have led us to a stage where we can once again safely host large events in Austin,” Austin-Travis County Interim Health Authority Dr. Mark Escott said in a statement. “We still have a final push to reach the imminent goal of herd immunity and ask everyone to get vaccinated before school lets out in June.”

Austin FC is deep into an eight-game road trip to open its inaugural campaign. The long stretch of away matches was scheduled in order for construction of Q2 Stadium and surrounding amenities to be completed. However, the decision to hold Austin FC’s first home game in June always added optimism to the idea that the club could potentially host a capacity crowd for the home opener.

“Austin has been looking forward to the opening of Q2 Stadium since Austin FC launched in 2019,” club president Andy Loughnane said. “Today’s announcement is representative of a remarkable community-wide commitment to public health, which will now allow supporters the opportunity to safely participate in a series of historic Q2 Stadium events across the month of June and beyond.”

In addition to Austin FC’s first match, the club and city officials announced that the U.S. Women’s National Team exhibition match against Nigeria, slated to open Q2 Stadium June 16, will also be able to operate at full capacity if necessary.

Austin FC said it will begin reaching out to season ticket holders about securing seats for MLS matches and also begin selling single-game tickets to members of the “Oak Collective” season ticket waiting list. Ticket information for the USWNT match is not yet available.