Austin artist Claude van Lingen’s 9/11 Memorial at Co-Lab Projects (5419 Glissman) honors those who died on September 11, 2001, in the World Trade Center, Pentagon, and Pennsylvania tragedies and pays homage to those who died in the ensuing conflicts in Iraq and Afghanistan. 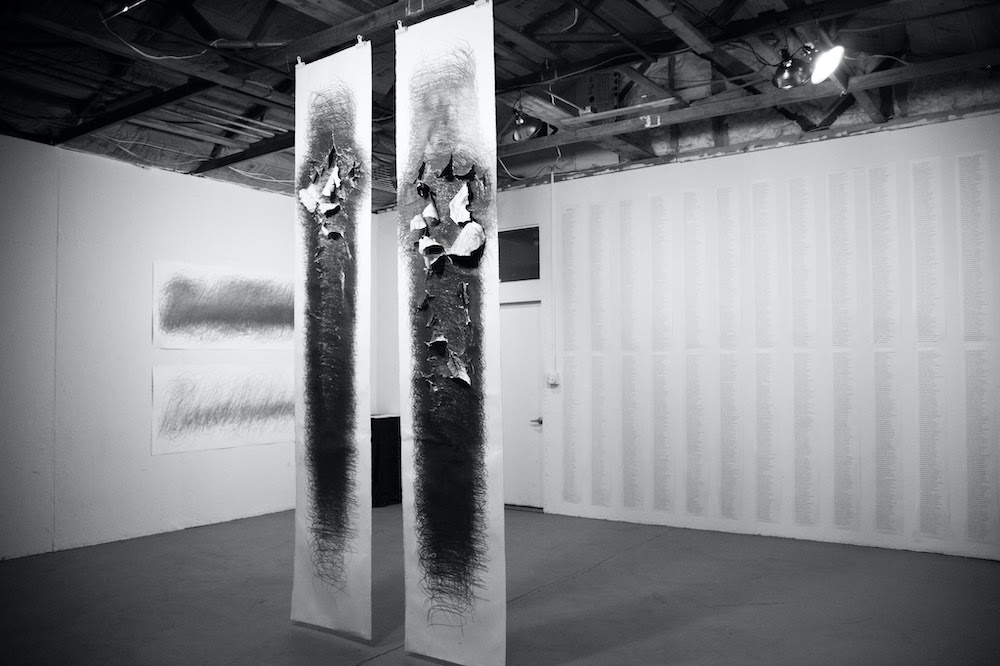 The exhibition centers around two large drawings in which the names of the 2,753 victims of the World Trade Center were written one over the other, in Van Lingen’s signature style, causing the paper to shred and tear. Extending from this focal point are several other drawings memorializing those who died in the Pentagon attack (125), the Pennsylvania crash (39), as well as works commemorating those who died in the wars since October 7, 2001 in Afghanistan (about 2,500) and Iraq (more than 4,000). The names of the latest deaths are regularly updated and written in performance at the openings of 9/11 commemorative exhibitions.

During this memorial exhibition, visitors will be asked to collaboratively create an artwork by writing the names of the victims killed in the 9/11 attacks on a large piece of paper, then sign and date their action on another. Those signatures will be attached to the back of the artwork and framed.

Note: 9/11 Memorial: The 20th Anniversary opens with a reception on Sat., Sept. 11, 4-10pm. A closing reception is scheduled for Sat., Sept. 18, noon-6pm. See the Co-Lab website for details and event guidelines.